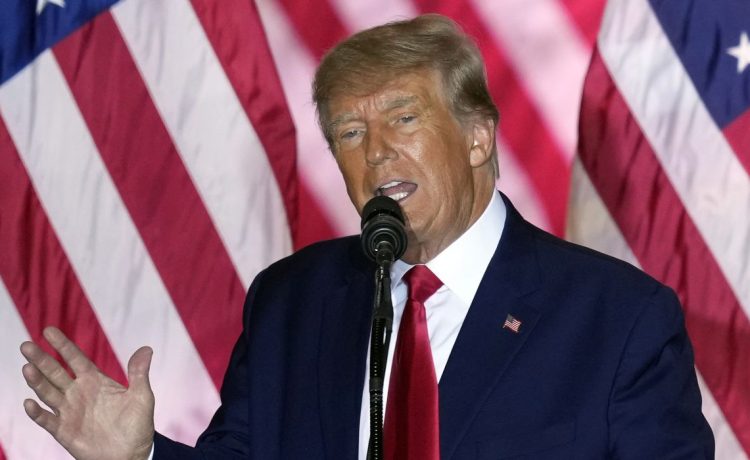 Donald Trump is scolding the media over reports about his remarks about being reinstated as president and terminating parts of the Constitution.

“The Fake News is actually trying to convince the American People that I said I wanted to ‘terminate’ the Constitution,” the former president wrote Monday on Truth Social, the platform he founded after being kicked off Twitter. “This is simply more DISINFORMATION & LIES, just like RUSSIA, RUSSIA, RUSSIA, and all of their other HOAXES & SCAMS.”

Mr. Trump made his initial eyebrow-raising remarks over the weekend after Twitter CEO Elon Musk revealed the extent to which the social network coordinated with the Biden campaign in downplaying a story about Hunter Biden’s laptop.

“A Massive Fraud of this type and magnitude allows for the termination of all rules, regulations, and articles, even those found in the Constitution,” Mr. Trump said in post calling for himself to be reinstated or the 2020 election to be repeated. “Our great ‘Founders’ did not want, and would not condone, False & Fraudulent Elections!”

The remarks prompted a scolding from some GOP lawmakers and Mr. Musk, who tweeted: “The Constitution is greater than any President. End of story.”

Mr. Trump has pushed unproven claims the 2020 election was stolen from him since President Biden was declared the winner.

His post about the Constitution was in response to Mr. Musk’s new details about coordination between Twitter employees and the Biden campaign, which wanted to suppress a New York Post story about Hunter Biden’s laptop in the runup to the 2020 election.

Hunter Biden is the president’s 52-year-old son, and his foreign business dealings will be the target of House GOP investigations in the new Congress.

Fellow Republicans were alarmed by the reports about Twitter’s actions in the runup to the 2020 contest. But they were also dismayed by Mr. Trump’s statements about the Constitution.

“I, first of all, vehemently disagree with the statement that Trump has made,” Rep. Mike Turner of Ohio said on CBS’s “Face the Nation.” “Trump has made 1,000 statements in which I disagree.”

Mr. Turner said the comments could factor into how voters assess Mr. Trump, who recently launched a 2024 presidential bid.

Mr. Lawler told CNN’s “State of the Union” that Americans are “tired of looking backwards” at the ex-president.

• Ramsey Touchberry contributed to this story.