Trump lashes out over polls showing him trailing in GOP matchup with Florida Gov. Ron DeSantis 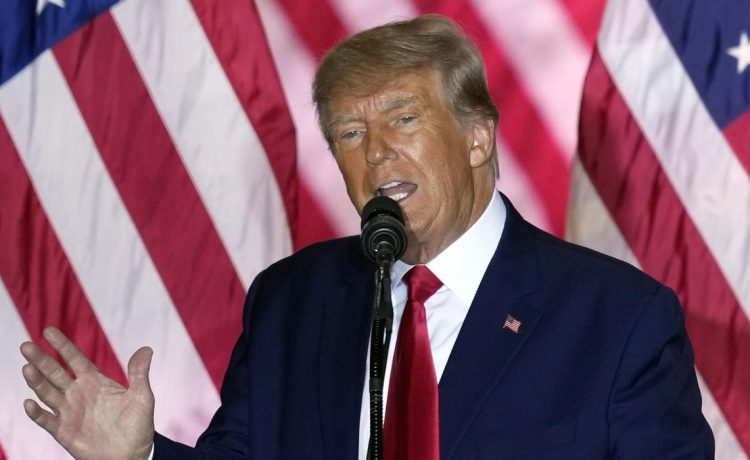 Former President Donald Trump is lashing out at once-friendly media outlets for reporting on polls that show him trailing Florida Gov. Ron DeSantis in a hypothetical 2024 primary.

The ex-president is furious over a Wall Street Journal poll that shows Mr. DeSantis leading Mr. Trump, 52% to 38%, and elicited coverage on Fox News.

A USA Today/Suffolk University poll found him trailing the GOP governor 56% to 33%.

Mr. Trump recently announced a 2024 bid, while Mr. DeSantis hasn’t said whether he plans to run but is widely considered the top alternative for Republicans.

The former president pointed to new polling from McLaughlin & Associates that suggests he leads Mr. DeSantis by a 58%-36% margin, though it showed his own support dwindling from 64% in October while Mr. DeSantis’s support grew from 29%.

“Great polling has just come out on me versus various others, including Biden, but I still have to put up with the same old ‘stuff’ from The Wall Street Journal, which has lost an incalculable amount of influence over the years, and Fox News, whose polls on me have been seriously WRONG from the day I came down the escalator in Trump Tower,” Mr. Trump wrote on Truth Social, the platform he launched after getting kicked off Twitter.

“Same thing happened in 2016,” he wrote, “where Fox and the WSJ went out of their way to give me bad coverage and polling, and say I couldn’t win — UNTIL I WON!”

Political analysts caution that it is early and the 2024 cycle hasn’t begun in earnest. Mr. Trump’s decision to launch his bid came unusually early as he faces a series of civil and criminal probes and unflattering narratives from the House select committee on the Jan. 6, 2021, attack on the Capitol.

Some pundits say polls that show a head-to-head matchup between Mr. Trump and Mr. DeSantis don’t take into account what could be a crowded GOP primary field.

In 2016, Mr. Trump managed to carve up the field and win enough support for the nomination.