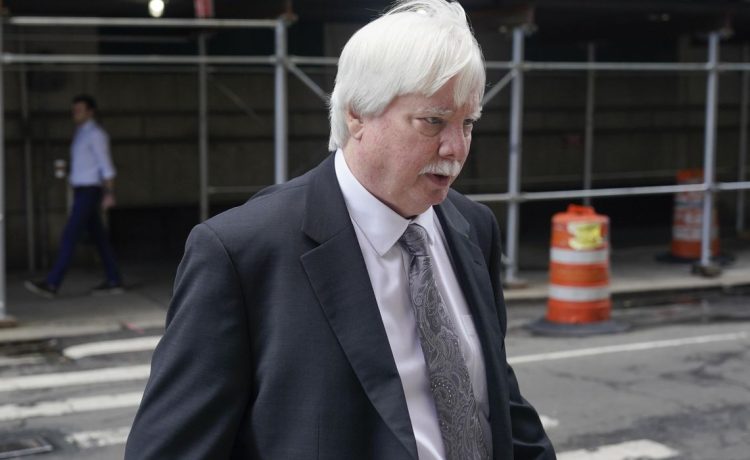 NEW YORK — One of Donald Trump’s top moneymen admitted Thursday to breaking the law to help fellow Trump Organization executives avoid taxes on company-paid apartments and other perks, including by preparing misleading tax returns and failing to report the benefits to tax authorities.

Senior Vice President and Controller Jeffrey McConney testified at the company’s criminal tax fraud trial that he filed false tax returns on behalf of a father-son executive duo whose Manhattan apartment rents were paid by the Trump Organization.

McConney, who was granted immunity to testify as a prosecution witness, also testified that a few years before Trump became president, the company’s accountant raised concerns about the way it paid out holiday bonuses – a topic that has consumed hours of trial testimony.

According to McConney, the accountant warned that the Trump Organization’s dubious and since-discontinued practice of splitting bonus payments between an executive’s salary and one-time independent contractor payments from subsidiaries could jeopardize the law license of one such executive: its top lawyer.

The Trump Organization, the entity through which Trump owns hotels, golf courses and other assets, is accused of helping some top executives avoid income taxes on compensation they got in addition to their salaries.

The company, which could be fined more than $1 million if convicted, has denied wrongdoing. Its lawyers allege that another executive – longtime finance chief Allen Weisselberg – went rogue, concocted the scheme without Trump or the Trump family’s knowledge and lied to the company about what he’d done.

Trump Organization lawyer Susan Necheles kept the jury’s attention on Weisselberg as she questioned McConney on cross-examination Thursday afternoon, showing emails indicating that McConney needed to get permission from Weisselberg to complete even simple tasks, such as approving a $100 expenditure or writing a few sentences to describe the ice rinks the company managed in Central Park.

McConney said that Weisselberg, his boss for years, had wide latitude over the company’s operations and even quoted him as saying that Trump hired him to essentially run the company. Weisselberg has pleaded guilty to taking $1.7 million in off-the-books compensation and agreed to testify as a prosecution witness, possibly next week, in exchange for a five-month jail sentence.

The Trump Organization trial resumed Thursday after an eight-day delay while McConney and the judge, Juan Manuel Merchan recovered from COVID-19. The trial was abruptly interrupted on Nov. 1, just the second day of testimony, when McConney tested positive for the virus during a lunch break.

Merchan wore a blue surgical mask on the bench. About half the jurors also wore masks. McConney, who had been coughing off and on during his testimony last week, didn’t do so nearly as much on Thursday and testified that he was feeling “much better.”

McConney, who said he prepares taxes on the side for a handful of clients, told jurors that he checked “no” on state tax form questions asking if Chief Operating Officer Matthew Calamari Sr. maintained New York City living quarters despite knowing that he had, allowing them both to avoid paying city wage taxes

McConney said he did the same on Matthew Calamari Jr.’s tax forms and did not submit amended tax returns when he learned that he too was living in a company-paid Big Apple apartment.

“Evade is a very strong word,” McConney responded. “I tried to help them any way I could, with some suggestions.”

The Trump Organization also paid for Weisselberg’s Manhattan apartment, Mercedes-Benz cars for him and his wife, furnishings and utilities. Trump personally paid his grandchildren’s school tuition.

McConney, in his third day on the witness stand, testified that he deducted the cost of some executives’ perks from their salaries, reducing their tax liability further. Trump signed off on the salary reductions. Prosecutors showed a 2012 memo noting one such arrangement for Calamari Sr. bearing the former president’s initial – a D resembling a treble clef – and the handwritten notation, “OK.”

A message seeking comment was left with a lawyer for the Calamaris.

McConney, picking up where he left off before the COVID interruption, testified that the Trump Organization altered some pay practices and financial arrangements after bringing in a Washington lawyer to audit its tax practices following Trump’s election in 2016.

Steinglass referred to the changes as a “cleanup.”

But McConney testified that the company was warned years earlier by its own accountant, Donald Bender, that its decades-old way of doling out holiday bonuses – saving money on taxes by paying full-time employees as freelance workers, and possibly writing the payoff as an expense – could imperil then-general counsel Jason Greenblatt’s ability to practice law.

“It had something to do with, he could lose his legal license,” McConney testified.

In 2015, after Bender spoke up, Greenblatt’s bonus was paid entirely as salary.

A message seeking comment was left with Greenblatt, who from 2017-2019 served as an assistant to the president and Trump’s special representative for Middle East negotiations.

McConney tried to justify the split-pay arrangement by saying the company would apportion its bonuses based on work that an executive did for that entity, such as Trump’s Mar-a-Lago estate in Florida. But later he acknowledged such work falls under the normal duties of a CFO like Weisselberg.

Asked why the company didn’t scrap the bonus-pay scheme entirely after Bender said it could cost Greenblatt his career, McConney said: “He’s telling me to stop on one and not stop on the other, it didn’t even enter my mind. … If Donald Bender had reason to tell us to stop, we would’ve stopped.”