Trump prods Musk to release details behind his ouster from Twitter 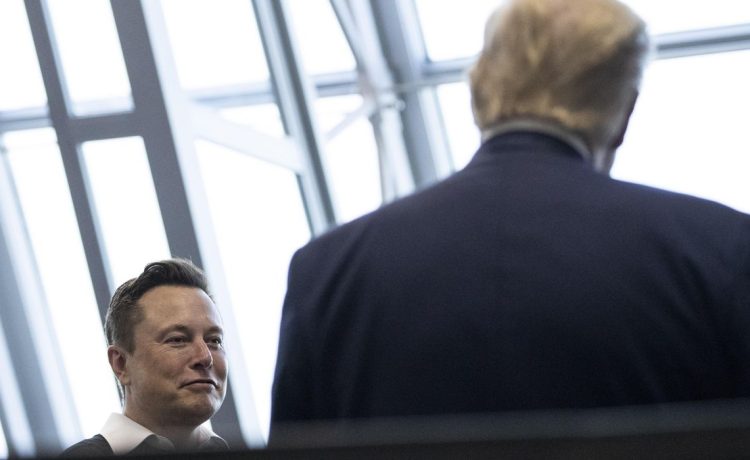 Former President Donald Trump is calling for the next installment of the “Twitter Files” to be about what led the company’s executive to kick him off Twitter.

Since taking over the company, Elon Musk has been pulling back the curtain on how censorship decisions were made at Twitter, and now Mr. Trump wants his treatment highlighted.

Mr. Trump made the suggestion on his Truth Social platform:

“ELON: The Twitter releases are a revelation in that they show, in a very powerful fashion, the FBI and ‘Justice’ illegally colluding, proving conclusively, in one more very powerful way, that the 2020 Presidential Election was Rigged & Stolen. What everyone is REALLY waiting to see, however, is the Twitter information and thought process leading up to the time of the so-called ‘Election,’ and ultimately the “Deplatforming” of the President of the United States. Big moment in history. Thank you!”

Twitter permanently banned Mr. Trump two days after the Jan. 6, 2021, riot at the U.S. Capitol. Twitter said: “After close review of recent Tweets from the @realDonaldTrump account and the context around them — specifically how they are being received and interpreted on and off Twitter — we have permanently suspended the account due to the risk of further incitement of violence.”

Mr. Trump’s call for more information about the 2020 election and his de-platforming followed Mr. Musk’s release Thursday of the second installment of the Twitter Files. He made public internal documents that showed Twitter maintained a suite of tools to silence conservative viewpoints from the platform, placing talk show hosts, activists and respected doctors on a blacklist to limit the visibility of their accounts.

The documents added further evidence of the long-suspected left-wing bent that led to the suppression of the Hunter Biden laptop computer story just weeks before the 2020 presidential election, which was the subject of Mr. Musk’s first edition of the Twitter Files.

The documents were released in a Twitter thread by independent journalist Bari Weiss.

It revealed that, despite previous denials by company executives, screenshots of back-end tools show that Twitter employees applied a variety of tags to users’ accounts to stifle contrarian and often conservative voices without their knowledge.

Twitter had been accused for years of habitually “shadow banning” conservatives but always denied it. Liberals derided the charge as tinfoil-hat talk.

The new documents prove the charges were often true.

Dr. Jayanta Bhattacharya, a Stanford University professor and an outspoken opponent of pandemic lockdowns, was placed on a “Trends Blacklist.”

Ms. Weiss was one of two independent journalists given access to Twitter’s internal files.

Ms. Weiss showed in the thread how Twitter executives denied accusations that they tamped down certain accounts.

“We do not shadow ban.” Twitter’s head of legal policy, Vijaya Gadde, said in 2018. “And we certainly don’t shadow ban based on political viewpoints or ideology.”

Mr. Musk began releasing a deluge of internal documents giving the public a behind-the-scenes look into the platform’s work with well-connected political actors, most of them left-leaning.

After teasing his followers with a promise to disclose “what really happened with the Hunter Biden story suppression,” Mr. Musk last week linked to a Twitter thread by independent journalist Matt Taibbi. That was the first installment of the Twitter Files.

The thread showed the behind-the-scenes deliberations by Twitter executives to suppress a New York Post story about Hunter Biden’s computer laptop, including suspending the Post’s account and blocking users from sharing links to the story via direct message.

Twitter executives decided that the content should be blocked because they could not determine whether the materials on the laptop had been hacked.

“‘They just freelanced it’ is how one former employee characterized the decision,” Mr. Taibbi wrote. “Hacking was the excuse, but within a few hours, pretty much everyone realized that wasn’t going to hold. But no one had the guts to reverse it.”

The initial release ignited a firestorm on Capitol Hill and drew fresh scrutiny to the censorship alliance between Big Tech and the Democratic Party.

Mr. Trump demanded a redo of the 2020 election. He called it a “fraud” perpetuated by the government, Big Tech companies and others that pushed a victory for Mr. Biden.

“Wow! That’s a really big story about Twitter and various forms of government fraud including, specifically, election fraud. The same level of fraud took place with the other Big Tech companies, if not even worse [if that’s possible?],” Mr. Trump wrote on his social media site, Truth Social.

He added: “We are living in a very corrupt country and as they are saying all over the Internet, ‘nothing will be done about it because the Justice Department and FBI are totally corrupt.’ But they’ll keep investigating ‘boxes’ that were legally and openly taken from the White House.”

It has rekindled charges that political censorship by Big Tech helped President Biden win the 2020 election. It has also added fuel to House Republicans’ plans to address this collision.

Mr. Musk, who closed on his $44 billion buyout of the social media platform in October, has vowed to rein in Twitter’s censorship policies.

Mr. Musk said last month that lifting the veil on Big Tech’s suppression of the Hunter Biden laptop story just weeks before the election was crucial for restoring public trust in democracy.