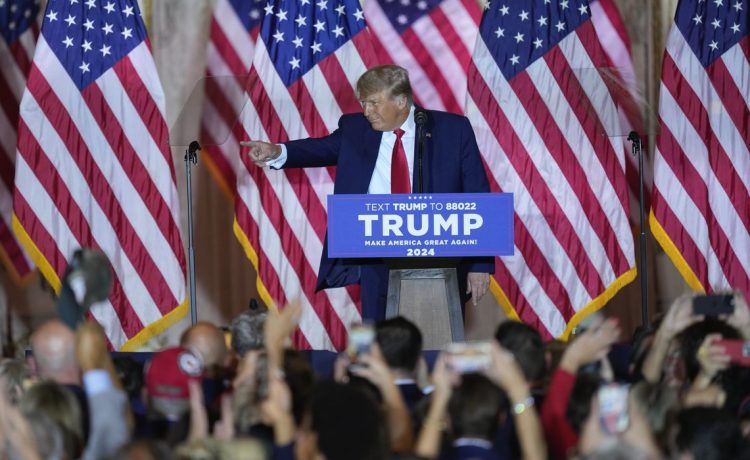 Former President Donald Trump’s decision to launch a 2024 White House bid Tuesday night was met with derision from former aides and prominent Republicans who saw a “low energy” speech from his South Florida estate, though ardent followers said his focus on contrasts with the Biden administration will make him hard to beat.

Mr. Trump is facing mounting legal woes and fallout from his role in a disappointing midterm election season for the GOP and the Jan. 6, 2021, riot at the U.S. Capitol by his supporters.

Yet some Republicans are standing by Mr. Trump as he attempts to become the second U.S. president to serve non-consecutive terms.

“He had this country in the right direction. He’s not a politician. He stood up to the mainstream media. They don’t like it. I understand that. But he stood up for the American people. Look where we’re at now,” Sen. Tommy Tuberville, Alabama Republican, told Fox Business’ “Mornings with Maria Bartiromo.” “If we’re not already in a recession. It’s going to get really, really bad.”

“If President Trump continues this tone and delivers this message on a consistent basis, he will be hard to beat,” Sen. Lindsey Graham, South Carolina Republican, tweeted. “His speech tonight, contrasting his policies and results against the Biden Administration, charts a winning path for him in the primaries and general election.”

But a striking number of Republicans were cool or outright hostile to Mr. Trump’s decision to jump back into the fray, including former members of his administration.

Mr. Trump is facing vocal criticism from within the GOP ranks after a midterm cycle in which an anticipated “red wave” failed to materialize. Republicans are poised to win a narrow House majority but couldn’t retake the Senate, prompting some to fault Mr. Trump for handpicking weak candidates who won their primaries but fell short in the general contests.

Republicans also have a clear alternative in the form of Florida Gov. Ron DeSantis, who romped to reelection on Election Day and polls well among GOP voters.

Many of those openly criticizing Mr. Trump are former or departing officials, meaning they are somewhat insulated from MAGA world’s attacks.

“Trump is correct on Biden’s failures, but his self-indulging message promoting anger has not changed. It didn’t work in 2022 and won’t work in 2024. There are better choices,” tweeted departing Arkansas Gov. Asa Hutchinson.

A former press aide in the Trump White House called the speech “low energy,” one of Mr. Trump’s favorite insults.

“This is one of the most low-energy, uninspiring speeches I’ve ever heard from Trump. Even the crowd seems bored. Not exactly what you want when announcing a presidential run,” tweeted Sarah Matthews, a White House deputy press secretary for Mr. Trump who testified before the House select committee on Jan. 6.

Former Vice President Mike Pence, who fell out with Mr. Trump after the Jan. 6 riot, said “I think we’ll have better choices,” while others said Mr. Trump will be formidable in the GOP primary even if they don’t think his bid is good for the party.

Mr. Trump’s daughter and former adviser, Ivanka Trump, did not attend the Mar-a-Lago kickoff with her husband, Jared Kushner, saying she wants to focus on family instead of politics.

Others seemed ready to take on Mr. Trump because they are in a position of strength within the GOP.

New Hampshire Gov. Chris Sununu, a Republican, said Mr. Trump is running from a position of “weakness” as he faces GOP grumbles and mounting legal woes.

“He’s doing it from a place of defensiveness, of his own self opportunity and weakness,” Mr. Sununu told The Washington Post. “So he’s announcing he’s going to run for president at a low point in his political career. I don’t know how that’s going to work out, man.”

Mr. DeSantis indirectly addressed some of the attacks Mr. Trump threw his way, saying: “You know, at the end of the day, I would just tell people to go check out the scoreboard from last Tuesday night.”

Former Trump White House chief of staff Mick Mulvaney said Mr. Trump’s bid is bad for the party, though the alternatives are likely to split the vote and leave Mr. Trump as the last man standing.

“I think he’s the only Republican who could lose [in a general election],” Mr. Mulvaney told CNN. “Can he be beaten head-to-head by Ron DeSantis or [Republican Sen.] Tim Scott? Sure. But it’s not going to be a head-to-head race. There will be five or six other people in the race and he’ll get the 35% that really support him and under the winner-take-all primary system, he’ll be the nominee.”