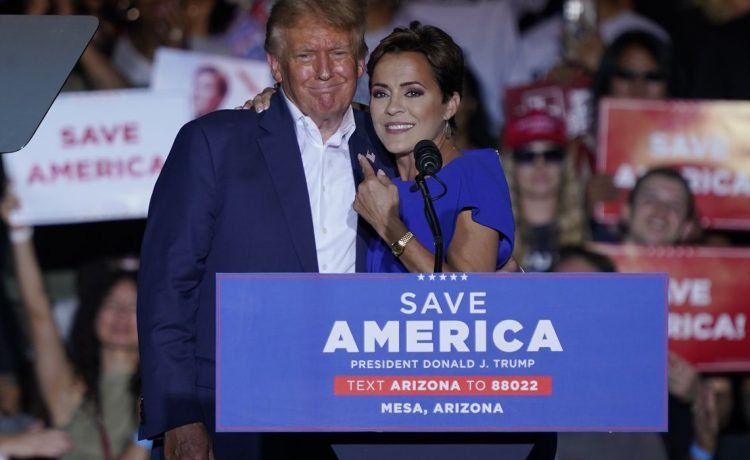 MESA, Arizona — Former President Donald Trump, looking to boost his Republican picks for U.S. Senate and governor in this former GOP stronghold, on Sunday called on his supporters to flood the polls on behalf of Blake Masters and Kari Lake next month

Mr. Trump’s shadow looms large over the 2022 midterm elections, and nowhere is that more true than in Arizona. The state has served as ground zero for Mr. Trump’s stolen election claims, and as a test case for the Biden administration’s shift away from his predecessor’s hardline approach to immigration and border security.

“You can prove that Arizona is still a red state,” Mr. Trump said to the thousands who braved the scorching heat to see him in a dusty lot.

Saying Democratic Sen. Mark Kelly has been a failure, Mr. Trump said, “Arizona you need to vote this extreme radical leftist out of office.”

“He is exactly the kind of new blood we need in the United States Senate,” Mr. Trump said. “Blake will make it his mission to restore the sovereign border of Arizona and protect the jobs, safety, and well-being of the people of your state.”

“He is a tireless champion for free speech, election integrity and for putting America first,” he said.

Mr. Trump also touted Ms. Lake’s gubernatorial bid and urged his supporters to get behind other election-denying Republicans — most notably state Rep. Mark Finchem, the GOP nominee for secretary of state who will oversee Arizona elections if he wins.

Mr. Trump said Ms. Lake is going to be a star.

Mr. Trump said Mr. Biden has been an embarrassment and accused the administration of turning law enforcement against him, his family, his supporters, and pro-life activists.

Mr. Biden, he said, has “completely obliterated” everything he did to strengthen the southern border, opening the doors for the cartels and human traffickers.

“It all happened because of a rigged and stolen election,” Mr. Trump said. “We won it twice and did better the second time.”

Mr. Kelly is running for a full-six-year term after winning a 2020 special election contest to fill out the remainder of late Republican Sen. John McCain’s term. He has had a massive fundraising advantage and held a steady, but slim, lead in the polls, which shows Mr. Victor is pulling some Republicans in his direction.

“I have a question for you, who is ready to send Mark Kelly back to space?” Mr. Masters said here Sunday after entering the stage to Kenny Loggins’ 80s anthem “Highway to the Danger Zone.” “That is exactly what we are going to do in 30 days’ time.”

Mr. Masters, a venture capitalist, is running behind Mr. Kelly in the polls and has faced doubts about the quality of his candidacy. Mr. Kelly has blanketed the television airwaves with attack ads for months.

Mr. Masters, though, proved some naysayers wrong in his first — and only — debate with Mr. Kelly last week, winning rave reviews from Republicans after repeatedly putting the Democrat on the defensive over his record.

Looking to keep the momentum going, Mr. Masters has accused Mr. Kelly of backing policies that have made inflation and gas prices worse and opened the door for illegal immigrants and drugs to come across the southern border.

“His record is horrible,” Mr. Masters said, before vowing to fight to steer the nation in a different direction if elected.

“The future of the country is on the line, so vote like it,” he said. “We are going to make this country great again!”

Ms. Lake, meanwhile, is locked in a tightknit race with Katie Hobbs, the Democratic secretary of state.

Speaking here on Sunday, Ms. Lake said Ms. Hobbs is out of touch with what voters want.

“I don’t need to hire a bunch of out-of-town Washington, D.C., consultants to tell me where Arizona is, I think we are on the same page,” Ms. Lake said.

Ms. Lake said voters are clamoring for the next governor to push for “safe and secure” borders, address homelessness in a more serious manner, and provide kids a “real education — not an indoctrination.”

“I think it comes down frankly to one sentence: We want to replace the woke garbage with common sense,” Ms. Lake said, before urging the crowd to vote.

“We can do it together Arizona because God is with us,” she said. “That same God who parted the Red Sea — that is why he has put us all here in this moment in history — to save this country and create a red wave.”

Mr. Biggs said Mr. Biden is “weak sauce” and said Democrats “are the extremists, they are the radicals.”

Ms. Greene, arguably Mr. Trump’s fiercest supporter in Congress, said the “communist Democrats are destroying the very fabric” of the country. She said Mr. Biden’s immigration moves have opened the door for illegal immigrants who are “replacing your jobs and replacing your kids in your school” and “replacing your culture.”

“Joe Biden is a loser,” the Georgia Republican said, and later assured the crowd Mr. Trump would be the nation’s next president.