The Great Days > News > Trump teases Nov. 15 announcement, urges voters to rally behind his slate of candidates on Tuesday
News

Trump teases Nov. 15 announcement, urges voters to rally behind his slate of candidates on Tuesday 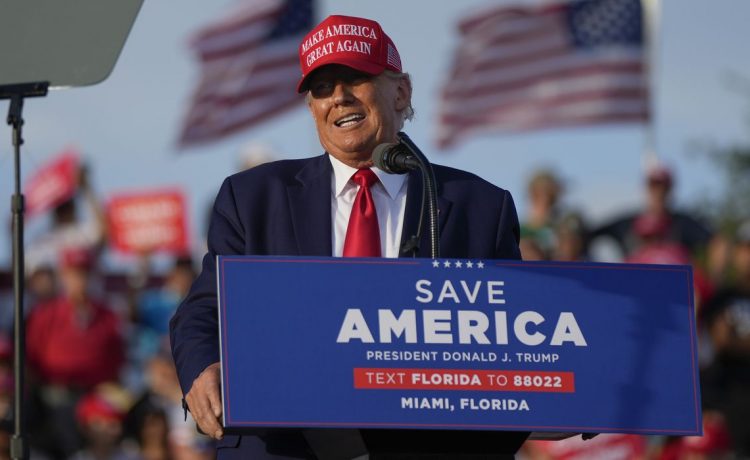 Former President Donald Trump told supporters Monday they can expect a big announcement from him on Nov. 15, teasing his plans for a political comeback with a White House run in 2024.

Mr. Trump said he is holding off on his announcement because he doesn’t want to take the focus away from the 2022 midterm elections, urging votes to rally behind the candidates that have embraced the Make America Great Again movement and won his blessing.

“I would say in the strongest way, it’s a country-saving election, specifically including the election of all the people that … will start to take the country back,” he said at the tail end of a 90-plus minute speech at an Ohio rally ostensibly on behalf of Senate GOP nominee J.D. Vance. “I’m going to be making a very big announcement on Tuesday, Nov. 15 at Mar-a-Lago in Palm Beach, Florida.”

Mr. Trump urged his supporters to rally behind Mr. Vance and the slew of candidates he has endorsed around the country, including Senate nominee Mehmet Oz in Pennsylvania, and both Blake Masters and Kari Lake, the senate and gubernatorial nominee in Arizona.

Mr. Trump has been teasing a possible political comeback for weeks, and the comments at the Ohio rally were the firmest signal that he is serious about running again.

Mr. Trump is without question the immediate frontrunner for the GOP presidential nomination.

He raised carloads of money and in the 2022 primary his endorsement proved to be the golden ticket for nearly every GOP primary race.

Mr. Trump’s opposition proved to be the kiss of death for Republicans whom he deemed as foes.

Mr. Trump’s unproven charge that the 2020 election was ripped away from him by shadowy Democratic figures has become an article of faith among a broad swath of Republicans, many of whom have lost faith in early voting that the party promoted for years.

Still, serious questions loom as to whether the 76-year-old is the GOP’s best bet for winning a general election. President Biden defeated him in the 2020 election, and Mr. Trump is facing a slew of investigations into his business dealings and political activities.

The pending announcement will shift the spotlight onto the slate of other possible 2024 presidential contenders, perhaps most notably Gov. Ron DeSantis of Florida.

Mr. DeSantis is running for re-election in Florida and has built a strong following within the Republican Party. The 44-year-old has been praised for refusing to bow down to his critics while doggedly pursuing a conservative agenda in Florida.

He also has been billed as a more polished Trump-like figure who could connect with moderate Republicans turned off by Mr. Trump’s brash and bombastic style. He also has not gone all-in on Mr. Trump’s stolen election claims.

It is a change in tone from 2018 when Mr. Trump’s endorsement of Mr. DeSantis is credited with playing a major role in his underdog bid for governor. The jab also sparked a round of criticism from Republicans who saw it as an unnecessary — and undisciplined — distraction when the entire party should be focused on winning back the House and Senate.

Mr. DeSantis was not in attendance at the former president’s rally Sunday in Miami. Mr. Trump, however, also urged attendees to back Mr. DeSantis’s re-election bid.

Mr. Trump has been teasing the idea of another run since leaving office in a chaotic fashion.

In his  first post-presidency speech last year at the Conservative Political Action Conference, Mr. Trump asked, “Do you miss me yet?”