Trump’s armor dented by Jan. 6 hearings, but still far ahead in ’24 polling 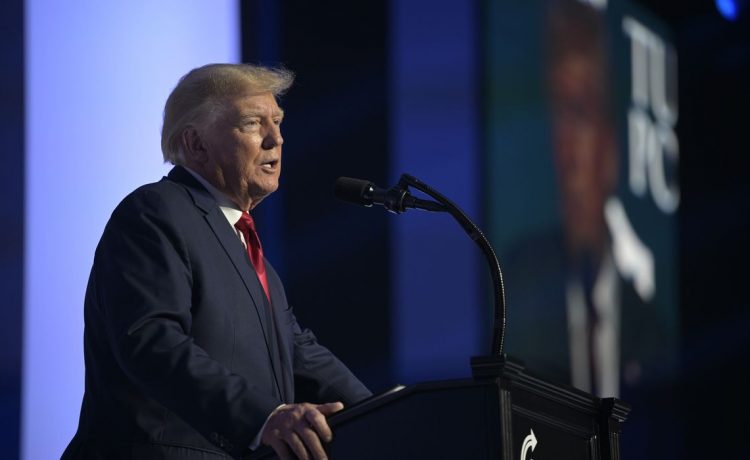 Cracks are showing in the support for former President Donald Trump after eight public hearings by the Jan. 6 committee, although he remains the man to beat for the 2024 Republican nomination.

Mr. Trump’s favorability ratings have slipped in public polling since the hearings began in June. Last April, the former president was underwater — the difference between voters who like him and those who don’t — by only 3.5 percentage points in the Real Clear Politics average of polls.

By last Friday, after the eighth hearing by the House select committee investigating the pro-Trump riot at the U.S. Capitol in 2021, Mr. Trump’s favorability rating was underwater by 10.9 percentage points.

Some conservative media also are distancing themselves from Mr. Trump, in the wake of testimony that he did little or nothing for more than three hours during the riot while his supporters attacked law enforcement officers and vandalized the Capitol.

“As a matter of principle, as a matter of character, Trump has proven himself unworthy to be this country’s chief executive again,” the normally pro-Trump New York Post editorialized last week.

The Wall Street Journal, which like the Post is owned by Rupert Murdoch’s News Corp., contrasted Mr. Trump’s inaction with the efforts by Vice President Mike Pence on Jan. 6, 2021, to call in armed reinforcements at the Capitol.

“Character is revealed in a crisis, and Mr. Pence passed his Jan. 6 trial. Mr. Trump utterly failed his,” the Journal editorialized.

Mr. Trump has dismissed the hearings as “lies” foisted on the public by “the very same people who perpetrated the lies that I was an agent of Russia.”

Whether the hearings will sour any Republican primary voters against Mr. Trump in 2024 is doubtful, given the partisan nature of the panel — all its members were appointed by Democrats and had voted to impeach Mr. Trump.

Republican strategist John Feehery said the hearings are not likely to change the minds of GOP voters.

“I don’t think he’s fatally damaged by these J6 hearings,” Mr. Feehery said. “But I think if he wants to get the nomination again, he’s got to start talking more about the hopes and fears of voters and a little bit less about him being screwed by the Deep State [in the 2020 election]. People aren’t as intimidated by him as they used to be, with Republican primary voters.”

Former Trump senior counselor Kellyanne Conway, in an interview with The Washington Times this month, also said she has been encouraging Mr. Trump to stop talking about his 2020 election loss and to focus on the nation’s future.

The majority of polls still show Mr. Trump as the clear favorite among GOP voters for the party’s 2024 presidential nomination.

In a New York Times/Siena College survey this month, Mr. Trump received the support of 49% of GOP voters, although Florida Gov. Ron DeSantis did get 25%. A Politico/Morning Consult poll last week had Mr. Trump as the favorite of 53% of GOP voters, with Mr. DeSantis getting 23%.

In a straw poll Sunday by Turning Point USA, more than three-quarters of the young activists, 78.7%, said they would vote for Mr. Trump, compared with 19% for Mr. DeSantis and 1% for South Dakota Gov. Kristi Noem.

At his latest rally, on Friday night in Arizona, Mr. Trump again sounded like a man who intends to announce his candidacy very soon. He gave a speech that was a blend of his 2020 election grievances and a long list of examples of how President Biden has destroyed the nation in less than two years.

“I ran twice, I won twice and did much better the second time than I did the first, getting millions more votes in 2020 than we got in 2016,” Mr. Trump said.  “And now, we may have to do it again. Look at what has happened to our country in less than two years. Our country, it’s like a different place. It’s so sad to see.”

He cited the highest inflation in four decades, uncontrolled illegal migration at the Southern border, and high crime in cities across the U.S.

Mr. Trump says the Jan. 6 hearings are aimed only at preventing him from running again.

“They want to damage me in any form so I can no longer represent you,” he said at the Arizona rally. “If I renounced my beliefs and if I agreed to stay silent and if I stayed home and took it easy; if I announced that I was not going to run any longer for political office, the persecution of Donald Trump would immediately stop. But that’s not what I do. I can’t do that because I love this country and I love you.”

Trump-endorsed Senate candidate Blake Masters of Arizona said of the former president, “he saved this country once, and I don’t know about you, but I got a feeling that he’s just getting started.”

Lindy Li, a Democrat who co-chairs the Justice Unites Us Super PAC that focuses on Asian-American voter turnout, pointed to the criticism of Mr. Trump in conservative media as proof that the Jan. 6 committee’s hearings are “working, ” i.e., hurting Mr. Trump.

“Half of the country now thinks he should be charged,” she tweeted. “This shift was not inevitable. The Jan. 6 Committee hearings are working. Don’t let anyone tell you otherwise.”

Mr. Feehery said the former president needs to stop talking about his claims of the 2020 election having been “stolen” from him in states such as Arizona and Wisconsin if he wants to win in 2024.

“Trump has not done anything to really talk about how he’s going to fix inflation or other problems,” he said. “He’s talking about past grievances instead of future solutions, and I think that’s what’s hurting him.”

“I had an election Rigged and Stolen from me, and our Country The USA is going to Hell. Am I supposed to be happy?” he wrote.