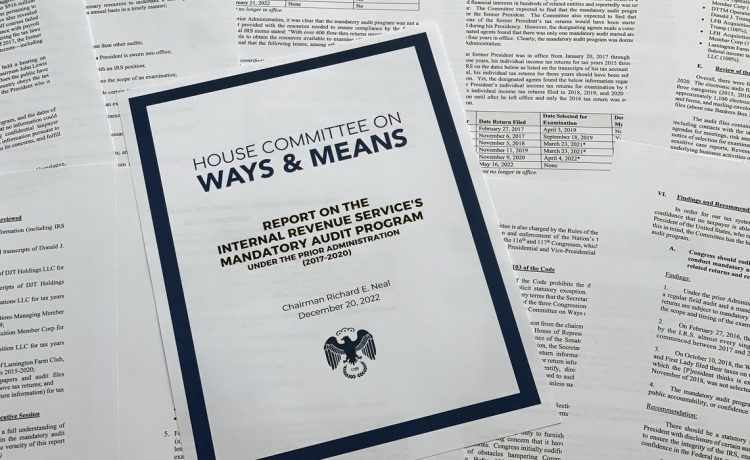 The top Republican on the House Ways and Means Committee laid into Democrats on Sunday for releasing former President Donald Trump’s tax returns after years of legal battles and just days before the GOP takes control of the House.

The documents revealed that the former president‘s real estate conglomerate reported years of multimillion-dollar losses, prompting jabs from Democrats eager to chip away at his self-proclaimed success as Republicans warned of setting a “dangerous precedent” of their release.

“Every American ought to be frightened by this precedent because the enemies list is back, and you might find yourself on it,” Rep. Kevin Brady, Texas Republican and ranking member of the House Ways and Means Committee, said on “Fox News Sunday.”

“This isn’t about whether President Trump should’ve released [them]. That’s not the law, it’s the tradition,” Mr. Brady continued. “This is a dangerous new precedent. It overturns 50 years of protections for American taxpayers.”

From 2015 to 2020, Mr. Trump paid anywhere from zero to $1 million in taxes annually, details that came after he had rebuffed tradition by refusing to disclose his tax returns as a presidential candidate.

SEE ALSO: Rep. Kevin Brady sounds off on release of Trump taxes: ‘Every American ought to be frightened’

“For someone who brags about his riches, his taxes show he is a loser,” Rep. Jackie Speier, California Democrat, wrote on Twitter. “Now we understand why he didn’t want us to see his tax returns.”

The House Ways and Means Committee provided Mr. Trump‘s naysayers with additional ammo, capping a years-long fight by the ex-president to keep the 6,000 pages of records from the public’s eyes.

The filings show that in 2020, more than 150 of Mr. Trump’s business entities listed negative qualified business income. Coupled with almost $9 million in carried-forward losses from previous years, Mr. Trump’s qualified losses amounted to more than $58 million for the final year of his term in office.

Still, the revelations provided little — besides gloating such as Ms. Speier’s — for Democrats to talk about over the weekend, despite Mr. Trump making another run at the White House.

“I think you have to start him out as the frontrunner simply because he’s polling that well. He’s the former president. But as I have said all through 2022, he does not define the Republican Party,” Mr. Hutchinson said on ABC’s “This Week.”

“We have to have other voices. That’s the key thing for the future. And whenever you look at what’s happened with Donald Trump, since he announced that he’s going to run again for president, is that you have continued chaos” surrounding him, the outgoing governor said Sunday.

Mr. Trump has since blasted Democrats for releasing his taxes, writing in posts on his social media site Truth Social and a statement that the “radical left Democrats have weaponized everything, but remember, that is a dangerous two-way street!”

Congress has the authority to obtain any individual Americans’ taxes, but Republicans say it was a pure abuse of power and that the “investigative function” claims used in court were mere pretexts.

Still, they took heart from saying the returns have no evidence of wrongdoing in his businesses, contrary to accusations from Democrats.

But, she noted, now “everyone gets to see how successful Pres Trump is & that he always followed the IRS rules.”