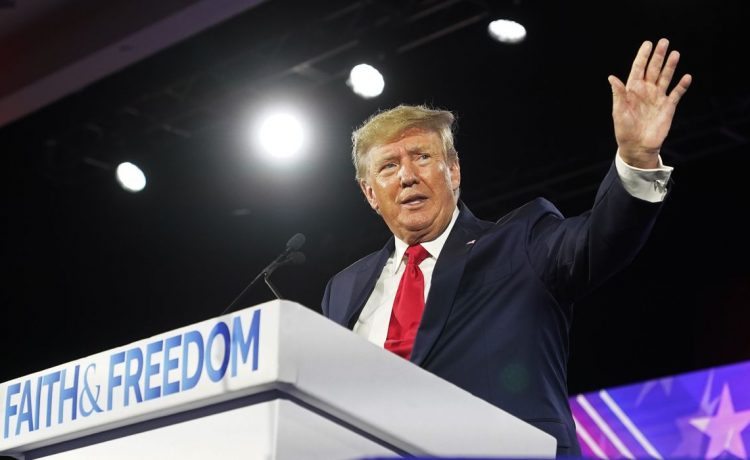 Republicans Tuesday concluded a 72-hour push to galvanize GOP voters in Georgia’s Senate runoff, where Herschel Walker, one of former President Trump’s most prominent endorsements, will test Mr. Trump’s hold over the party one last time before the 2024 presidential campaign ramps up.

Mr. Walker, 60, is facing Democratic incumbent Sen. Raphael Warnock, 53, who won the seat in a 2021 special election and is seeking a full term.

Polls show Mr. Walker consistently lagging behind Mr. Warnock and a loss would serve as a final black eye for Mr. Trump in what was a bitterly disappointing midterm election for the GOP.

Many of Mr. Trump’s top endorsements in key swing states lost on November 8, defying predictions of a red wave. The losses left Republicans in the House with a bare majority and kept the Senate in the hands of Democrats.

The lackluster results for the GOP also diminished Mr. Trump’s image as a powerful party leader with significant leverage over the GOP base and raised questions about his viability in 2024.

The former president last month announced his intention to run for the White House again, ignoring pleas from the GOP to wait until after the Georgia runoff.

Some Republicans saw Mr. Trump as a distraction in their bid for a victory in the Georgia Senate race. A Walker win would leave the Senate evenly split, although Democrats would keep control of the gavel thanks to the tie-breaking vote of Vice President Kamala Harris.

Mr. Walker and Mr. Warnock were forced into a runoff after neither won more than 50% of the vote in the Nov. 8 general election. In that race, Mr. Walker trailed Mr. Warnock by 37,000 votes, failing to capitalize on the popularity of Gov. Brian Kemp, a Republican who led the Georgia ballot and beat Democrat Stacey Abrams by 7 points.

Republicans have dumped millions of dollars into the effort to elect Mr. Walker but they have been significantly outspent by Democrats in the race.

Super PACs have spent $16 million more on Mr. Warnock than Mr. Walker in what has become the most expensive race in 2022, according to OpenSecrets, which tracks political spending.

Republicans were counting on a strong in-person turnout on Election Day after Democrats got a head start with early voters and won a court battle allowing Saturday voting after Thanksgiving.

Mr. Kemp, a Trump foe, distanced himself from the Walker campaign during the midterm election as Mr. Walker worked to deflect news stories about past personal problems and questions about his qualifications. Safely elected to a second term, Mr. Kemp is helping Mr. Warnock in the runoff.

Mr. Trump has largely been absent.

He first endorsed Mr. Walker with great fanfare in the Georgia Republican primary but made no appearances ahead of the general election. Mr. Trump also stayed clear of the Peach State ahead of the runoff and instead participated in a tele-rally for Mr. Walker on Monday.

Republicans have urged Mr. Trump to keep his distance to avoid rallying more Democrats to go to the polls.

Mr. Trump was criticized this month for hosting a dinner for rapper Ye, formerly known as Kanye West. Ye, who brought along White nationalist Nick Fuentes, has recently gone on antisemitic rants.

Mr. Trump, who continues to argue the 2020 election was rigged in favor of President Joe Biden, is defending his endorsement record, posting on his Truth Social media site that his record on endorsements in the general election was 232-22.

He posted a message Monday to Georgia voters on Truth Social to go to the polls on Tuesday.

“To all MAGA Voters, that is, people that want to Make America Great Again and Put America First, tomorrow is a big day. Vote for Herschel!”