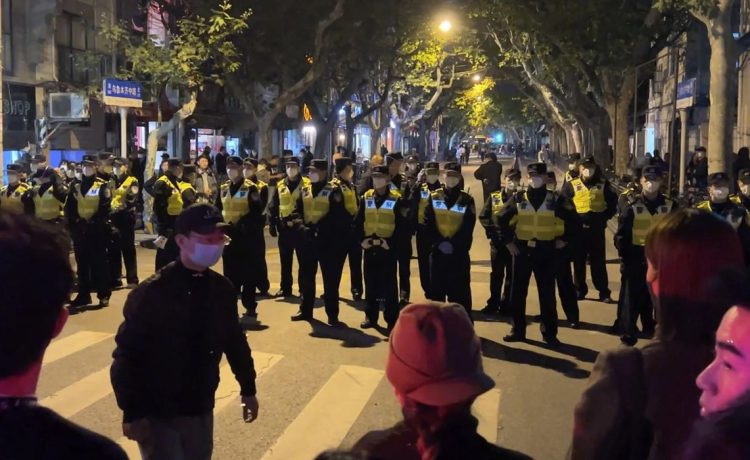 Twitter ranked 10th among all free apps downloaded in Apple’s App Store in China on Tuesday, up from 150th last week, according to app analytics company Sensor Tower. The app skyrocketed in the rankings for China in recent days as protesters demonstrated against the communist regime’s COVID lockdowns.

China has long restricted Twitter’s availability but it remains accessible to people who successfully use virtual private networks and other mechanisms to bypass the technical blockade, which is also known as the “Great Firewall.”

Whether the growing downloads are attributable to usage by protesters demonstrating against China’s COVID lockdowns is uncertain but western journalists have used the platform to disseminate news about the people gathering in the streets and police arrests.

Searches on Twitter for Chinese cities such as Beijing reveal spammy and pornographic content instead of information about the tumult.

The Stanford Internet Observatory’s Alex Stamos amplified an analysis estimating that more than 95% of tweets returned in response to searches for the term Beijing come from spam accounts.

“I didn’t really consider leaving Twitter until this PRC spam op,” Mr. Stamos said Monday on Twitter. “We are rapidly approaching the point where any political discussion will be dominated by organized influence teams and more lighthearted topics by spam.”

The increase in Twitter downloads in China and the spam posts overwhelming protest news also comes as new Twitter owner Elon Musk said Apple has threatened to remove the social media platform from its App Store.

“Apple has also threatened to withhold Twitter from its App Store, but won’t tell us why,” Mr. Musk said Monday on Twitter.

Apple’s business relies upon China’s workers. The world’s largest iPhone factory is in China and faced an uprising from workers last week, according to CNN.

The American tech behemoth has made changes to its products that could limit how efficiently information is shared in China, according to reports.

The file-sharing tool AirDrop available on Apple devices was updated earlier this month with new limitations restricting how widely information could be shared and the timeframe in which messages could be dispersed within China, according to Quartz, which said protesters in Hong Kong had previously used the tool to communicate.

Apple is far from the only American tech company with exposure to China. For example, Mr. Musk’s Tesla manufactures vehicles in China and Mr. Musk hosted China’s ambassador at a Tesla factory in California earlier this year, which China’s embassy in D.C. documented on its website.

Apple did not immediately respond to a request for comment on Tuesday.