Twitter Reacts To Mia Throwing A Drink On Wendy 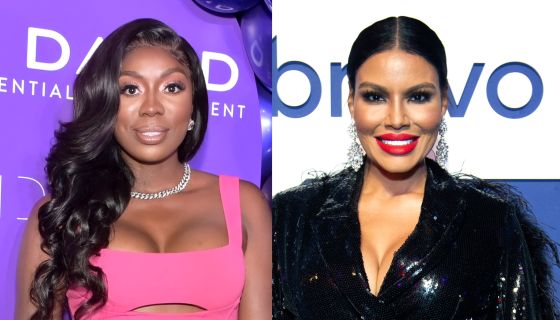 I’m so sorry but between Ashley’s comment and Wendy yelling “Look at the CEO” I cant stop laughing.

This is living rent free in my head forevaaaaaa #RHOP pic.twitter.com/w185I6dE1a

Twitter is ABLAZE over the latest episode of The Real Housewives of Potomac where Mia Thornton threw her drink at rival Dr. Wendy Osefo during a heated dinnerfuffle that finally popped off after weeks of anticipation across the Bravoverse.

The way this escalated. #RHOP pic.twitter.com/a5zTowgDe0

As previously reported, Sunday’s episode showed the continuation of the cast trip to Miami that swerved left when Mia told Wendy about the ‘beef’ Peter Thomas (who she considers family) has with her while dining with the group at Bar One.

“The only man I let know I’m coming into town is my husband,” said Wendy, doubling down.

“Sweetie, maybe you talk to other men like that.  “Maybe that’s how you and your husband play, me and my husband don’t play like that, period!” said Wendy. “You’re telling me to call some guy while I’m in town, I’m not in town for business.”

They then traded shade about credentials with Mia discussing being a boss in the boardroom as a Black CEO and Wendy firing back with her credentials as a professor. Moments later, the drink was thrown and Mia demanded that Wendy stand to her feet before she was escorted away by security.

She was the victim, professor, bone collector and commentator all in one episode. I hope the other girls are gagging over all the support she’s receiving tonight #RHOP #TeamWendy pic.twitter.com/pFPPmNuhk3

Robyn Dixon was also seen calling Wendy “antagonistic” while filming what was going down like she was a camera person for TMZ.

“Do you wanna fight? Then fight,” said Robyn while Wendy continued to argue with Mia.

“You and your husband can go f*** other women and men,” said Wendy to Mia before throwing more shade and, at one point, asking her if she was “f***g Peter Thomas.”

When Mia returned to the table, Robyn was fresh off telling Wendy that she was antagonizing Mia because “she kept talking” [DEEP THUNDEROUS SIGH] and a calmer Mia somehow spun things on Karen and accused her of defending Wendy.

Gizelle Bryant followed suit and said Karen was “humping the fence.” In the midst of things, Wendy stood up and told Mia that she “let her slide with the motherf***g drink” but warned Mia about putting her hands in her face.

Mia called Wendy “ghetto” and went off again when Wendy ordered her to shut up while questioning her CEO status.

At that point, an irate Mia then apparently broke several of her fingernails while trying to get to Wendy and she was semi-successful as she popped Wendy with her purse.

In the aftermath of the big blowup, the Green-Eyed Bandits made it clear whose side they were on and fans are UP-SET.

“She was baiting you you did exactly what she wanted you to do,” said Robyn while Gizelle agreed.

As you can imagine, Mia and the Bandits are being BLASTED by #RHOP fans who are accusing them of colorism (AGAIN) and bullying (AGAIN).

ME anytime Robyn interjects in something that has nothing to do with her! #RHOP pic.twitter.com/pScye9uYYb

“I’m not gonna hear Mia empathizers or somebody who is okay with violence now,” said Wendy before calling Gizelle a hypocrite. “But when Monique did it to Candiace she was against violence.”

Naturally, Mia deleted her Twitter and scampered off social media after getting relentlessly dragged to Hell and back.

Mia has deleted her Twitter and Jacqueline’s niece comes out in defense of her aunt 👀 #RHOP pic.twitter.com/3AsInmRyuD

How did you feel when Mia threw the drink on Wendy? Tell us down below and peep the Twitter hysteria over Mia and Wendy’s messy drink throw on the flip.