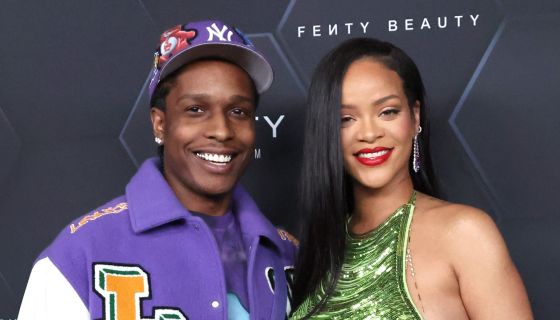 That is definitely Rihanna’s baby. 😄🥰 pic.twitter.com/8MN40JATqm

Social media is buzzing over Rihanna‘s long-awaited Rih-veal of her adorable baby boy who shattered the whole entire internet at only 6-months-old.

The first photos of Rih & Rocky’s bundle of joy were posted exclusively by Hollywood Unlocked which shared a carousel of pictures of the baby this past weekend.

The first snap shows the pair’s son in a white onesie, sucking on a matching pacifier as he stares straight into the camera. The next flick gave us some father-son fuzzies, with Rocky holding up his boy wearing only a diaper and a floral scarf.

The last picture is another of A$AP and his first child who, this time, are they’re dressed more luxuriously. The little one is wearing what seems to be Chrome Hearts leather shorts along with a textured long sleeve top as dad holds him up and smiles from behind.

A few hours later, Rihanna shared an ovary-melting video of the little one taking a ride in the backseat of their car on TikTok.

Rihanna posts a video of her baby on TikTok pic.twitter.com/xp7axDkOeA

In the now viral clip with over 5 million likes, we see the 6-month-old flashing a huge smile at the camera, proving just how much he looks like his mama. The video proceeds to show him trying to grab the camera which explains Rih captioning the video, “hacked” as if he was the one to post the clip.

baby fenty is a perfect mixture of rihanna and rocky 😭 pic.twitter.com/Xhsh33ytIC

What do you think the baby’s name is? Tell us down below and peep the Twitter hysteria over Rih’s big Rih-veal on the flip.