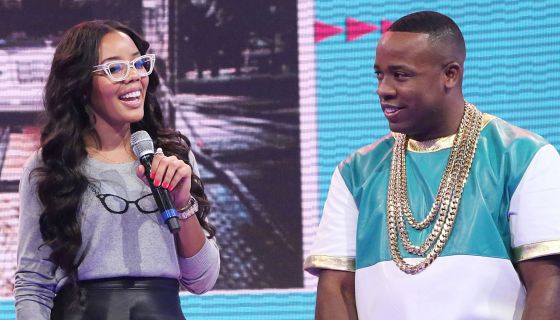 Manifest the love of your life today!

Social media is ABLAZE over Yo Gotti manifesting the girl of his dreams SIX YEARS after professing his love for her on smash hit single ‘Down In The DM.”

Fast-forward to New Year’s Eve where Angela Simmons stunned alongside Gotti who matched her fly in an all-black velvet suit and icy jewelry while holding a bottle of champagne in one photo and an umbrella for Angela in another.

Simmons went on to post another picture from the same photoshoot, celebrating the new year while pouring that bottle of champagne in the back of the Rolls Royce.

Yo Gotti wasted no time letting everyone know he was fine being patient to get the girl of his dreams.

“Ain loss a crush since High School,” he wrote, posting a behind-the-scenes video of their photoshoot.

This came three years after Gotti appeared on The Real and hail mary’d another shot at Simmons in a feel-good clip where he can seen blushing while surrounded by heart effects.

Even after dropping a song mentioning her Yo Gotti went on The Real and shot his shot again at Angela Simmons in 2016 pic.twitter.com/B9foHora1A

Would you chase your crush for six years? If not, why? Do you think Angela and Gotti will get married? Tell us down below and peep the Twitter hysteria over Yo Gotti FINALLY pulling Angela on the flip.