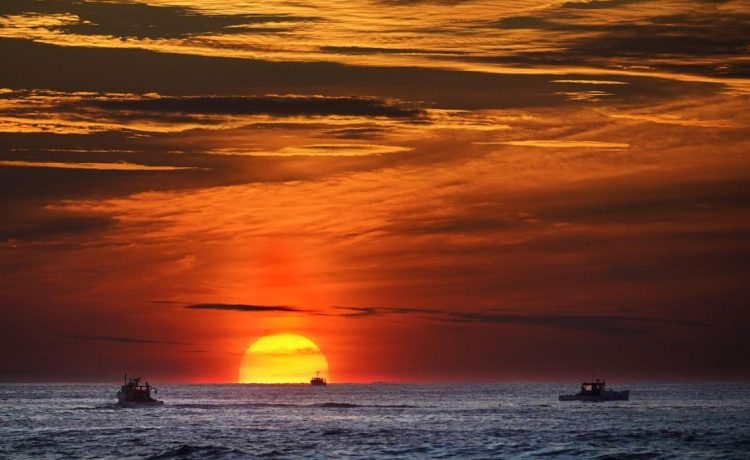 A three-day search for two mariners and their dog ended when the trio were found in their sailboat by a Chinese fuel tanker 214 miles east of Delaware, the U.S. Coast Guard announced Tuesday.

Boaters Kevin Hyde and Joe Ditomasso, along with the unnamed canine, set out from Cape May, New Jersey, to Marathon, Florida, in late November. Before being found Tuesday, their last contact with family was on Dec. 3, as they departed Oregon Inlet, North Carolina.

On Sunday, the two were reported as overdue to the command center of the Coast Guard’s Fifth District, which spans the mid-Atlantic from New Jersey to South Carolina.

Authorities proceeded to put out informational broadcasts, and reached out to commercial vessels directly for help in locating the men’s vessel, the Atrevida II. The Coast Guard would use its own vessels, along with Navy ships and commercial and recreational craft, as part of the three-day search effort.

“Coast Guard, Navy, and maritime partners searched a combined 21,164 square miles of water, spanning from northern Florida to the waters east of New Jersey,” the Coast Guard noted in its announcement.

The Atrevida II, meanwhile, could not operate its own radio and navigation systems due to a lack of fuel. The sailboat was also de-masted, according to the maritime trade publication Maritime Executive.

It took the appearance of another commercial ship to save the two friends and their dog.

The Silver Muna, a Chinese chemical tanker, was on the last day of its own voyage from the Netherlands to New York when it spotted the Atrevida II, according to Maritime Executive.

Mr. Hyde and Mr. Ditomasso waved their arms, as well as a flag, to gain the attention of the Silver Muna. At around 4:18 p.m. Tuesday, the two men and the dog were brought aboard the Chinese vessel, according to the U.S. Coast Guard.

Mr. Ditomasso and Mr. Hyde were evaluated by the Silver Muna’s medical staff, and are slated to be reunited with their families. The Coast Guard picked them up at around 2 p.m. Wednesday in New York after the trio was dropped off by the tanker, according to WPVI-TV, the Philadelphia ABC affiliate.

“This is an excellent example of the maritime community’s combined efforts to ensure safety of life at sea. We are overjoyed with the outcome of the case and look forward to reuniting Mr. Hyde and Mr. Ditomasso with their family and friends,” Coast Guard spokesperson Cmdr. Daniel Schrader said.

In light of the radio going dead on the Atrevida II, Cmdr. Schrader noted the necessity of preparation.

“We also want to highlight the importance of proper safety equipment … Having an emergency position indicating radio beacon, or ‘EPIRB,’ allows mariners to immediately make contact with first responders in an emergency,” he said.

The family of the two men are relieved that they are back on terra firma, their worries erased by a phone call from authorities.

“They just said they found them and honestly — I didn’t care what else they said,” daughter Natalie Ditomasso told WPVI-TV.