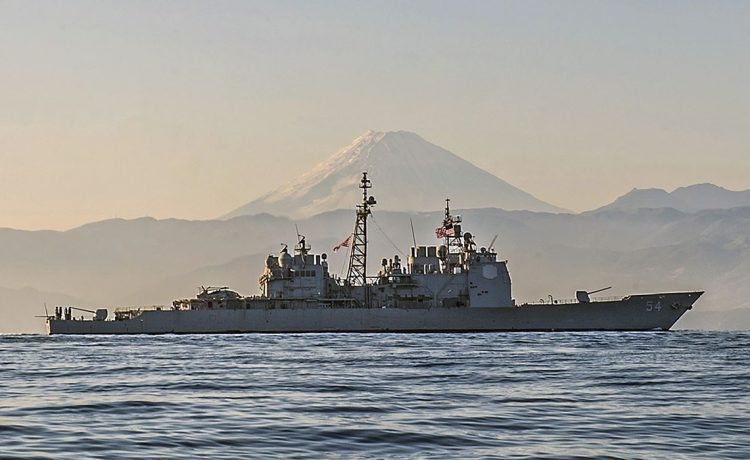 Two American warships sailed through the Taiwan Strait on Sunday for the first time since House Speaker Nancy Pelosi’s trip to Taiwan earlier this month, a visit that sparked an angry reaction from Beijing and ratcheted up tensions between the U.S. and China.

The Navy’s 7th Fleet said the USS Antietam and USS Chancellorsville conducted the routine mission “through waters where high seas freedoms of navigation and overflight apply in accordance with international law.”

“These ships transited through a corridor in the Strait that is beyond the territorial sea of any coastal state,” the 7th Fleet said in a statement. “The ship’s transit through the Taiwan Strait demonstrates the United States’ commitment to a free and open Indo-Pacific. The United States military flies, sails, and operates anywhere international law allows.”

The Navy routinely conducts such maritime missions in the Pacific to push back on Chinese claims over international waters. The 100-mile strait, which separates the island of Taiwan from China, is of particular strategic importance.

Sunday’s transit is especially noteworthy because it came just weeks after Mrs. Pelosi’s visit to Taiwan, which China considers a breakaway province.

The U.S. takes no formal position on Taiwan’s status as an independent nation but retains informal relations with the island and is required by federal law to help ensure its defense against a potential attack.

The Chinese military reacted angrily to Sunday’s mission and delivered a not-so-subtle warning to the U.S. Navy.

Chinese forces “are on high alert and ready to foil any provocation at any time,” said senior Col. Shi Yi, spokesperson for the People Liberation Army’s Eastern Theater Command.

China has conducted numerous military drills near Taiwan in the weeks since Mrs. Pelosi’s trip. The House speaker was the highest-ranking U.S. official to visit the island in 25 years.

In the weeks since, other American lawmakers have followed suit, further angering the Communist government in Beijing. Most recently, Sen. Marsha Blackburn, Tennessee Republican, visited Taipei and spoke at Taiwan’s Ministry of Foreign Affairs.

“One of the reasons I’ve come to Taipei to have these conversations with Taiwan’s leaders is because we can’t afford to let the Chinese Communist Party write the world’s foreign policy,” she said. “For decades, any nation with enough power to challenge Beijing has begged somebody else to jump in and help do that job.”

“The only way we can stop and reverse the rise of authoritarianism around the globe is to do everything we possibly can to make sure the authoritarians fail,” she said.