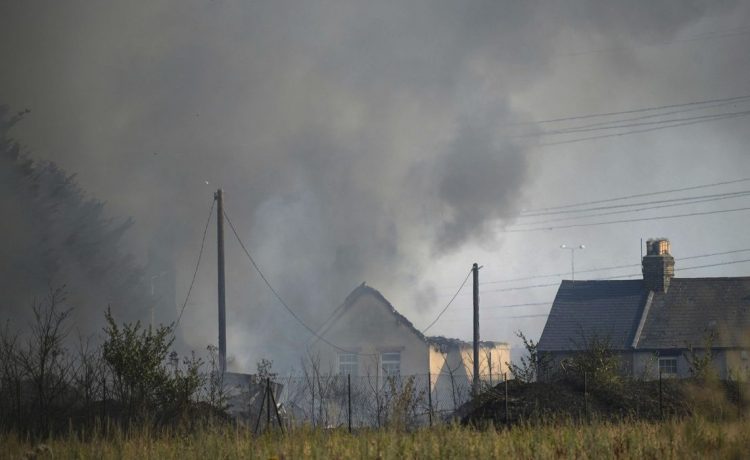 Forecasters predict London will reach a high of 26 Celsius (79 Fahrenheit) on Wednesday, down from the record 40.3C (104.4F) set Tuesday at Coningsby in eastern England.

Still, the main train line from London to Edinburgh will remain closed until noon as crews work to repair power lines and signaling equipment damaged by a heat-related fire on Tuesday, according to the London North Eastern Railway.

The London Fire Brigade had its busiest day since World War II on Tuesday as firefighters received more than 2,600 calls and at one point were fighting 12 fires simultaneously, Mayor Sadiq Khan said. At least 41 properties in the city were destroyed, he said. Sixteen firefighters were treated for smoke inhalation and other injuries.

Even as temperatures began to cool overnight, smoke hung in the air across the city of almost 9 million people.

One of the biggest fires was in Wennington, a village on London’s eastern outskirts, where a row of houses was destroyed by a blaze that also raced through tinder-dry fields nearby.

Resident Tim Stock said he and his wife fled after the house next door caught fire and the blaze rapidly spread.

“I didn’t pick (my) driver’s license up, or birth certificates, anything, so I lost everything,” he told the i newspaper. “Photographs, records, everything’s gone, but the only good thing is we’re all OK.”

Dozens of places in Britain saw temperatures approach 40 C (104 F) on Tuesday, smashing the U.K.’s previous record of 38.7 C (101.7 F), set in 2019. The weather walloped a country completely unprepared for such heat, where few homes, schools or small businesses have air conditioning.

Despite lower temperatures on Wednesday, the fire danger remains high because hot, dry weather has parched grassland around the city, Khan said.

“Once it catches fire it spreads incredibly fast, like wildfires like you see in movies or in fires in California or in parts of France…,” Khan told the BBC. “I’ve just spoken to the fire commissioner. He’s still concerned about the ground being dry and the speed of fire spreading.”