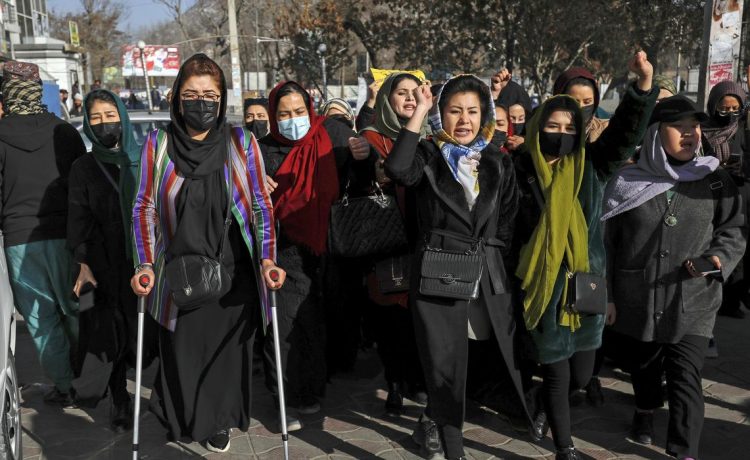 KABUL, Afghanistan (AP) — The top U.N. official in Kabul met with a Taliban government minister in Afghanistan’s capital on Monday, following a decision by the country’s new rulers to bar women from working for non-governmental organizations, the U.N. mission said.

The measure – the latest in restrictions on women’s rights and freedoms in Afghanistan — was announced on Saturday by Qari Din Mohammed Hanif, the Taliban economy minister. It was imposed allegedly because some female NGO employees in Afghanistan were not wearing the Islamic headscarf, or hijab, correctly.

Hanif at the time said that any organization found not complying with the order will have its license revoked.

The U.N. mission in Afghanistan said in a tweet that its acting head, Ramiz Alakbarov, met with Hanif on Monday and called for a reversal of the ban.

“Millions of Afghans need humanitarian assistance and removing barriers is vital,” the U.N. said, without providing more details about the meeting.

Since the ban was announced, four major international aid agencies stopped their operations in Afghanistan, saying they could not effectively reach people in desperate need without their female workforce.

The agencies — Save the Children, the International Rescue Committee, the Norwegian Refugee Council and CARE — have been providing healthcare, education, child protection and nutrition services and support amid plummeting humanitarian conditions.

The Taliban takeover in mid-August 2021 as U.S. and NATO forces were in the final weeks of their pullout after 20 years of war, sent Afghanistan’s economy into a tailspin and transformed the country, driving millions into poverty and hunger. Foreign aid stopped almost overnight.

Sanctions on the Taliban rulers, including a halt on bank transfers and the freezing of billions in Afghanistan’s foreign assets have already restricted access to global institutions. Funds from aid agencies helped prop up the country’s aid-dependent economy before the Taliban takeover.

Qatar, which played a key role in facilitating the negotiations that led to the withdrawal of U.S. forces from Afghanistan last year, expressed its concern Sunday about the NGO ban imposed “under the pretext” that some female employees did not adhere to the Islamic dress code set by the government for women.

The Organization of Islamic Cooperation said the fundamental rights of Afghan women had been dealt yet “another severe blow” following the order. Its secretary-general, Hissein Brahim Taha, said the move reflected a “willful policy … apparently seeking to further impact Afghan women’s rights.”

Security in Kabul was intensified in recent days, with an increased number of checkpoints, armored vehicles, Taliban special forces and armed officers on the streets.

The Taliban government’s Interior Ministry and the Kabul police chief were not immediately available for comment on the tighter security.