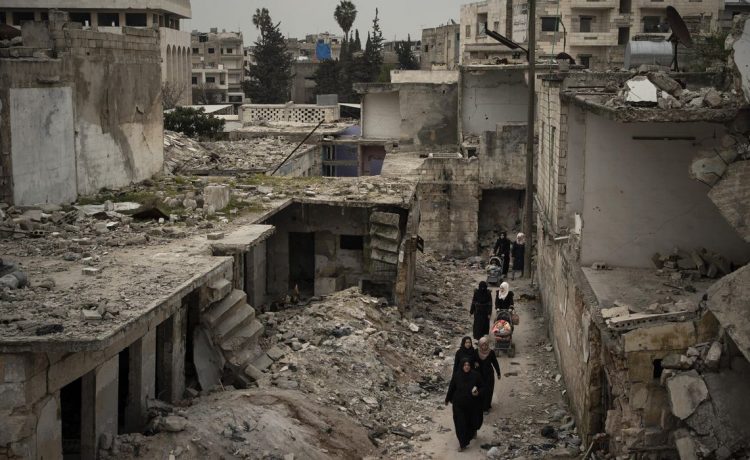 In October 2019, then-President Donald Trump ordered the withdrawal of U.S. forces from Syria.

Three years later, the war-torn nation has quietly become one of the U.S. military’s hottest and most dangerous war zones. There are fewer than 1,000 U.S. troops stationed in the country, but those men and women have come under repeated drone and rocket attacks from Iran-backed militias, prompting regular retaliatory strikes from American personnel.

What’s more, U.S. forces just last week carried out two major attacks on Islamic State leaders hiding in Syria, the latest in a string of missions to take out high-value terrorist targets who sought sanctuary in the country and view it as the globe’s most fertile recruiting ground for future jihadis.

Ensuring the lasting defeat of the Islamic State, or ISIS, remains the Pentagon’s stated goal for keeping troops in Syria, even though the once-mighty extremist group was declared “territorially defeated” more than three years ago. U.S. forces conduct their own counterterrorism raids and also partner closely with the Syrian Democratic Forces, a Kurdish-led military outfit that has spent years battling both ISIS and the government of Syrian dictator Bashar Assad.

The combination of high-stakes counterterrorism missions and ongoing clashes with Iran-backed groups have put U.S. forces in constant danger in Syria, with critics charging there’s little in the way of direct American interests there and even fewer legal justifications for a U.S. presence, with no end date or clear metrics for victory.

“There is no national security interest of America at all in Syria, period. There’s not,” said retired Army Lt. Col. Daniel Davis, now a senior fellow at the think tank Defense Priorities, which advocates for a more restrained U.S. military role abroad.

“There are plenty of people who call themselves ISIS who still reside in that area. That does not represent a threat to the United States,” Lt. Col. Davis said in an interview. “The operation does nothing to even minimize the local threat. It doesn’t even affect our national potential terrorist threat.”

The U.S. presence, he said, “is going to continue to drift along aimlessly for the foreseeable future until there’s a mass casualty event … and 20 guys get killed,” likely in an attack on U.S. bases by militias linked to Iran’s Islamic Revolutionary Guard Corps [IRGC].

While the U.S. has taken out numerous top ISIS officials in Syria over just the past several months, Lt. Col. Davis and other critics argue that the American footprint is so relatively small that it couldn’t effectively stop a major Islamic State resurgence.

But Pentagon officials say the U.S. presence is necessary for regional security and is highly effective at taking ISIS leaders off the battlefield.

Last week, U.S. troops carried out two high-stakes missions targeting ISIS fighters. The first, a helicopter raid outside the northeastern Syrian village of Qamishli, led to the death of Rakkan Wahid al-Shammri, whom the Pentagon said was a pivotal figure in the smuggling of weapons and fresh fighters to ISIS pockets in the area.

“This strike will degrade ISIS’ ability to destabilize the region and strike at our forces and partners,” Gen. Michael “Erik” Kurilla, the head of U.S. Central Command, said in a statement after the strike. “Our forces remain in the region to ensure the enduring defeat of ISIS.”

Last week’s strikes were just the latest U.S. operations in Syria. In July, for example, a U.S. drone strike killed Maher al-Agal, whom Pentagon officials said was the leader of ISIS in Syria. That strike was widely viewed as a major foreign policy victory for President Biden and an example of how the U.S. can still conduct successful counterterrorism operations in the theater, even after the end of formal combat operations in Iraq, the full U.S. withdrawal from Syria, and other drawdowns in the Middle East, Africa and elsewhere across the broader region.

Combating ISIS, however, is just one aspect of the complex conflict inside Syria, which has been gripped by civil war for more than a decade. Iran-backed militias — most notably the groups Kata’ib Hezbollah and Kata’ib Sayyid al-Shuhada, two Iraqi Shiite militias with direct ties to the IRGC — are active inside the country. In August, the groups carried out multiple attacks on U.S. military installations, including an Aug. 15  drone strike on America’s al-Tanf base.

No Americans were killed in the incident, but the Biden administration responded with major helicopter and gunship strikes on militia facilities in Syria. Even though the stated U.S. mission in Syria has nothing to do with Iran, American military officials have made clear they’re ready and willing to hit those groups when necessary.

“We will respond appropriately and proportionally to attacks on our service members,” Gen. Kurilla said in an August statement. “No group will strike at our troops with impunity. We will take all necessary measures to defend our people.”

The presence of ISIS fighters and Iran-linked extremist organizations is just one piece of the complex geopolitical puzzle inside Syria.

Russian troops are also inside the country to support Assad’s government in both its fight against rebel groups and allegedly to help stamp out the remnants of ISIS. American troops also have had close encounters with those Russian forces.

In August 2020, the Pentagon claimed that Russia sent vehicles into Syrian zones controlled by American forces. One of the Russian vehicles then collided with an American vehicle, as Russian helicopters flew low overhead.

The two countries traded blame in harshly worded statements, with neither admitting fault in the incident.

Until early last year, part of the American military mission in Syria also involved guarding valuable oil fields from Assad’s government troops and its allies, and from ISIS fighters. The Biden administration in early 2021 said that mission was no longer a priority in Syria.

Further complicating matters, Turkey considers elements within the SDF to be terrorists and has blasted the U.S. for its association with the group. Mr. Trump ordered the 2019 U.S. military drawdown in Syria amid a looming Turkish operation to eliminate alleged terrorists associated with the SDF, Mr. Trump’s second order to pull American forces from the country.

His first, in late 2018, led to the immediate resignation of then-Defense Secretary James Mattis.

The array of actors in Syria and the often-murky U.S. mission there has led legal scholars to call on the Biden administration to both clarify its long-term objectives and to find a new legal basis for keeping troops there.

“The Biden administration’s policy objectives in Syria are laudable. But it remains unclear whether any of them can be met through maintaining a U.S. military presence in the country, for how long doing so remains lawful (even if it was at the start), and whether viable alternative strategies exist to meet these goals,” said Tess Bridgeman and Brianna Rosen, co-editor and senior fellow, respectively, at Just Security, a national security and foreign policy forum at the New York University School of Law.

“Those are the next questions the Biden administration must urgently address,” they wrote in a recent analysis.