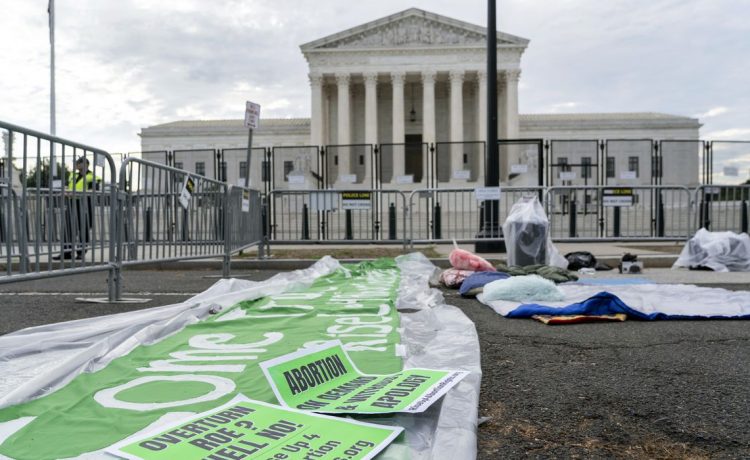 Lawmakers are sounding alarms about more violence at Republican Party offices and pro-life organizations across the country if the Supreme Court as expected overturns Roe v. Wade.

Attacks on offices tied to the Republican National Committee, GOP lawmakers, and pro-life groups have begun in anticipation of the ruling, including attacks this week in which vandals spraypainted slogans and smashed windows.

“We should be concerned,” said Rep. Thomas Massie, Kentucky Republican. “Democrats here need to come out and speak against the violence.”

The vandalism and violence began after a leaked opinion last month showed the Supreme Court was set to overturn the landmark 1973 case that legalized abortion nationwide.

On Monday, an RNC district office in Cedar Rapids, Iowa, was vandalized, while a pro-life pregnancy center in Detroit was attacked by vandals linked to the far-left group Jane’s Revenge.

The group is also linked to vandalism that took place in a local office for Rep. Tim Walberg, Michigan Republican.

The group has been advocating for a “night of rage” if the Supreme Court overturns Roe, calling for a night of rioting in Washington following the decision.

“In recent weeks, the radical left has unleashed an assassination attempt on Supreme Court Justice Brett Kavanaugh, the firebombing of pregnancy clinics, and targeted vandalism of Republican and pro-life groups. Joe Biden has yet to condemn any of this,” said Will O’Grady, RNC spokesman.

“We denounce violence in any form, whether it comes from whatever particular ideological perspective,” Mr. Jeffries said. “I haven’t seen any comments in terms of folks not ruling out violence. But we’ve been very clear: Violence is not a form of legitimate political discourse.”

Republicans said Democrats need to do more to dissuade left-wing organizations from engaging in political violence.

The fear of violence turning deadly escalated when Nicholas John Roske, a 26-year-old California man, was arrested with a gun and a knife outside the home of Mr. Kavanaugh, a conservative judge on the high court. Mr. Roske was charged with attempting to murder a federal judge, to which he pleaded not guilty.

Following the arrest, President Biden signed a bill that would extend security protections to family members of justices.

On Thursday, GOP Reps. Mike Johnson of Louisiana and Jim Jordan of Ohio sent a letter to Attorney General Merrick Garland urging the prosecution of individuals who have harassed Supreme Court justices.

“The Biden administration’s reluctance to condemn these radical efforts – court-packing proposals, threats to justices and their families, and unsupported recusal demands — has created an environment in which the far left now feels emboldened to harass justices at their private residences,” they wrote.

“It’s just shameful that the leadership in Congress and the White House have been silent at best, at worst, they seem to be throwing fuel at the fire and it’s a real problem,” Mr. Johnson said.