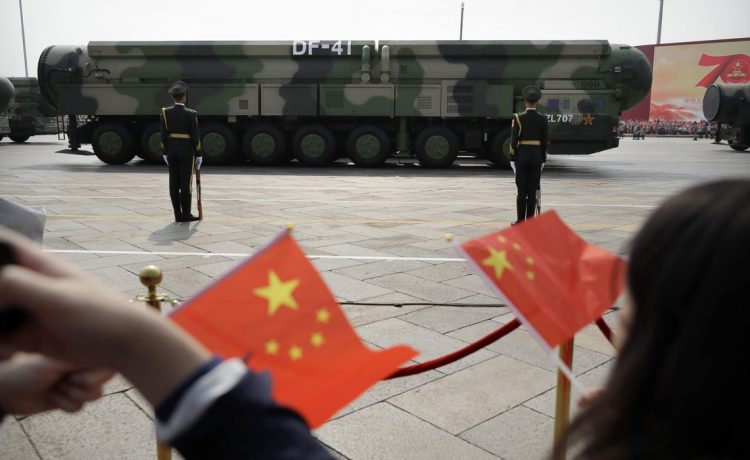 The growing ties between China and Russia are sparking new fears among U.S. war planners that the two nuclear powers will soon pose a unified nuclear threat to the United States, the Air Force general nominated to head the nation’s nuclear deterrence arsenal told Congress.

Gen. Anthony J. Cotton, currently commander of the Air Force Global Strike Command and nominee for Strategic Command commander, told a Senate confirmation hearing in response to repeated questioning that a China-Russia nuclear axis would require stronger U.S. nuclear deterrent forces and new thinking on how the U.S. would respond to a nuclear challenge from Beijing and Moscow.

The general’s comments were made the same day Chinese President Xi Jinping and Russian President Vladimir Putin were meeting in Uzbekistan for their first face-to-face talks since seven months. Both leaders called for increasing cooperation in the growing strategic partnership.

Mr. Xi said China supports working with Russia on their “core issues.” In February, the Chinese leader signed an agreement with Mr. Putin stating there are “no limits” to cooperation between the two.

U.S. intelligence has revealed that China is rapidly expanding its nuclear forces and is expected to have more than 1,000 warheads by the end of the decade, along with new missiles, submarines and bombers to deliver them. China recently tested a new space-based hypersonic strike weapon called a fractional orbital bombardment system that can deliver nuclear warheads to targets on earth from any trajectory.

“The current program of record is the absolute minimum U.S. Stratcom requires to provide effective strategic deterrence,” he said in written answers to committee questions. The command plans to maintain the aging force of missiles, bombers and submarines until replacements can be deployed. Funding delays in the modernization could undermine deterrence against China and Russia.

“Where possible, we must pursue every opportunity to accelerate modernization,” Gen. Cotton said.

Sen. Tim Kaine, Virginia Democrat, questioned the four-star general on the new deterrent posture that requires shifting from focus on a single adversary, Russia, to one that now must include Russia and China working together. He noted that for decades U.S. nuclear policy assumed China and Russia would never grow close based on a history of enmity and differing cultures.

“But they’re getting closer and closer every day, and often, they’re doing things not only just the two of them but with Iran, North Korea, sometimes with Turkey,” he said. “… Now we have two nuclear competitors, and evidence demonstrates that they are increasingly working together,” Mr. Kaine said.

Gen. Cotton said the command is currently conducting an assessment of the issue: “If confirmed, that assessment has to continue.”

Strategic Command also will seek to understand how to execute deterrence missions against a joint Chinese and Russian nuclear threat, he said.

“We’ll dive into where I can get a better understanding, to your point, of what does it look like when you have two near-peer adversaries that act differently, that might work together, [or] might not work together,” Gen. Cotton said.

Gen. Cotton told Sen. Josh Hawley, Missouri Republican, that the U.S. military needs to think very seriously about the force requirements for deterring China and Russia at the same time to at least 2030. Being able to deter both nations simultaneously is “going to be critical for us,” he said.

Part of that process will require the president and his administration to formulate national objectives to meet the dual threat.

Gen. Cotton said the speed of China’s buildup in particular, including the 360 new silos, “is absolutely incredible.”

“As recent as 2018, we were describing China as having minimal nuclear deterrence,” he said. “We would have probably had a conversation stating that it was about regional hegemony. Today, they’re building ground-based ICBM silos. They have the H-6N nuclear-capable medium bomber that has strategic-capable launch platform.”

Gen. Cotton also said U.S. nuclear deterrence is a backstop to conventional military forces that are working to deter China from attempting to take control of Taiwan following Russia’s bold aggression against Ukraine.

“Conventional and nuclear [deterrence] work hand in hand,” he said.

China understands that a credible U.S. nuclear deterrent will “make them think twice before engaging with us,” he added.

War planners have improved the integration of conventional and nuclear forces for deterrence by “leaps and bounds,” Gen. Cotton said.

During his testimony, Gen. Cotton diverged from the position of current Stratcom commander, Adm. Charles Richard, who opposed the Biden administration decision to cancel development of a sea-launched, nuclear-armed cruise missile. The Biden administration canceled the cruise missile over the objections of Adm. Richard and other senior military leaders, who argued the missile is needed to fill deterrence gaps against China.

Congress added up to $45 million in funds for the new cruise missile in the current defense authorization bill.

Gen. Cotton said he would like to review the cruise missile capability before offering his views on whether the program should resume or be killed off as the Biden administration sought to do.