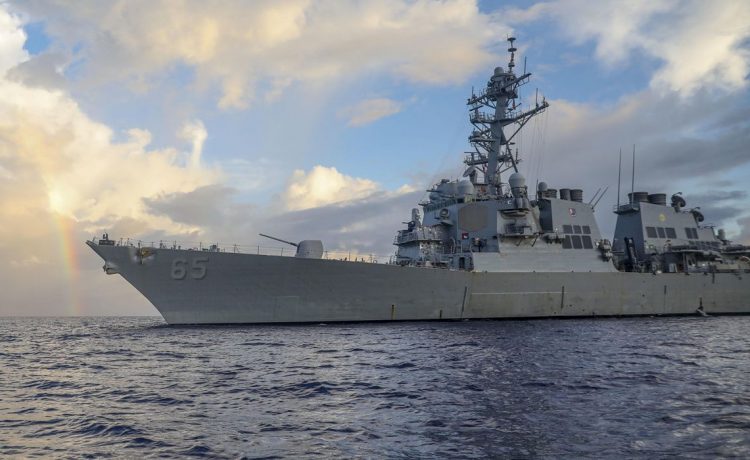 A Navy guided-missile destroyer conducted a second freedom of navigation operation in the South China Sea three days after sailing near disputed islands in the northern part of the sea, the Navy’s Seventh Fleet said.

The USS Benfold on Saturday sailed close to the disputed Spratly islands — which China claims as sovereign territory — in the southern part of the waterway where it continued operations, the fleet said in a statement.

“This freedom of navigation operation upheld the rights, freedoms, and lawful uses of the sea recognized in international law by challenging restrictions on innocent passage imposed by the People’s Republic of China (PRC), Vietnam and Taiwan,” the Navy said of the second operation. “Unlawful and sweeping maritime claims in the South China Sea pose a serious threat to the freedom of the seas, including the freedoms of navigation and overflight, free trade and unimpeded commerce, and freedom of economic opportunity for South China Sea littoral nations.”

On July 13, the Benfold passed near the Paracel Islands and China’s military said it had driven the warship out of the area, a charge denied by the Navy in a statement. China’s Maritime Safety Administration announced Friday it would be holding military exercises in a large area in the South China Sea from Sunday to Wednesday, although it was not clear if the exercises were related to the Benfold’s voyage.

The earlier passage by the Benfold coincided with the sixth anniversary of an international tribunal that rejected China’s claims to own most of the South China Sea. The strategic waterway is used for an estimated $3 trillion annually in international trade and large parts of it are contested by nations across East Asia.

China’s military has reclaimed what the Pentagon says is an estimated 3,200 acres of disputed islands in both the Paracels and Spratlys.

In 2018, the PLA began beefing up resources on the islands by deploying anti-ship and anti-aircraft missiles and electronic warfare gear, according to defense officials. U.S. officials say the works contradicted a 2015 pledge by President Xi Jinping that China had no plans to militarize the South China Sea islands.

“Facts have once again proved that the U.S. is nothing but a ‘security risk maker in the South China Sea’ and a ‘destroyer of regional peace and stability,’” the spokesman said.

The Navy statement said the Benfold operations near the Spratlys were designed to challenge excessive maritime claims under the 1982 Law of the Sea Convention that outlines rights and freedoms of use of the sea.

China, Vietnam, Taiwan, Malaysia, Brunei and Philippines all claim sovereignty over some or all of the Spratlys.

“In violation of international law, the PRC, Vietnam, and Taiwan purport to require either permission or advance notification before a military vessel engages in ‘innocent passage’ through the territorial sea of the relevant feature,” the U.S. statement said.

International law allows for ships of all countries, including warships, to pass through territorial seas.

Also, international law does not permit the unilateral imposition of authorization or advance notification for such warship innocent passage, the basis for the recent Benfold operations, the Navy said.

The Chinese jet conducted what defense officials called an “unsafe” and “unprofessional” encounter over the sea. The U.S. government protested the unsafe encounter to China, a defense source said.

Pentagon officials declined to comment on the incident, which was first reported by Politico.

Lt. Col. Marty Meiners said Defense Secretary Lloyd Austin noted during remarks at a conference in Singapore recently that the U.S. military has seen “an alarming increase in the number of unsafe aerial intercepts and confrontations at sea by PLA aircraft and vessels.”

During June, PLA jets had “conducted a series of dangerous intercepts of allied aircraft operating lawfully in the East China and the South China Seas. Now this should worry us all,” he said.