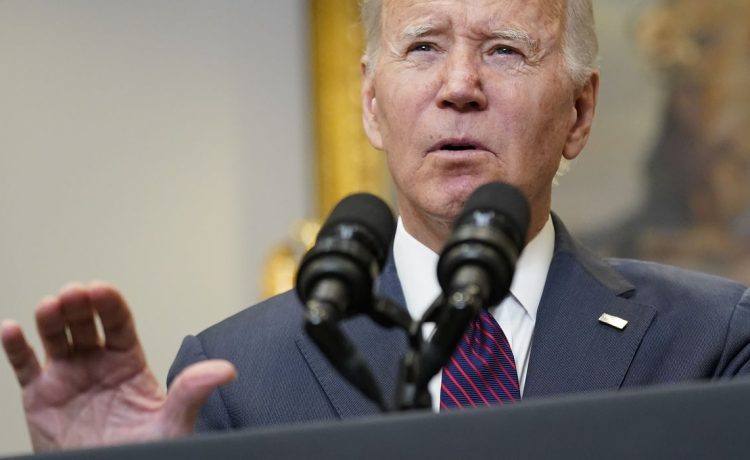 The Biden administration this week slapped sanctions on several Russian companies supplying parts for warships involved in the Kremlin’s war in Ukraine and separately on a number of Iranian officials tied to violence directed against protestors.

On Thursday, the State Department identified six businesses considered part of Russia’s defense industrial base, including Rigel Battery Co., based in St. Petersburg, Russia, which manufactures critical nickel-metal hydride and silver zinc batteries and has supplied lithium batteries to the Russian navy for more than 15 years.

“This action imposes severe costs on Russia’s defense establishment in response to (President Vladimir) Putin’s war of choice in Ukraine,” the State Department said Thursday in a statement.

The targeted Russian companies also include Avrora, which supplies and services automated control systems for submarines and naval ships, and Central Research Institute of Structural Materials, identified by the State Department as among the country’s leading companies involved in military shipbuilding and the development of military technology.

The Biden administration also sanctioned the P.P. Shirshov Institute of Oceanology of the Russian Academy of Sciences. In addition to its usual work considered legitimate, the institute develops robotic tools that perform search and reconnaissance missions for the Russian navy’s surface and submarine forces, the State Department said.

On Wednesday, the Treasury Department’s Office of Foreign Assets Control targeted Iran’s attorney general, known there as the prosecutor general, and several key military and paramilitary leaders, along with a company that provides riot control equipment to Tehran’s law enforcement forces.

Protests have erupted throughout Iran following the Sept. 16 death of 22-year-old Mahsa Amini at the hands of Iran’s morality police. The government has violently cracked down on the protestors since then. At least two protestors were executed, including one publicly, and several have been sentenced to death.

“We denounce the Iranian regime’s intensifying use of violence against its own people who are advocating for their human rights,” Brian E. Nelson, undersecretary of the treasury for terrorism and financial intelligence, said in a statement.

Mohammad Jafar Montazeri, Iran’s prosecutor general, is responsible for enforcing criminal judgments throughout the country. In late September, he issued a directive to courts to act “decisively” and hand down harsh sentences to many of those arrested during the protests, the Treasury Department said.

“The case of the first executed protestor, a young man named Mohsen Shekari, proceeded with little resemblance to a meaningful trial, according to multiple international sources,” the Treasury Department said.

The Biden administration accused Tehran of torturing Mr. Shekari and denying him access to a lawyer. He was executed less than three weeks after his conviction, U.S. officials said.

The Treasury Department sanctioned the Imen Sanat Zaman Fara manufacturing company, which supplies Iranian law enforcement forces with the armored cars that have been used to attack the protestors. An Iranian government official “explicitly lauded” the use of the company’s products while the protestors were being suppressed.

The list also includes Moslem Moein and Hossein Maroufi, leaders of Iran’s Basij Resistance Force, a paramilitary organization controlled by Iran’s Islamic Revolutionary Guard Corps that has played a role in the crackdown against protestors.

“The United States and our partners are dedicated to holding Iranian officials to account for egregious abuses committed against Iranian citizens fighting for their fundamental freedoms,” Mr. Nelson said.

As a result of the sanctions, all property of those identified by the U.S. government must be blocked and reported to the Treasury Department. Anyone engaging in transactions with the sanctioned individuals could face their own legal troubles, officials said.