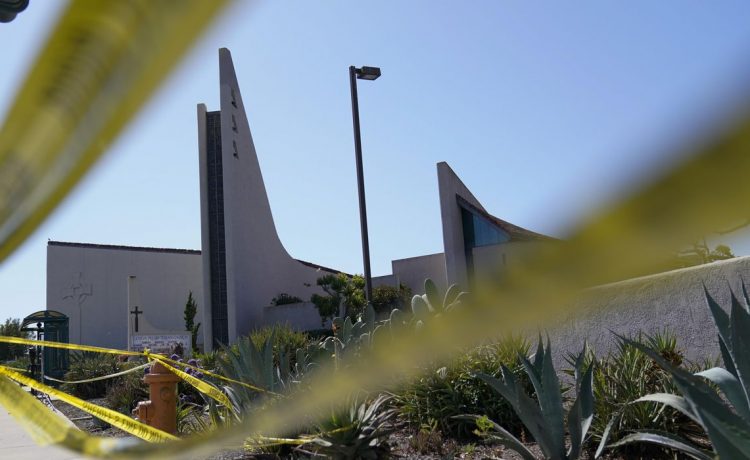 LOS ANGELES — The Rev. Steven Marsh never thought he would see the day his church in Laguna Woods, California – a town of 16,500 populated largely by retirees – would be spending $20,000 a month for security.

Then a gunman opened fire on May 15 during a luncheon at Geneva Presbyterian Church, where Marsh is senior pastor, killing one and injuring five other members of a Taiwanese congregation that met there. Officials said the man, who was motivated by political hatred against Taiwan, chained the church’s doors shut and hid firebombs inside before shooting at the gathering of elderly church members.

Houses of worship are meant to be places of shelter, reflection and peace, where strangers are welcome. But the recent string of high-profile mass shootings in the U.S. is a reminder violence can happen anywhere, prompting some faith leaders to ramp up security.

“We’re not trying to militarize the church,” Marsh said. “We prayed about it and made a decision to have armed security as an act of faith.”

Without the new security measures, Marsh predicted that a mass exodus by the congregation and the schools on the church’s campus would have followed the shooting.

SEE ALSO: Iran lashes out at Biden, accuses him of stoking tensions

Creating a space that is both safe and welcoming is possible, said Rabbi Charlie Cytron-Walker, the former spiritual leader of Congregation Beth Israel in Colleyville, Texas.

In January, he and three others were taken hostage by a pistol-wielding man during a Shabbat service. Cytron-Walker threw a chair at the gunman – a courageous act that helped them safely escape – after a nearly 11-hour standoff. He credits the several rounds of active shooter training he has taken.

“When you are unable to run away or find a hiding place, you need to find a way to act and to fight back,” Cytron-Walker said. “When we were most afraid he was going to kill us, I saw a moment I had been looking for all day long.”

Cytron-Walker now leads Temple Emanuel in Winston-Salem, North Carolina. As he works on a security plan with his new congregation, he is being mindful of how a welcoming synagogue can enhance safety “because someone who wants to do harm can see that they are not going to be able to walk in anonymous.”

Historically, sanctuaries have been vulnerable to violent attacks – from bombings at Black churches during the Civil Rights era to more recent shootings in the U.S. at mosques and Sikh gurdwaras. In the U.S., FBI hate crime statistics show that incidents in churches, synagogues, temples and mosques increased 34.8% between 2014 and 2018.

“All faiths are under attack in America by radicals and extremists,” said Alon Stivi, a security consultant for synagogues, Jewish community centers and day schools. Some congregants are reticent to show up.

“They’re asking a lot more questions: ‘Should I come to the weekly services or just come for the holidays? And if I come, should I bring my kids?’”

Religious leaders who once preferred to leave security in the hands of the divine are taking precautions that seemed unthinkable years prior, Stivi said. More congregants are carrying concealed handguns to services, too, he said.

From $25 million in 2016 to $180 million last year, the federal government has steadily increased the amount of funding it sets aside to help the faith community with security costs, Stivi said. But not all faith leaders are aware they can apply for it, he said.

Past attacks on houses of worship and other public spaces have prompted faith leaders to evaluate – sometimes for the first time – if there is more that can be done to keep their flocks safe.

“It is sad, but we are in such times where we must have armed security to protect our people,” he said.

The church is two blocks away from Emmanuel African Methodist Episcopal Church. In 2015, a self-proclaimed white supremacist opened fire during Bible study and killed nine worshippers, including the senior pastor. Middleton said the late pastor was like a brother to him.

In the wake of the massacre, security discussions at Mt. Zion factor worship style into the equation, including the need for some to always keep their eyes open, especially when most have theirs closed in prayer, Middleton said.

“No one ever thought mass shootings would happen in churches, which are sacred sanctuaries where you can escape the world and seek spiritual refuge,” he said. “When that space has been violated, it creates a restlessness of spirit.”

After the 2018 massacre at the Tree of Life synagogue in Pittsburgh, Rabbi Jon Leener met with local New York police to discuss safety for Base BKLYN, his home-based ministry that has welcomed thousands.

For years, he and his wife, Faith, would unlock their front door right before Shabbat dinners, believing in a Judaism where no door is shut or locked. That changed after Tree of Life – the deadliest antisemitic attack in U.S. history. Leener also installed a security camera and a buzz-in system for visitors. He hired an armed guard after this year’s hostage situation in Texas.

“It’s terribly unfortunate that we live in an age when we need to compromise our value of openness for the threat of violence, but that is just the reality at the moment,” Leener said.

It is a balancing act for many. Marsh said the shooting in his church happened because members of the Taiwanese congregation were welcoming to the shooter – a person they didn’t know.

“The church needs to be welcoming to all people, and we cannot lose that,” he said.

“Are there ways an active shooter could get on our campus again? Yes. But we have to be willing to have this happen again. Otherwise, we would all have to go through metal detectors. It would no longer be a church.”

Associated Press religion coverage receives support through the AP’s collaboration with The Conversation US, with funding from Lilly Endowment Inc. The AP is solely responsible for this content.