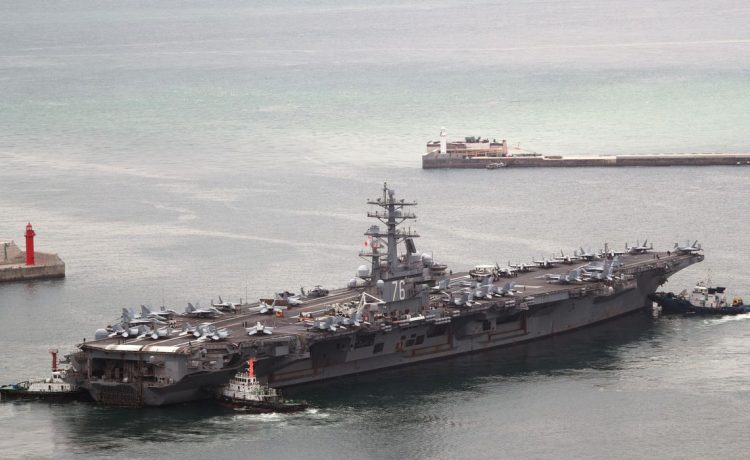 The USS Ronald Reagan and its carrier strike group launched drills with their South Korean counterparts on Monday, their first-such joint training in five years, only a day after North Korea test-fired a new missile in the area.

On Sunday, North Korea launched a short-range ballistic missile in what officials in South Korea believe was a response to the arrival of the Ronald Regan to the port of Busan. Pyongyang generally condemns South Korean military drills with allies as practice for an invasion and frequently brings out its own military hardware in response.

Officials with U.S. Indo-Pacific Command said they were aware of Pyongyang’s missile launch and were “consulting closely with our allies.” The North Korean missile flew about 370 miles before falling into the waters off the east coast of North Korea.

“While we have assessed that this event does not pose an immediate threat to U.S. personnel or territory, or to our allies, the missile launch highlights the destabilizing impact of [North Korea’s] unlawful [weapons of mass destruction] and ballistic missile programs,” a U.S. Indo-Pacific Command spokesman said in a statement.

According to reports, North Korea is believed to have launched about 20 missiles in 2022 as it rejects calls from the U.S. and its allies to resume nuclear diplomacy. Officials in Pyongyang said they wouldn’t return to the diplomatic table until the Biden administration lifts economic sanctions and ends joint military drills with South Korea.

Fears have been rising in recent months that the North was preparing another nuclear missile test, one that could set tensions soaring once again in East Asia.

More than 20 U.S. and South Korean navy ships, including the nuclear-powered, Japan-based Ronald Reagan, are expected to take part in the four-day series of naval exercises. This year’s drills are the first involving a U.S. aircraft carrier since 2017. The exercises have been put on hold in recent years over the COVID-19 pandemic and the Trump administration’s ultimately unsuccessful diplomatic outreach to North Korean leader Kim Jong-un.