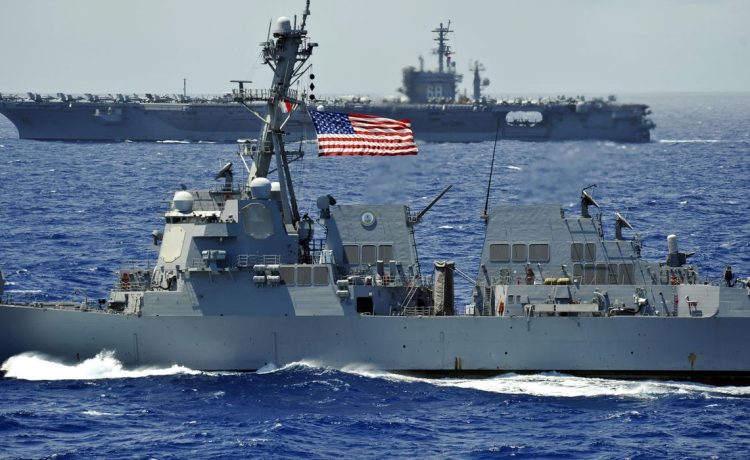 A U.S. Navy warship sailed through the Taiwan Strait on Thursday in what Pentagon officials said was a demonstration of the U.S. commitment to keep the waterway that separates Taiwan from mainland China open to international traffic.

The guided-missile destroyer USS Chung Hoon made the passage from the South China Sea north through the 100-mile strait and into the East China Sea, said Navy Lt. Kristina Wiedemann, spokeswoman for the Seventh Fleet.

The “freedom of navigation operation” was the Navy’s first through the strait since tensions soared over Christmas weekend when some  71 People’s Liberation Army (PLA) aircraft and seven Chinese navy warships conducted operations around Taiwan, the island democracy Beijing has vowed one day to reclaim.

China has been sending up to 10 aircraft into Taiwan’s air defense zone almost daily. The recent escalation was seen as an expression of Beijing’s anger at recent legislation signed by President Biden strengthening U.S.-Taiwan defense ties.

The Chung Hoon passage also was carried out following a dangerous PLA air force intercept of a U.S. RC-135 reconnaissance aircraft patrolling over the South China Sea on Dec. 21.

The latest destroyer transit was routine and carried out “through waters where high-seas freedoms of navigation and overflight apply in accordance with international law,” Lt. Wiedemann said in a statement.

Asked if the destroyer was challenged by Chinese navy ships or aircraft, the spokeswoman indicated there were exchanges but provided no details.

“All interactions with foreign military forces during the transit were consistent with international norms and did not impact the operation,” she said. “U.S. Navy vessels routinely interact with foreign warships and aircraft while operating throughout the region.”

China in the past has hailed U.S. warships and aircraft in areas that it claims are its territory and demanded they depart the area.

In addition to its stepped-up aerial and naval operations near Taiwan in recent months, China escalated the standoff in June by declaring the Taiwan Strait to be part of its sovereign territory. The Chinese Foreign Ministry announced June 13 that China “has sovereignty, sovereign rights and jurisdiction over the Taiwan Strait” and denied other nations declaring the waterway as international waters.

Critics said the Chinese declaration on the Taiwan Strait violated long-standing diplomatic understandings with the U.S. designed to preserve a fragile status quo that has kept peace across the strait for decades. Lt. Wiedemann sought to play down the latest transit and the destroyer’s interaction with the PLA.

“U.S. Navy ships use the Taiwan Strait to transit between the [South China and East China Seas] and have done so for many years,” she said.

A Chinese Embassy spokesman did not immediately respond to a request for comment.

The passage comes even as the Biden administration is easing recent bilateral tensions with China over fears that sour relations will lead to war.

The last warship to transit the Taiwan Strait on Nov. 5 was the guided-missile destroyer USS Benfold. That passage was kept secret and not disclosed until after President Biden met with Chinese President Xi Jinping in Bali on Nov. 20 on the sidelines of the G-20 summit. The meeting set the stage for a new Biden policy of conciliation toward China.

Taiwan remains a major espionage target for Chinese intelligence services, U.S. officials have said. In June a retired Taiwanese general and colonel were indicted for spying for China.

The arrests appear to be part of a stepped-up counterintelligence push by Taiwan against Chinese espionage.