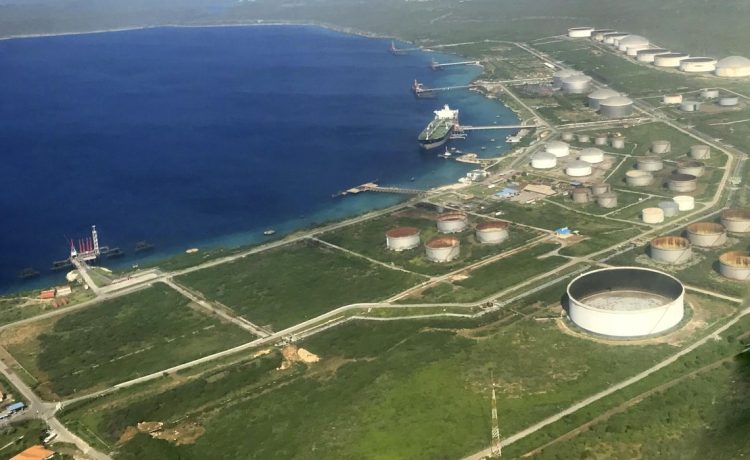 MIAMI (AP) — A company with an office in Houston and another owned by two American citizens appear to be helping Venezuela bypass U.S. sanctions and quietly transport millions in petroleum products aboard an Iranian-built tanker, The Associated Press has learned.

The sanctions evasion effort is centered around an idled refinery and adjacent oil terminal on the Dutch Caribbean island of Curacao that until 2019 was a major shipping hub for Venezuela’s state-owned oil company, PDVSA.

On Sept. 28, the Togo-flagged tanker Colon discharged 600,000 barrels of fuel oil at the Bullenbaai terminal, which is operated by Curacao’s state-owned refining company in partnership with a fledgling company, Caribbean Petroleum Refinery, owned by two Venezuelan American dual nationals.

The state-owned company issued a news release celebrating the Colon’s arrival as a “historic moment” – saying it was the first delivery for the reactivated terminal, which is capable of storing up to 7 million barrels of oil products.

Although the release made no mention of the fuel oil’s origin, the Iranian-built tanker for the past year has shuttled exclusively among ports in Venezuela. Ship tracking data show that two days prior to its arrival in Curacao, the Colon loaded its giant black-and-red hull at the port of Amuay, home to Venezuela’s largest refinery.

The little-noticed oil shipment would appear to violate the spirit – if not strictly the law – of U.S. sanctions on Venezuela that have been aimed unsuccessfully since 2019 at forcing President Nicolás Maduro from power.

With Maduro’s socialist government shunned as a financial pariah in the west, PDVSA has had to resort to ever-more complex transactions to move oil produced from the OPEC nation’s massive petroleum reserves – the world’s largest.

But until now, many of those transactions involved deeply discounted payments in cryptocurrencies by Russian oligarchs, shell companies in such places as Hong Kong and “ghost tankers” that turn off their mandatory transponders to avoid detection by U.S. authorities.

In contrast, Curacao, whose foreign relations are handled by the Netherlands, a staunch U.S. ally, has strictly adhered to U.S. sanctions, once even confiscating PDVSA’s unsold inventories after its lease of the refinery expired in 2019 to pay American oil companies stiffed by Venezuela over the years.

Authorities in Curacao may be betting on lax enforcement by the Biden administration, said Marshall Billingslea, a former senior Treasury Department official who helped craft the current sanctions policy. During former President Donald Trump’s administration, the U.S. froze the assets of more than 140 Maduro insiders and threatened retaliation against even non-American companies caught dealing in Venezuela’s crude.

In contrast, President Joe Biden hasn’t imposed any additional sanctions on Venezuela since taking office and has promised to roll back existing restrictions if Maduro takes meaningful steps toward holding free and fair elections.

“They’re flouting the sanctions because they know under this administration there are no consequences,” said Billingslea.

Under U.S. sanctions, Americans and U.S. entities are barred from doing business with Venezuela’s state-owned oil company. That ban becomes harder to enforce, however, the more times an oil cargo changes hands and is blended with other shipments, obscuring PDVSA’s role as the ultimate beneficiary of any international sale.

Internal PDVSA documents show that the cargo transported by the Colon was sold in September by PDVSA to United Petroleo Corp. Little is known about United, which was registered in Panama last year. But it has emerged as PDVSA’s second biggest client this year, with unpaid invoices for oil products sold on consignment of over $400 million, according to the documents, which someone knowledgeable about the transaction shared with the AP on the condition that the person remain anonymous.

The Colon’s cargo was discharged in a storage facility owned by Curacao’s state-owned refinery in partnership with Caribbean Petroleum Refinery.

Caribbean Petroleum Refinery was registered in Curacao only in June and lists among its directors a Venezuelan American businessman, Raul Herrera. A related holding company bearing a similar name lists as its director Luis Giusti, another dual national who was CEO of PDVSA when Maduro’s predecessor, Hugo Chavez, was elected in 1998.

When asked whether the shipment originated in Venezuela, Patrick Newton, director of Curacao’s state-owned refinery, said his company is in full compliance with U.S. sanctions and its contracts require that its clients adhere to the same laws.

Meanwhile Herrera said his company’s involvement in the transaction was limited to providing storage to the cargo’s owner, which he identified as Knob Trading SA, a Panama-registered company that lists an office in Houston on its website.

“We are not operating Venezuelan products,” said Herrera, who is also the president of a South Florida loan consulting firm. “We are not the owners or sellers of this cargo.”

It’s unknown where the crude went after it arrived in Curacao.

However, a month later, traders gingerly tried to offload the cargo, marketing it for re-export as 1 million barrels of “Bullenbaai Fuel Oil” – possibly a blend of different grades since Curacao doesn’t produce oil. That’s according to an Oct. 29 certificate of origin purportedly issued by Caribbean Petroleum Refinery. A copy of the certificate was provided to the AP by an oil trader who had been offered the cargo by a broker working with Knob. He spoke on condition of anonymity for fear of being identified with a transaction in violation of U.S. sanctions.

The certificate was purportedly prepared by Frank Verhoets, who is identified as managing director of Caribbean Petroleum Refinery. However, Herrera said nobody by that name works at the company and called the document, in which Knob’s name is scratched off, a clear fraud.

“Unfortunately in the industry, there’s a lot of falsifications and misleading information,” he said.