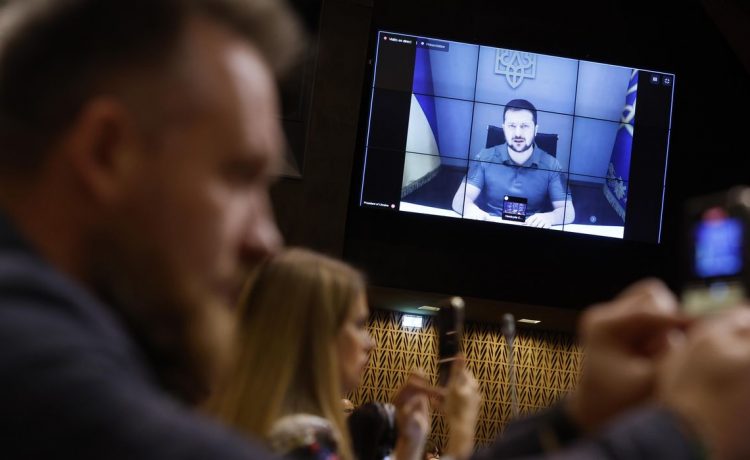 President Volodomyr Zelenskyy has pushed for Ukraine to be fast-tracked into NATO, saying his country upholds the democratic values of the Western military alliance and has shown its effectiveness on the battlefield. But, a senior Russian official on Thursday said such a move would all but guarantee sparking a much wider conflict in Europe.

Alexander Venediktov, deputy secretary of the Russian Security Council, warned any attempt to add Ukraine to NATO could spark a much larger conflict.

“Kyiv is well aware that such a step would mean a guaranteed escalation to World War III. Apparently, that’s what they are counting on — to create informational noise and draw attention to themselves once again,” Mr. Venediktov said in an interview with TASS, the official Russian news agency.

He said most NATO members understood the “suicidal nature” of admitting Ukraine to the alliance.

“In any case, Russia’s position remains unchanged: Ukraine’s accession to NATO or some other alliance formed under the auspices of the United States is unacceptable to us,” Mr. Venediktov said.

The Russian threats come amid promises by NATO members to boost support Ukraine while strengthening the deterrence and defense capabilities of the alliance. Secretary General Jens Stoltenberg said that nuclear rhetoric coming from Russian officials such as Mr. Venediktov and President Vladimir Putin was “dangerous and irresponsible” and that any use of nuclear weapons by the Kremlin would have “severe consequences.”

“We will not be dragged into Russia’s war of choice but we will stand by Ukraine as it fights to defend itself,” Defense Secretary Lloyd Austin said Thursday as he finished up two days of talks with European and NATO allies. “NATO poses no threat to Russia and seeks no confrontation with Russia. But, our defensive alliance will, as it always has, protect every inch of NATO territory.”

“Putin thought he could easily conquer his peaceful neighbor. Yet, the Kremlin’s war of choice is now in its eighth month,” Mr. Austin told reporters on Thursday following a NATO ministerial meeting. “Putin’s mobilization effort, his bellicose rhetoric, his cruel attacks on civilian targets, and his hollow attempts to annex Ukrainian territory, all show how Ukraine’s courage and skill have disrupted Russia’s hope for a quick war of conquest.”

Washington has already sent Ukraine some $16.8 billion in weapons and other assistance since the invasion in late February. The military hardware has included 20 advanced High Mobility Artillery Rocket Systems (HIMARS) – with the promise of almost 20 more in the future – and more than 140 155mm howitzers, along with numerous other items.

Russian forces have blitzed Ukraine with missiles and kamikaze drones in recent days, a furious reaction to the bombing of a key bridge linking Russia with annexed Crimea. NATO officials said Thursday they were prepared to supply Kyiv with advanced air defense systems.

“We need to protect our sky from the terror of Russia. If this is done, it will be a fundamental step to end the entire war in the near future,” Mr. Zelenskyy told the Parliamentary Assembly of the Council of Europe in a video plea.

Mr. Austin said NATO is providing air defense systems to Ukraine to meet their immediate needs along with procuring other systems that could take weeks, months or years to produce.

President Emmanuel Macron said France will supply air-defense systems to Ukraine following the recent devastating strikes believed to have targeted civilians in cities across the country, and NATO said it will soon provide Kyiv with hundreds of drone jammers for use against Russian and Iranian unmanned aircraft.

The Pentagon said it intends to deliver the first two advanced NASAMS surface-to-air missiles systems to Ukraine in the coming weeks that will provide medium- and long-range defenses against Russian missile attacks.