Ukraine takes the fight to the enemy with offensive in south 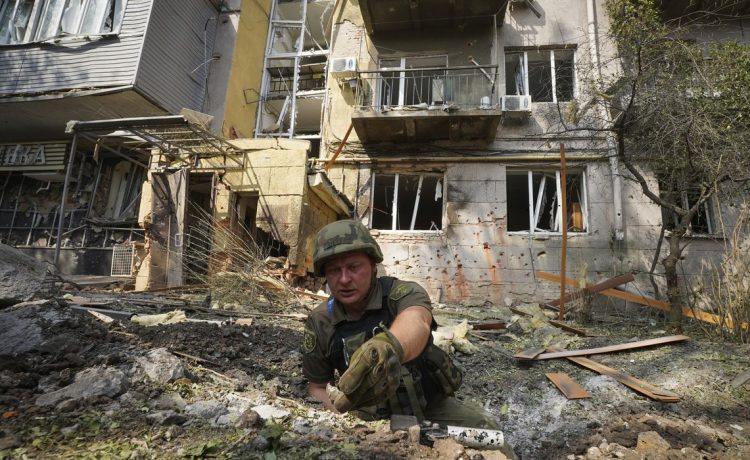 Ukraine’s military may not have turned the tide in its six-month war to repel a massive Russian invasion force.

But it may have at least have turned a corner on the battlefield.

After months of playing defense, fighting off attacks on its major cities and ceding ground in the south and east to Russia, Ukrainian officials say they are finally taking the fight to the enemy, having launched assaults in recent days along the front lines in the occupied Kherson region in what analysts say may be the beginning of a counteroffensive in southern Ukraine.

“It is not yet possible to confirm the extent of the Ukrainian advances,” British military intelligence officials said. “However, since the start of August, Russia has made significant efforts to reinforce its force on the western bank of the Dnipro River around Kherson.”

The Washington-based Institute of the Study of War, in its daily summary of the fighting, noted that even some Russian military blogs are discussing Ukrainian advances along the southern end of the crescent of territory now in Moscow’s control, although a clear picture of the state of fighting on the ground remains impossible to confirm.

“Ukrainian officials did not confirm liberating any settlements, but some Russian milbloggers and unnamed sources speaking with Western outlets stated that Ukrainian forces liberated several settlements west and northwest of Kherson City, near the Ukrainian bridgehead over the Inhulets River, and south of the Kherson-Dnipropetrovsk Oblast border,” the think tank wrote.

Russia implicitly acknowledged the Ukrainian advances in its official press, but said the attackers have been turned back with heavy losses. According to the state-owned TASS news agency, Ukraine lost more than 1,200 soldiers along with almost 100 tanks and infantry fighting vehicles on the first day of the offensive — figures that could not be independently verified.

On Monday, a senior military official in the Pentagon confirmed an increase in artillery fire coming from Ukraine.

John Hardie, a senior research analyst at the Foundation for Defense of Democracies think tank, said it certainly appears Ukraine has taken the offensive in an area west of the Dnipro River. Previously, Ukrainian forces had been stubbornly ceding small amounts of territory across the disputed Donbas region, and Russia was playing up moves to annex parts of its neighbor through local referendums in captured territory.

“What exactly is happening isn’t clear. Kyiv is playing its card very close to its chest and there are a lot of unverified claims flying about,” Mr. Hardie told The Washington Times. He was “reasonably confident” to say Ukraine may have regained ground that had been lost to Russia following its invasion more than six months ago.

“Ukraine is probably attacking in other directions as well, but it’s difficult to say precisely where and with what,” Mr. Hardie said.

While recognizing the psychological impact of an counter-offensive, even Ukrainian officials in Kyiv are cautious about getting the hopes up for a population badly disrupted by six months of brutal warfare.

Oleksiy Arestovych, a senior government advisor in Kyiv, said on the messaging service Telegram that Ukrainian troops had pierced Russian defenses in several areas along the front around Kherson,but cautioned against a quick victory.

The attack was a “slow operation to grind the enemy,” he said, adding, “Of course, many would like a large-scale offensive with news about the capture by our military of a settlement in an hour, but we don’t fight like that. … Funds are limited.”

Kherson was the first major Ukrainian city to fall in the opening days of the war after Russian troops advanced into the city from the Crimean Peninsula during the earliest days of the war.

In his address to the nation on Monday, Ukrainian President Volodymyr Zelenskyy warned Russian soldiers to leave his country and return to Moscow, hinting broadly that Ukraine’s forces were counterattacking.

“If they want to survive, it is time for the Russian military to flee. Go home,” President Zelenskyy said. “If they do not listen to me, they will deal with our defenders, who will not stop until they liberate everything that belongs to Ukraine.”

Ukraine is playing its cards very close to its chest and there are a number of unverified claims about the invasion flying about, analysts said.

“Anyone wants to know what our plans are? You won’t hear specifics from any truly responsible person, because this is war,” Mr. Zelenskyy said in his Monday address. “But the occupiers should know: We will oust them to the border.”

A senior military official in the Pentagon confirmed that Ukraine has recently been ramping up the number and severity of attacks it has launched against Russia.

“They have been making up some small advances in and around the Kherson pocket for a while,” the Pentagon official told reporters. “I don’t want to mislead you here and tell you that I don’t think the offensive is underway.”

British intelligence officials said Russian military leaders have combined forces from two field armies — the 49th Combined Army and the 35th Combined Army — to help commanders prepare for Ukraine’s expected counteroffensive. Timing is also of the essence: the coming winter is likely to make large operations much more difficult and Mr. Putin just recently announced a major call-up of new draftees in 2023 to fill the depleted Russian ranks along the front lines.

“Most of the [Russian] units around Kherson are likely undermanned and are reliant upon fragile supply lines by ferry and pontoon bridges across the Dnipro,” British officials said in a Twitter post. “If Ukraine succeeds in undertaking sustained offensive operations, the cohesion of this untested structure will likely be a key factor in the sustainability of Russian defenses in the south.”

Ukraine’s counteroffensive began even as technical experts with the International Atomic Emergency Agency (IAEA), the UN’s nuclear watchdog group, prepared for their trip to Ukraine to check on the status of the Zaporizhzhia Nuclear Power Plant, the largest atomic facility in Europe.

IAEA Director General Rafael Grossi said shelling struck critical offices located only about 100 yards from the reactor building. Their planned mission is intended to assess the physical damage to the facilities along and determine whether safety and security concerns were addressed.

President Zelenskyy said Ukraine will even find a place for Russian soldiers who don’t want to go back home. “Let such occupiers surrender and we will guarantee them compliance with all norms of the Geneva Conventions,” he said.