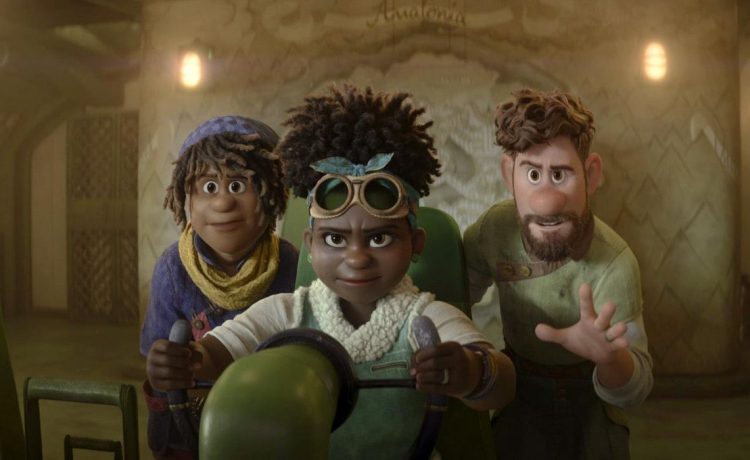 The disastrous opening weekend for Disney’s boundary-pushing “Strange World” reanimated predictions of dire financial consequences over the studio’s embrace of a progressive agenda in children’s entertainment.

“Strange World,” which features a gay teen romance involving the main character, an environmental message and no princesses, came in well below projections, grossing $11.9 million over the three-day weekend and $18.6 million over the five-day Thanksgiving holiday.

Given the film’s reported $180 million budget, the Hollywood press ripped “Strange World” as not just a dud but a “historic bomb,” as The Wrap put it. Variety projected that the flick could lose as much as $100 million.

The reaction from the right was similarly scathing. “Get woke and go broke! Shame on @Disney for producing this garbage in the first place!” tweeted former Republican House candidate Mario Fratto.

Said Canadian podcaster Jordan B. Peterson: “Thank the stars above for the free market.”

Ryan Bomberger, founder of the pro-life Radiance Foundation, tweeted: “What a #StrangeWorld where Disney offers families a crap film at the box office. They combine a terrible woke storyline w/ teenage boys who sexually pant for each other. No thanks @Disney.”

The film’s poor reception contributed to the perception of wokeness-run-amok at Disney, which was criticized for the lesbian kiss scene in “Lightyear,” a $200 million animated feature released in June that has so far grossed $115 million domestically, according to BombReport.

Defending “Strange World” were LGBTQ advocates who blamed the film’s poor showing on Disney’s lackluster marketing campaign. Others argued that many Disney fans are likely waiting for the movie to appear on the Disney+ streaming service.

“I’ve been to the movie theater over 100 times this year and I didn’t see a single trailer for Strange World,” tweeted adult cartoonist Adam Ellis. “They do it on purpose. They intentionally bury it so they can say ‘See? Nobody wants to see movies like this.’ Maybe they would if the studio promoted it.”

Conservative film critic Christian Toto, who runs the Hollywood in Toto website, said the movie tanked for a variety of reasons.

“I think you can point to several factors for ‘Strange World’s’ disastrous opening. Let’s start with the title, which is utterly bland. It’s an original story, something that often doesn’t click with audiences weaned on sequels, prequels and reboots,” said Mr. Toto in an email.

“The film’s gay storyline got plenty of online attention, and some parents are exhausted by the messaging in modern Disney fare. It’s always hard to pinpoint how much of a factor this proves to be, but it clearly didn’t help at the box office,” he said.

Then there’s the quality of the film itself. Audiences on Rotten Tomatoes gave the film a 64% approval rating, below the 74% from reviewers. CinemaScore gave the picture a “B,” a low mark for a major Disney release.

Disney’s #StrangeWorld bombs at the box office with $18.6M domestically in its first 5 days

The film is projected to lose at least $100M pic.twitter.com/S3LPC4Npy1

The movie centers on a family of explorers embarking on a journey to save their planet from a mysterious environmental crisis, but “tries too hard to earn the diversity merit badge,” as the MovieWeb review says.

“For example, the protagonist family consists of a biracial marriage, a gay son, and a three-legged dog,” said Brett McCracken in the Gospel Coalition review. “Many other characters represent what appear to be nonbinary or nonconforming identities. There are lots of masculine women and feminine men, resulting in what amounts to an ironically not-diverse film in the area of gender.”

Disney opted to skip 20 international markets, including those in China and the Middle East, rather than edit out the LGBTQ content, according to CartoonBrew.

Other reviewers praised the film as “a visually imaginative treat” and “the majestic work of the animation team.”

“Strange World” may yet find its audience. The movie had the weakest opening weekend for a major Disney animated movie since “The Emperor’s New Groove” in 2000, but that film managed to turn it around with strong DVD sales, ultimately becoming profitable and spawning a 2005 sequel.

“Disney’s ‘Strange World’ cartoon, which features a gay teen in love with another boy, FLOPPED with a disastrous $18M opening on a $180M budget,” tweeted Mr. Smith, who is gay. “Most adults have NO PROBLEM with gays. They obviously DO have a problem with LGBT propaganda in kids’ flicks.”