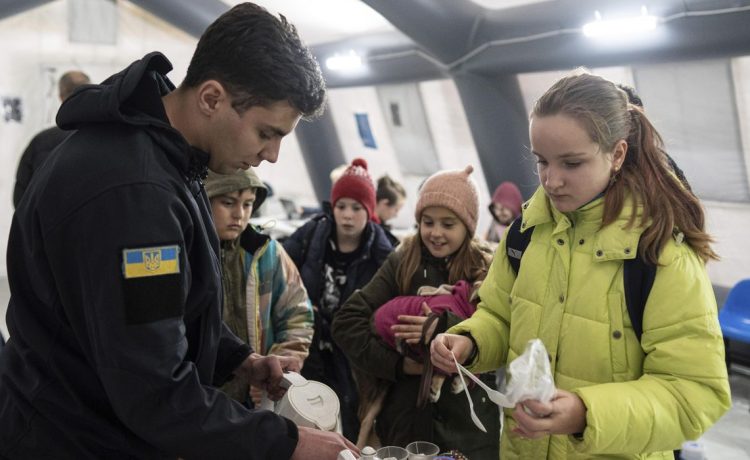 KYIV, Ukraine (AP) — An uneasy calm hung over Kyiv on Tuesday as residents of the Ukrainian capital did what they could to prepare for anticipated Russian missile attacks aiming to take out more energy infrastructure as winter sets in.

To ease that pain, NATO allies were making plans to boost provisions of anything from blankets to generators to ensure the 43 million Ukrainians can maintain their resolve in the 10th month of fighting against Russia’s invasion.

“Ukrainians are very tired of this war, but we have no choice in the matter,” said Olena Zelenska, the wife of President Volodymyr Zelenskyy, in a BBC interview during a visit to Britain.

“We do hope that the approaching season of Christmas doesn’t make you forget about our tragedy and get used to our suffering,” she said.

Ukraine’s grid has been battered countrywide since early October by targeted Russian strikes, in what Western officials call a Russian campaign to weaponize the coming winter cold.

Ukrainians are putting up defenses – both for troops and for civilians. The government has rolled out hundreds of help stations, christened Points of Invincibility, where residents facing outages of power, heating and water can warm up, charge their phones, enjoy snacks and hot drinks, and even be entertained.

“I had no electricity for two days. Now there’s only some electricity, and no gas,” said Vanda Bronyslavavina, who took a breather inside one such help center in Kyiv’s Obolon neighborhood.

The 71-year-old lamented the uncertainty about whether Russia will simply resume its strikes after infrastructure gets fixed, in a frustrating cycle of destruction and repair.

It underscored how the war continues to cast a pall over every aspect of life, even if civilian casualties are relatively low at the moment.

Tymoshenko said that as of Tuesday, power had been restored to 24% of residents in the hard-hit southern city of Kherson.

On the battlefields in the eastern Luhansk region, the regional governor said Ukrainian forces were continuing a slow advance, pushing toward Russian defense lines set up between two key cities. Serhiy Haidai acknowledged in televised remarks, though, that the onset of winter was compounding a “difficult” battlefield situation.

The prospect of any peace remained remote. The Kremlin reaffirmed Tuesday that negotiations could only be possible if Ukraine meets Russian demands. Kremlin spokesman Dmitry Peskov told reporters that “it’s impossible to hold any talks now because the Ukrainian side strongly rejects them.”

He noted that “political will and readiness to discuss the Russian demands” are needed to conduct negotiations.

Russia has demanded that Ukraine recognize Crimea as part of Russia and acknowledge other Russian gains. It also has repeated its earlier demands for “demilitarization” and “denazification,” albeit with less vigor than in the past.

Jill Lawless in London contributed to this report.