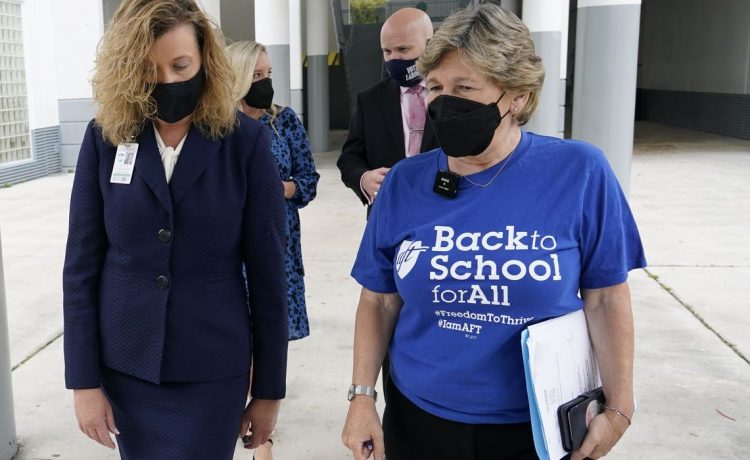 Ms. Weingarten, who spoke at a virtual town hall with Education Secretary Miguel Cardona, said laws targeting teachers’ curricula have contributed to burnout and pushed them into advocating against regulations on classroom material.

“Very few teachers thought that they were going into teaching to be social justice warriors,” Ms. Weingarten, president of the American Federation of Teachers.

Ms. Weingarten asserted that teachers can no longer teach certain topics or books in some states.

“That has been what has created some of the burnout. And that’s not parents. That’s politicians. Parents just want what’s best for their kids. And so do the teachers,” she said.

The United States is currently facing a national teacher shortage with a gap of needing more than 300,000 educators.

Ms. Weingarten said healthy morale was needed to build up the shortage, which includes signaling public respect for the profession after the coronavirus pandemic.

“It has not been easy, not just the last two years, but the inequity, the injustice, the lack of opportunity, the lack of a level playing field. And teachers are essentially the first responders to all this, and what they ask for is they ask for respect,” Ms. Weingarten said.

Critical race theory became a flashpoint last year during a rush of appearances by parents at school boards railing against the teachings.

Other states have also moved forward on a conservative campaign to eradicate certain topics from classrooms.

Texas and Florida have also curbed the teaching of critical race theory in classrooms.

Florida also made national headlines earlier this year after Gov. Ron DeSantis passed a bill that would restrict teachings of LGBT topics to children in kindergarten to 3rd grade.

Supporters of the bill, called “Parental Rights in Education,” said it would allow parents to make the decision on when and if they want to introduce topics of sexuality to their children. Opponents, who dubbed it the “Don’t Say Gay” bill said it would harm LGBT youth.