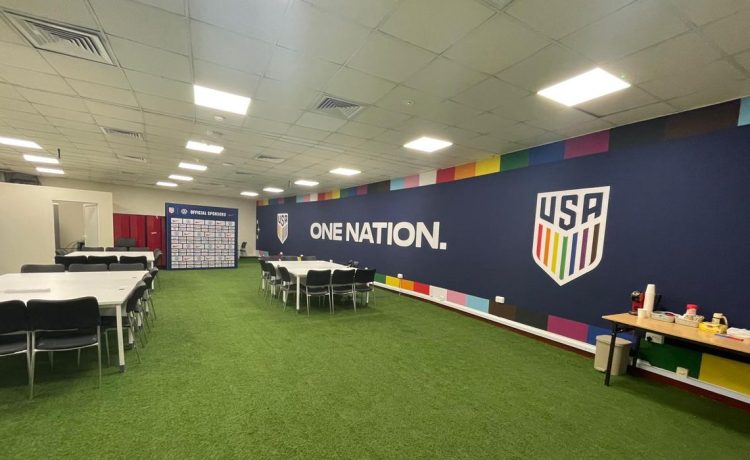 The U.S. men’s soccer team’s facilities will be sporting a rainbow-colored Team USA crest alongside the traditional red, white and blue version throughout the upcoming World Cup in Qatar to show support for the LGBTQ community.

The crest will not be featured on the players’ uniforms during World Cup matches, a U.S. Men’s National Team spokesman confirmed to The Washington Times.

Instead, the crest will be featured at the national team’s hotel, media areas and parties throughout the duration of the global soccer tournament.

“Our rainbow badge has an important and consistent role in the identity of U.S. Soccer,” spokesman Neil Buethe said in a statement to The Times. “As part of our approach for any match or event, we include rainbow branding to support and embrace the LGBTQ community, as well as to promote a spirit of inclusiveness and welcoming to all fans across the globe.”

U.S. Soccer said the rainbow crest is part of the team’s Be the Change initiative, a player-started effort that came about after George Floyd’s 2020 death in police custody. The national team said the initiative isn’t done as an act of defiance, but to express the players’ desire to have a positive impact.

The move comes as the World Cup is set to kick off Friday in Qatar where homosexuality is illegal and punishable by death.

Western leaders have urged fans to be respectful of the host nation’s traditionalist Islamist views.

For instance, U.K. Foreign Secretary James Cleverly said late last month that LGBTQ fans should show “a little bit of flex and compromise” when it comes to expressing themselves in Qatar, according to BBC.

However, fans have been more vocal about their distaste for the games being held in Qatar.

Qatar is the first Middle Eastern country to ever host the international soccer tournament, which begins Sunday.