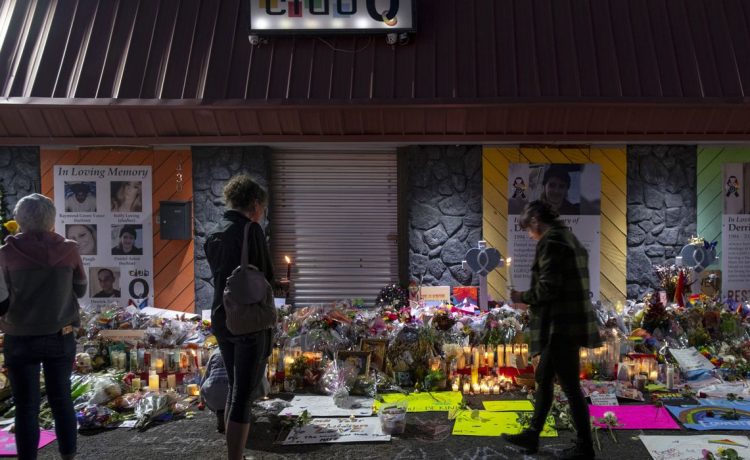 Vandals struck a sign at the Colorado Springs, Colo., headquarters of Focus on the Family on Thanksgiving Day, local police and the evangelical Christian ministry confirmed.

“Their blood is on your hands five lives taken” was daubed in paint on the sign, visible at the corner of Briargate Parkway and Explorer Drive. The vandalism took place five days after a gunman entered Club Q, an LGBTQ nightclub and killed five people, wounding 19 others.

A sign was also placed at the site quoting the New Testament book of 2 Corinthians 11:14-15, which notes, “Satan disguides himself as an angel of light … their end will correspond to their deeds.”

According to the Twitter feed of the Colorado Peoples Press, a group called the “Front Range Queer Community” took credit for the vandalism.

A press release and report back from those who completed this direct action: pic.twitter.com/LszpJrTmzX

“It is no accident that this happened in Colorado Springs, a city steeped in homophobia, transphobia and white supremacy,” a news release credited to the group states. “It is no surprise that someone did this in the city that is home to such a hateful organization as Focus on the Family,” the statement continued, accusing the Christian ministry of a “goal … to eradicate queerness.”

Anderson Lee Aldrich, the 23-year-old arrested in the Club Q shooting, was not mentioned by the “Front Range Queer Community” in their statement. Mr. Aldrich’s attorneys said the accused gunman “is nonbinary. They use they/them pronouns, and for the purposes of all formal fillings, will be addressed as Mx. Aldrich,” according to a Wednesday report in The Washington Times.

The Colorado Springs Gazette on Friday quoted police Sgt. Jason Ledbetter as saying law enforcement is investigating. “There is no suspect information at this time,” he told the newspaper.

The Colorado Springs Police Department did not immediately respond to a reporter’s request for comment.

In a statement to The Times, Focus president Jim Daly said the shooting’s aftermath “is a time for prayer, grieving and healing, not vandalism and the spreading of hate.

He said, “The families of the five individuals killed in Saturday night’s senseless attack are in our prayers. We urge everyone to pray for peace and we also pray for the individual or group responsible for this mischievous and unwarranted defacing of our ministry’s property.”

Focus on the Family is a 45-year-old Christian ministry whose radio programs are heard on a number of radio stations in the D.C. area and across the country. They moved to Colorado Springs in 1991 from southern California, one of the first of many evangelical organizations to relocate there.