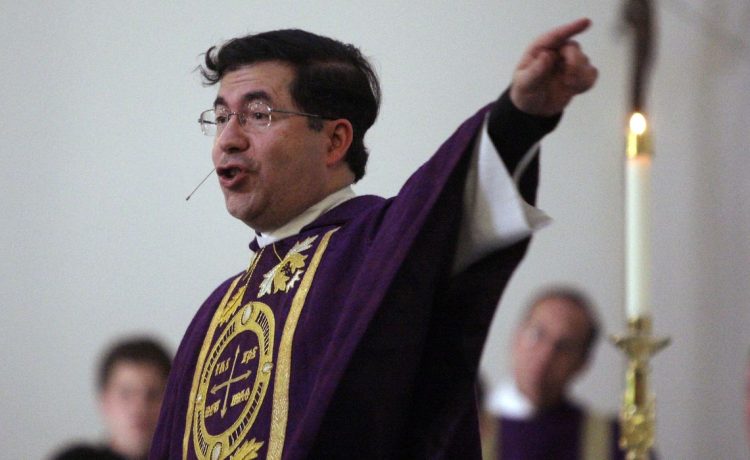 Frank Pavone, a leading U.S. Catholic voice against abortion and founder of the group Priests for Life, has been defrocked on direct orders from the Vatican for disobeying his superiors and “blasphemous” comments on social media.

Archbishop Christophe Pierre, the Vatican’s papal nuncio and chief diplomatic representative in the U.S., revealed the decision on Mr. Pavone in a Dec. 13 letter to U.S. Catholic bishops. The letter, obtained by the Catholic News Agency, said the move was made Nov. 9 and there was no avenue for appeal.

The 63-year-old priest has been one of the loudest voices in the American abortion debate, at one time posting on social media a video of an aborted fetus that he had placed on the altar.

He also has been an outspoken supporter of pro-life politicians such as former President Donald Trump and a harsh critic of President Biden, Hillary Clinton and other Democratic politicians who favor abortion rights. His Twitter page shows him shaking hands with a smiling Mr. Trump.

In the letter to the U.S. bishops, Archbishop Pierre said “Mr. Pavone” had been “laicized,” meaning he could no longer represent himself as a priest of the Roman Catholic Church.

The move followed a church legal proceeding that concluded he was guilty of “blasphemous communications on social media and of persistent disobedience of the lawful instructions of his diocesan bishop.”

Mr. Pavone said over the weekend that he did not know of the judgment against him until the letter’s contents were revealed.

The move is unlikely to resolve the deep divisions in the American Catholic Church over abortion policy, divisions only heightened by the Supreme Court decision this summer striking down the Roe v. Wade decision.

The U.S. Conference of Catholic Bishops, which has frequently clashed with the more liberal-leaning papacy of Pope Francis, last month endorsed what is seen as a conservative slate of leaders who said they would step up efforts to end abortion in the country.

Mr. Pavone struck a defiant note in a Twitter post and in a video message on social media Sunday.

Hi friends… So in every profession, including the priesthood, if you defend the #unborn, you will be treated like them!
The only difference is that when we are “aborted,” we continue to speak, loud and clear.

“So in every profession, including the priesthood, if you defend the unborn, you will be treated like them!” he wrote. “The only difference is that when we are ‘aborted,’ we continue to speak, loud and clear.”

The priest’s diocese in Amarillo, Texas, had placed restrictions on his anti-abortion ministry more than a decade ago, but Mr. Pavone remained active through Priests for Life, which is now based in Florida and which he has headed since 1993.

“I’ve been persecuted in the church for decades, decades. This is nothing new for me,” he said Sunday in his video message. “They just don’t like the work I’m doing for these babies.”

But the Vatican also showed no signs of backing down.

“Father Pavone was given ample opportunity to defend himself in the canonical proceedings, and he was also given multiple opportunities to submit himself to the authority of his diocesan bishop,” a statement included with Archbishop Pierre’s letter read. “It was determined that Father Pavone had no reasonable justification for his actions.”