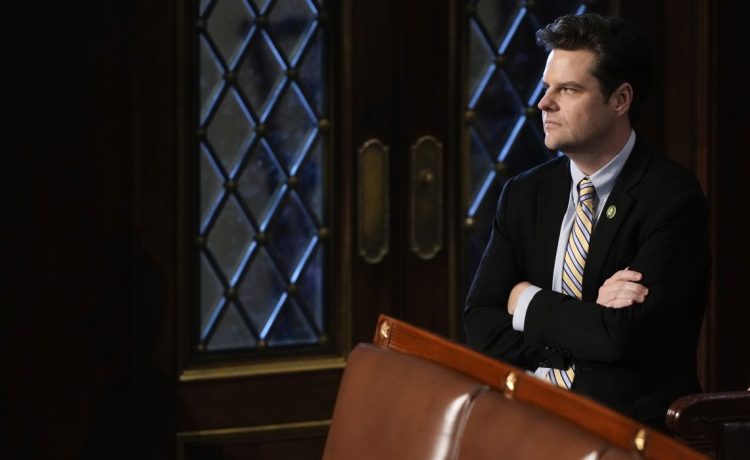 Rep.-elect Matt Gaetz has emerged as one of House GOP leader Kevin McCarthy’s biggest detractors in the struggle over who will serve as House speaker, but his motives may be as much personal as political.

Mr. Gaetz’s critics say his iron-clad opposition is partially rooted in Mr. McCarthy’s refusal to defend him last year when he was accused of sex trafficking, a charge for which the Florida Republican was eventually cleared.

“You just get that sense,” South Carolina GOP Rep.-elect Nancy Mace told the Washington Times. “You hear the rumor that’s what all this is about.”
Even one of the GOP holdouts opposing Mr. McCarthy said they were surprised by how deep Mr. Gaetz’s animosity goes.

“Everyone keeps saying this isn’t personal, it’s about the rules and the speaker’s power over individual members, about how the House should function,” one of the Republican holdouts said privately. “Some genuinely feel that, but I can’t really say that about Matt.”

Mr. Gaetz was first elected to the House in 2016 to replace Jeff Miller — a longtime confidant of Mr. McCarthy who now is a lobbyist and GOP fundraiser. Since taking office, Mr. Gaetz has cut a conservative profile as one of former President Donald Trump’s diehard loyalists in the House.

While embracing the ex-president, Mr. Gaetz has also taken populist stances contrary to the political establishment in Washington.

In February 2020, Mr. Gaetz further separated himself from the Washington crowd by pledging not to accept campaign contributions from federal political action committees. At the time, Mr. Gaetz argued the move was a logical extension of his opposition to what Mr. Trump labeled the Washington “swamp.”

“Honest capitalism is under attack. Not just from Bernie Sanders, Antifa and the radical left — but by special interests and political action committees,” said Mr. Gaetz.

When making the pledge, Mr. Gaetz’s political star seemed to be rising with talk of a potential U.S. Senate run or prime-time TV slot. All of that was shattered, however, when the Justice Department opened an investigation in 2020 of Mr. Gaetz for alleged sex trafficking, which stemmed from his relationship years earlier with a 17-year-old girl.

Mr. Gaetz, 40, denied wrongdoing but he was dogged by the allegations for nearly two years. Mr. McCarthy stayed silent throughout the imbroglio, leading some to speculate that is the reason for Mr. Gaetz’s opposition.

Federal prosecutors decided in September 2022 not to bring charges.

“I don’t know how you defend someone who allegedly, you know, sex-trafficked underage girls,” said Ms. Mace. “There’s no defense in that.

Mr. Gaetz did respond to requests for comment on this story. At least one ally of Mr. Gaetz, however, told the Washington Times that he was operating in good faith.

“A lot of people will talk, but I think he’s staked out a position that has remained consistently clear,” said the GOP lawmaker, who along with Mr. Gaetz is opposing Mr. McCarthy. “He’s fighting against a style of politics that doesn’t value individualism, but runs you over if you don’t acquiesce.”

“I can’t get into his head,” said Rep.-elect Don Bacon, Nebraska Republican. “But all the opposition seems personal against Kevin because [opponents] have been given every single demand but having one or their own as speaker.”