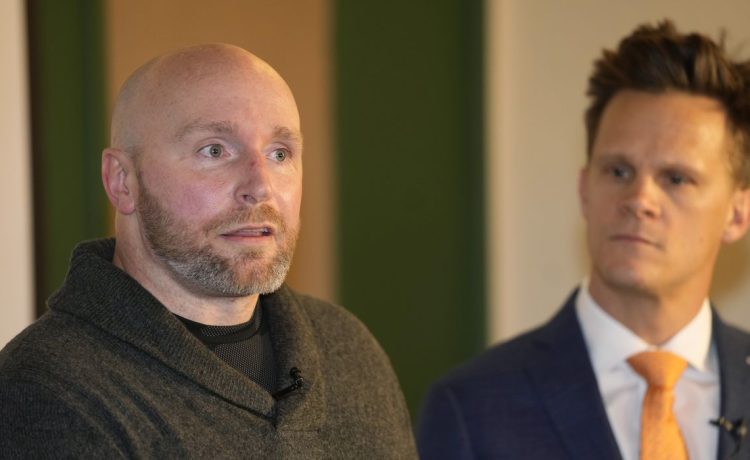 A Colorado man who said he was raped and sexually assaulted more than 100 times by a Roman Catholic priest in Colorado between 1998 and 2003 sued the priest, the Archdiocese of Denver and a local parish.

Scott Verti, 38, says the church knew Timothy Evans, then a priest at St. Elizabeth Ann Seaton Church in Fort Collins, was a threat.

Evans was convicted in 2007 on sexual abuse charges and sentenced to 18 years in prison but was paroled in 2020. The Vatican removed him from the priesthood in 2013.

The lawsuit, filed Thursday in Denver County District Court, did not list requested damages, but it did ask for a jury trial.

Mr. Verti was able to file the lawsuit, his attorneys said, because of a 2021 Colorado law creating a “lookback window” during which victims can sue over past abuse despite expired statutes of limitations. He agreed to be named in court documents “in the hopes of encouraging other victims to come forward,” his lawyers said.

The suit says the Denver archdiocese knew of Evans’ abuse before the priest was assigned to the Fort Collins parish.

“As the complaint details, Father Timothy Evans was a violent sexual predator who should have never been anywhere near children,” said attorney Leander L. James, a national advocate for abuse victims who will be assisting Denver trial attorney Kurt Zaner with the case.

“I want other abuse survivors to know they are not alone and there is hope for justice,” Mr. Verti, a former altar boy, said in a statement. “The innocence of my childhood was stolen, and my adult life was corrupted because of this abuse. The litigation process so far has been incredibly cathartic by giving me a sense of control in my life I’ve never felt.”

During the time of the abuse, he worked as an altar boy and spent long hours at the parish, including Saturday nights and Sunday mornings. Court documents say Evans used fear and intimidation as an authority figure to control his victim and ensure Mr. Verti did not disclose the abuse he suffered.

The Associated Press said Mr. Verti “was deep in the throes of an addiction that developed as a result of the abuse,” but he found help through therapy.

Zach Hiner, executive director for the Survivors Network of those Abused by Priests (SNAP), praised Mr. Verti for suing.

“SNAP stands with Scott and applauds his bravery and courage as he seeks to hold the Church accountable for the abuse and cover-up he suffered,” Mr. Hiner said in the statement released by Mr. Verti’s attorneys. “We hope that Scott’s example will provide hope and encouragement to other survivors throughout Colorado, and we are confident that his speaking out today will encourage others to speak out tomorrow.”

Kelly Clark, director of public relations and publications for the Denver archdiocese, said the church does not comment on pending litigation. She said the archdiocese could not confirm Mr. Verti’s claim that he applied for help under the church’s “Reparations and Healing Protocol” because the details of who the program assists are confidential.