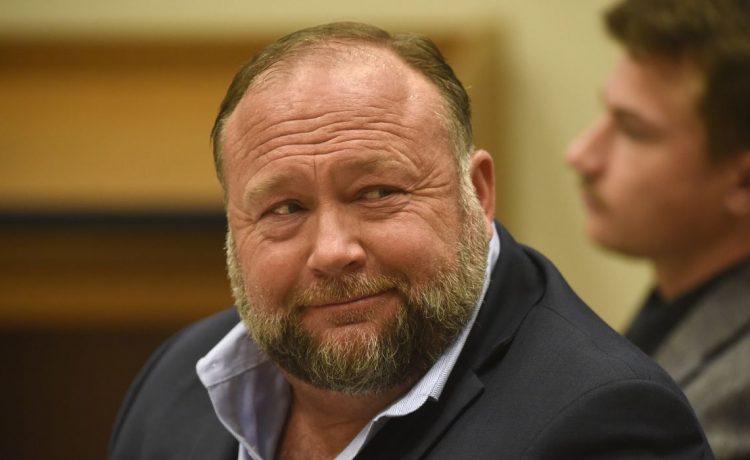 Legal scholars say the victims of Sandy Hook conspiracy theorist Alex Jones are unlikely to collect much of the more than $1 billion that juries have ordered him to pay.

On Wednesday, a Connecticut jury told Jones to pay $965 million to the families of Sandy Hook Elementary School shooting victims and an FBI agent for falsely claiming the rampage was a hoax. That follows the $50 million a Texas jury awarded in August to the family of another slain child after a separate trial.

In addition to these compensatory damages, Jones still faces punitive damages and a third trial in Texas. It’s unlikely that he has the money to cover even the $1 billion awarded so far, according to most law experts.

“Although it may be an emotionally satisfying number, the plaintiffs are unlikely to recover in this case,” said Sharon Dolovich, a professor at the UCLA School of Law. “Unless Alex Jones happens to be a billionaire, the damages award will function mostly as a symbolic condemnation of his reprehensible behavior.”

Forensic economist Bernard Pettingill, who testified during the Texas trial, estimated that Jones likely had $135 million to $270 million between his wealth and assets from his media company Free Speech Systems.

Attorney Chris Mattei, who represented Sandy Hook families in the Connecticut lawsuit, expects the $1 billion figure to go up as families sue Jones for punitive damages.

“Is it possible that this figure could go up?” Mr. Mattei said during a Wednesday appearance on “Alex Wagner Tonight”. “It’s actually very likely.”

But any future verdicts will likely be symbolic as well.

The Connecticut jury on Wednesday awarded various amounts of damages to plaintiffs, who testified that Jones sparked years of harassment online and at their homes.

During both the Texas and Connecticut cases, judges found his media company Free Speech Systems liable for damages by default after he declined to share his finances.

Free Speech has already declared bankruptcy. Many legal observers expect Jones will do the same, dragging out the payment process for years as the families try to recover the money piecemeal in bankruptcy court.

Ronald J. Rychlak, a professor and former associate law school dean at the University of Mississippi, says it’s “very likely” the litigants will compromise on a lower amount rather than wait so long for compensation.

“It’s possible, maybe even likely, that the trial judge will reduce the award. Either way, there will be an appeal where damages will again be argued,” Mr. Rychlak said. “Assuming the verdict stands, there will probably be an eventual agreement between the parties, and it will be for an amount well below $1 billion.”

If Jones and the plaintiffs do not reach a payment agreement, Mr. Rychlak said, the judge can order him to pay. If he still does not, both sides will go back in front of the judge, who can design a payment plan at that point.

After rehearing requests and appeals, the judge will eventually set a payment timeline sometime in the distant future.

If Jones tries to avoid payment by leaving the country, he will be in contempt of court, prompting the seizure of his U.S. assets and an extradition campaign.

During his testimony at the Connecticut trial, Jones admitted that the Sandy Hook shootings happened. But he also mocked the proceedings as a conspiracy to suppress his free speech rights.

Immediately after Wednesday’s $965 million verdict, Jones asked his Infowars audience for donations, saying he had “no money” and pledging that any contributions would “not go to these people,” referring to the families of the victims.

While large for a defamation case, the $1 billion payout is not the biggest in a civil jury verdict.

In 2011, a Texas jury awarded $150 billion in damages to the family of a man who died 12 years after being severely burned on his eighth birthday. Legal scholars believe the personal injury award is the largest civil verdict in U.S. history.

Twenty children and six adults died in the Sandy Hook school shooting on Dec. 14, 2012. The families of five children and three school employees sued Jones in Connecticut, where the attack occurred.

Their lawsuit accused Jones and his company Free Speech Systems of profiting from the mass killing to grow his subscriber base.

William A. Bonner, a civil rights attorney in Glen Mills, Pennsylvania, said the Jones case is “not the best example of what’s happening to free speech in America today.”

“I don’t agree with his remarks or support his opinions in any way,” said Mr. Bonner, a former radio host. “However, if we do not have the ability to debate issues freely in society, our culture will become authoritarian.”