The Great Days > Automotive > [VIDEO] Has the C8 ZR1’s LT7 Engine Been Confirmed by this Shipping Pallet Holding an LT6?
Automotive

[VIDEO] Has the C8 ZR1’s LT7 Engine Been Confirmed by this Shipping Pallet Holding an LT6? 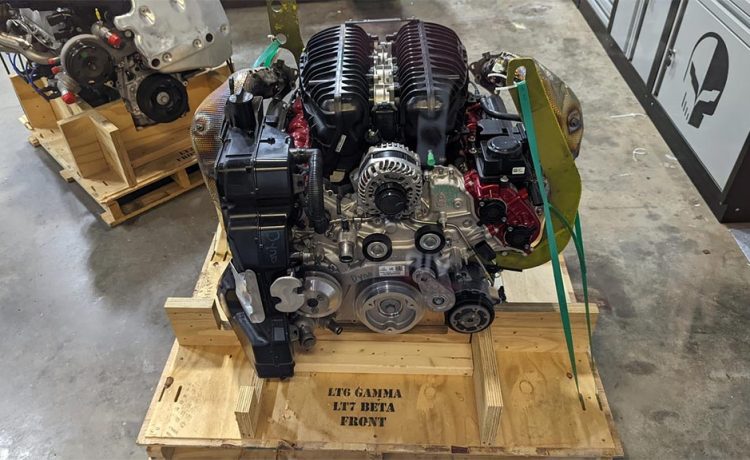 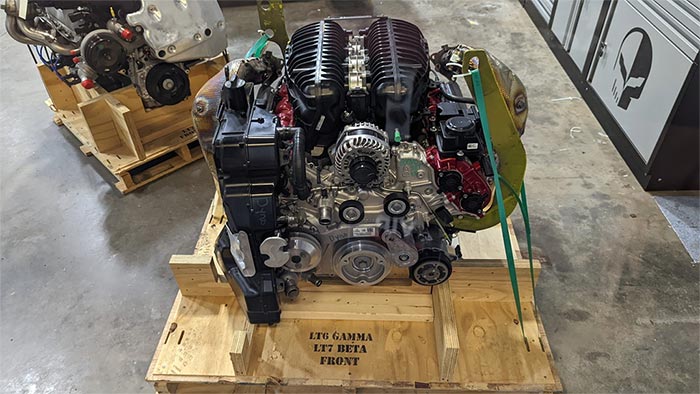 We attended the 28th Anniversary Celebration at the National Corvette Museum in September, and one of the seminars featured this LT6 “crate” motor that was on a shipping pallet inside the Museum’s working garage area. The NCM’s Brian Baker held a Q&A with attendees and even challenged a young Corvette enthusiast to find some of the rocket easter eggs located on the engine.

Unbeknownst to us at the time, one side of the shipping crate may have offered a hidden clue to the next engine in the anticipated C8 Corvette line-up.

We captured a quick walk-around video of the motor on the pallet, and on the side which holds the front of the motor were stencils of the engine designation that was hidden under a black label. The engine we captured was most definitely the LT6 from the Z06 and it had gone through the process of being assembled at the Performance Build Center and then shipped to an off-site dyno facility where it was run for 20 minutes as its final validation. You can see green markings in our video showing “dyno” on various parts of the motor, although we are unsure why those are there.

Fast forward two months, and this is where things get interesting. That same LT6 engine and its shipping crate are still at the NCM. In a thread that originally asked about the motor being at the museum, one member shared a photo of it taken before the NCM Anniversary show without the cover over the stencils. As you can see that the pallet was specifically constructed to hold the LT6 and LT7 motors. 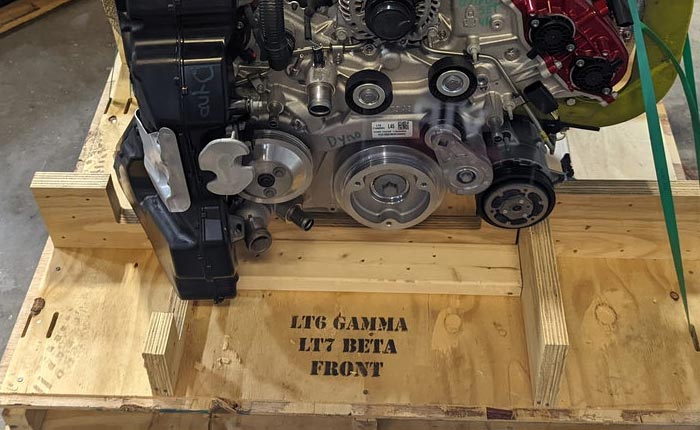 The LT7 is believed to be the twin-turbo variant of the 5.5L engine, and it is expected to be featured in the upcoming C8 ZR1. Of course, it’s just a stencil and not the engine itself, but it leads us to believe the PBC may already be building and testing beta versions of the LT7 motor.

The image comes from the Corvette Forum, and as expected, the discussion over there is quite lively.

In my walk-around video below, you can see I barely caught the label covering the stencils and didn’t even think to look closer at it because it was just a black sticker or other covering over it.

As one member put it, maybe this engine will be in the C8 Corvette priced at $169,900 as one of the early C8 threads once predicted.

It’s believed the C8 Corvette ZR1 with the LT7 will make somewhere around 850 hp. The top dog of the C8 lineup will come after the ZR1 and may be the tribute to ZORA with the LT7 combined with the E-RAY all-wheel drive hybrid set-up that will offer 1,000 hp. Of course, all this is speculation, but several clues have presented over the years that make us believe this is the roadmap of future C8 development.

[VIDEO] Are Those C8 Corvette Mules With the Center Mount Exhaust Actually the Twin-Turbo ZR1?

MotorTrend: The C8 Corvette ZR1 Will be a Twin-Turbo DOHC V8 Hybrid with 900 HP!