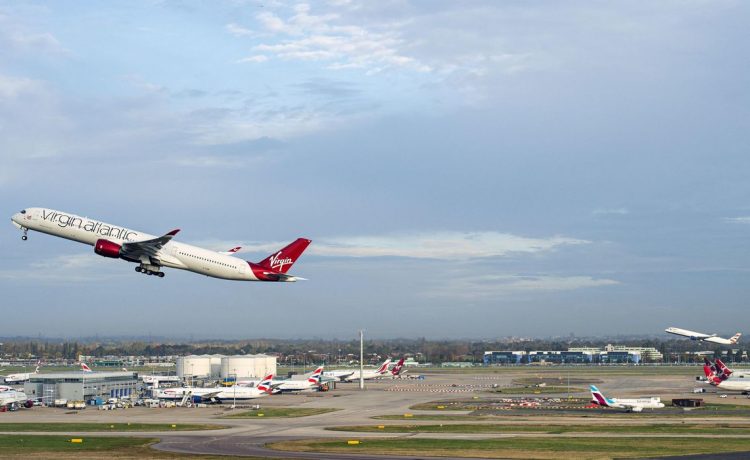 Virgin Atlantic will fly the first trans-Atlantic flight with net zero carbon emission next year by using sustainable fuel made from used cooking oil and fat, the company announced Friday.

The flight, which will go from London to New York in a Boeing 787 aircraft, will be subsidized by the British government, hoping to model a way for other planes to switch from carbon-emitting jet fuel to sustainable aviation fuel (SAF).

“The use of 100% SAF on the flight, combined with carbon removal through biochar credits — a material that traps and stores carbon taken from the atmosphere — will make the flight net zero,” Virgin Atlantic explained in its announcement.

Safety regulations allow a fuel blend of only 50% SAF and 50% kerosene, according to the Financial Times. Part of the flight’s purpose is to prove that a 100% SAF flight is safe for travelers.

U.K Transport Secretary Mark Harper said, “For decades, flying from London to New York has symbolized aviation’s ability to connect people and drive international progress. It’s now going to be at the forefront of cutting carbon emissions from flying.”

SAF has lifecycle carbon emissions more than 70% lower than the rate of emission resulting from conventional jet fuel.

“This challenge recognizes the critical role that SAF has to play in decarbonizing aviation and the urgent collective action needed to scale production and use of SAF globally,” Virgin Atlantic CEO Shai Weiss said.

SAF use is not a new development, having been introduced in 2011. More than 450,000 flights have taken place with SAF making up some part of the fuel used, according to the International Air Transport Association, headquartered in Montreal.

The fuel’s expensive production process has forestalled any mass adoption of the fuel source. It can, however, be used in existing planes like the Boeing 787 without modifications.

“This is critical and very beneficial for the aviation industry, because there is no need to invest in new infrastructure or new aircraft, and it’s great for airports too, because they can use the same storage and fueling infrastructure,” University College London energy professor Andreas Schafer told CNN.

Virgin Atlantic’s commitment to SAF goes beyond the trans-Atlantic flight planned for next year, with the airliner aiming to use SAF for 10% of its fuel needs by 2030.

Gevo’s fuel uses sugars from nonedible industrial corn. The proteins from the corn are fed to livestock, whose manure is then converted to natural gas and fertilizer.