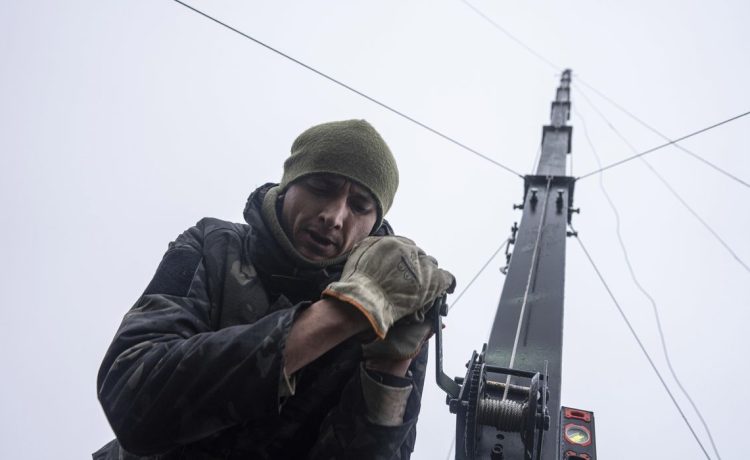 KYIV, Ukraine — President Vladimir Putin claimed that Russia is ready for talks to end the war in Ukraine even as the country faced more attacks from Moscow – a clear sign that peace wasn’t imminent.

Putin said in a state television interview, excerpts of which were released on Sunday afternoon that Russia is “prepared to negotiate some acceptable outcomes with all the participants of this process.”

He said that “it’s not us who refuse talks, it’s them” – something the Kremlin has repeatedly stated in recent months as its 10-month-old invasion kept losing momentum.

Putin also repeated that Moscow has “no other choice” and said he believed the Kremlin was “acting in the right direction.”

“We’re defending our national interests, the interests of our citizens, our people,” he said.

Putin’s remarks come as attacks on Ukraine continue. A country-wide air raid alert was announced twice on Sunday alone, and three missiles in the afternoon hit the city of Kramatorsk in the partially occupied Donetsk region, local officials reported.

SEE ALSO: Russian landmines will pose dangers to Ukraine long after the fighting is over

The missiles hit an industrial area of the city, and there weren’t any casualties, according to the Ukrainian governor of Donetsk, Pavlo Kyrylenko. Kyrylenko said that the city of Avdiivka was also attacked on Sunday with six rounds of shelling, and a woman was wounded there.

Elsewhere in the front-line region, around the city of Bakhmut, where fierce battles have been underway in recent weeks, the Russian forces were struggling to keep up the pace of their offensive, a U.S.-based think tank reported this weekend.

“Russian forces’ rate of advance in the Bakhmut area has likely slowed in recent days, although it is too early to assess whether the Russian offensive to capture Bakhmut has culminated,” the Institute for the Study of War wrote in its recent update.

The think tank cited Russian military bloggers, who it said have recently acknowledged “that Ukrainian forces in the Bakhmut area have managed to slightly slow down the pace of the Russian advance around Bakhmut and its surrounding settlements.”

Sources on Ukrainian social media “previously claimed that Ukrainian forces completely pushed Russian forces out of the eastern outskirts of Bakhmut” around Dec. 21, the report added.

“Russian forces will likely struggle to maintain the pace of their offensive operations in the Bakhmut area and may seek to initiate a tactical or operational pause,” the institute concluded.

A day before, a deadly Russian attack on the southern city of Kherson , retaken by Ukrainian forces last month, killed and wounded scores of people.

The Russian forces shelled Ukrainian-held areas of the partially occupied Kherson region 71 times over the past 24 hours, including 41 attacks on the city of Kherson, the region’s Ukrainian governor Yaroslav Yanushevich reported on Sunday.

According to the official, 16 people have been killed, including three emergency workers killed in the process of demining the Berislav district of the region. Yanushevich said that 64 more have been wounded.

In the neighboring Dnipropetrovsk region, the city of Nikopol was shelled overnight from heavy artillery, Gov. Valentyn Reznichenko said. No casualties have been reported.