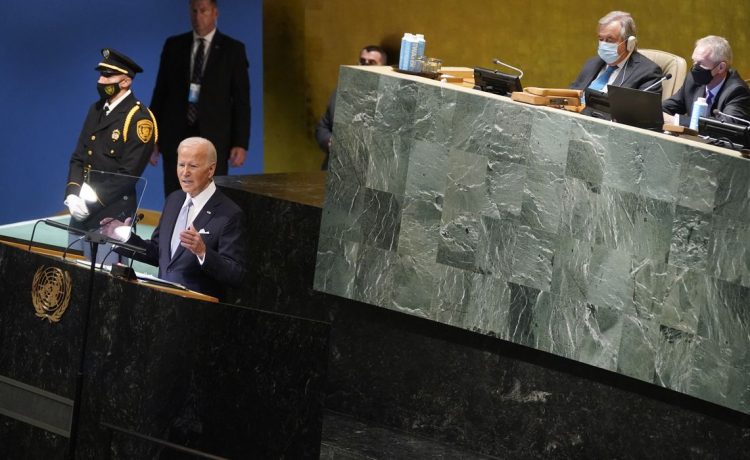 President Biden on Wednesday led a parade of Western leaders denouncing Russia for its “outrageous” invasion of Ukraine, arguing that Mr. Putin’s new threats to escalate a “brutal, needless” war are a sign of weakness, not strength, as Russian troops suffer major losses on the battlefield.

In his address to the United Nations General Assembly on the precipice of a significant escalation in Russia’s ground war, Mr. Biden called on world leaders to unite in rebuking the Kremlin.

“This world should see these outrageous acts for what they are,” he said. “No one other than Russia sought conflict.”

Just hours earlier, Russian President Vladimir Putin announced in a brief but belligerent national address the mobilization of 300,000 military reservists as the Kremlin attempts to turn the tide after a series of tactical embarrassments in Ukraine. On Tuesday, four Russian-controlled regions in Ukraine announced plans to hold hastily-organized plebiscites to formally join the Russian Federation.

The Russian leader said it was unnamed Western allies of Ukraine who were engaged in what he called “nuclear blackmail” by threatening to hit the Russian homeland and warned darkly that Moscow was ready to respond in kind.

“When the territorial integrity of our country is threatened, to protect Russia and our people, we will certainly use all the means at our disposal,” Mr. Putin said.

But the Russian leader found few defenders as world leaders gathered in New York for the annual gathering.

“He is doubling down by sending even more reservists to a terrible fate,” she added. “He is desperately trying to claim the mantle of democracy for a regime without human rights or freedoms. And he is making yet more bogus claims and saber-rattling threats.”

NATO Secretary-General Jens Stoltenberg told reporters in Brussels that Mr. Putin’s rhetoric was “reckless and dangerous” and the alliance was communicating directly to Moscow the readiness of the West to respond to a nuclear attack. He added NATO officials have seen no change in Russia’s nuclear readiness posture despite Mr. Putin’s threats.

German Chancellor Olaf Scholz, talking to reporters in New York as he attended the U.N. gathering, said the mobilization and the annexation votes represented an “act of desperation” because Mr. Putin knows “he cannot win this criminal war.” European Union foreign ministers were holding an emergency meeting Wednesday night in New York to discuss even more sanctions on Russia in light of Mr. Putin’s threats.

Even China, whose official press has largely endorsed Mr. Putin’s claim that Russia is fighting a defensive war in Ukraine against Western and NATO encroachment, suggested the Russian leader’s latest words and deeds threaten to make a bad situation worse.

“An emergency brake needs to be put on the situation in Ukraine at a time when the scale of the war is still manageable,” influential commentator Hu Xijin, former editor of the state-controlled nationalist Global Times, warned in a column Wednesday.

“There needs to be a cease-fire and negotiations rather than an ever-increasing showdown between Russia and NATO,” Mr. Hu wrote.

“Please don’t forget that there will be no absolute winner or loser in a military conflict between nuclear powers. Whoever tries to completely overwhelm the other side must be crazy.”

In a speech primarily devoted to the crisis in Ukraine, Mr. Biden called the proposed votes in occupied Ukraine a “sham” and warned that Russia was using the referenda as a pretext for annexation.

He said Mr. Putin’s “overt nuclear threats against Europe” a “reckless disregard” for the responsibilities under the U.N. non-proliferation agreement.

— David R. Sands contributed to this article, which was based in part on wire service reports.