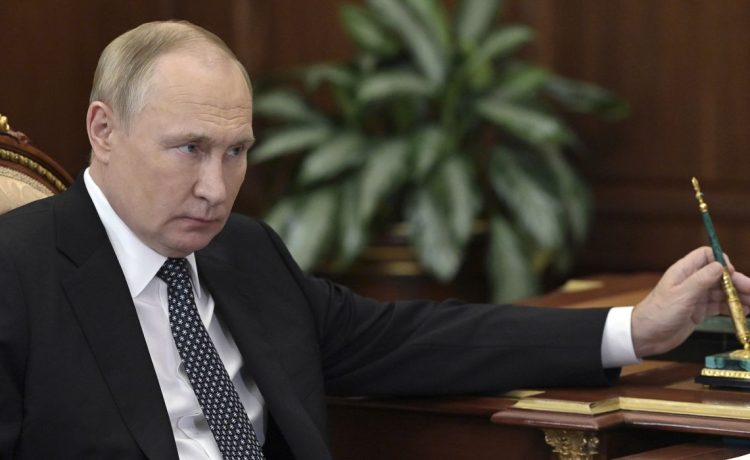 Russian President Vladimir Putin on Thursday ordered his troops to observe a 36-hour cease-fire in Ukraine, but Kyiv flatly rejected the idea and cast it as blatant “hypocrisy” from Moscow, while U.S. officials said that Mr. Putin would likely use any break in the fighting to rest and refit his weary forces for future assaults.

In a statement posted on the Kremlin’s website, Mr. Putin instructed Russian Defense Minister Sergei Shoigu to halt operations for 36 hours so citizens in Ukraine — including separatist enclaves now annexed by Russia — can observe the Russian Orthodox Christmas holiday this weekend. If implemented, it would mark the first cease-fire since the war began more than 10 months ago and may have provided the first tangible step by either side toward ending the fighting.

“Based on the fact that a large number of citizens professing Orthodoxy live in the combat areas, we call on the Ukrainian side to declare a cease-fire and give them the opportunity to attend services on Christmas Eve, as well as on the Day of the Nativity of Christ,” Mr. Putin said in the order.

Mr. Putin’s announcement came just hours after the head of the Russian Orthodox Church, Patriarch Kirill, publicly called for a cease-fire to mark the religious celebration. The Russian church has been a pillar of Mr. Putin’s power base for decades and its top clergy were open supporters of the decision to invade Ukraine.

But with Russian forces struggling to maintain even the minimal gains they have secured in the fighting, Mr. Putin is also facing pressure from other world leaders to find a path toward peace in Ukraine.

SEE ALSO: Biden warns Cabinet that Russia ‘not letting up’ on Ukraine

But the cold reaction from Kyiv and its Western allies leaves the fate of Mr. Putin’s proposed truce unknown. It’s also unclear whether Russian troops will honor it without a clear commitment that Ukrainian forces will do the same.

“There’s significant skepticism both here in the U.S. and around the world right now, given Russia’s long track record of propaganda, disinformation and its relentless attacks against Ukrainian cities and civilians,” Pentagon spokesman Air Force Brig. Gen. Patrick Ryder told a Pentagon briefing shortly after Mr. Putin’s offer was made public.

If Russia was truly interested in ending the violence and bloodshed, the Kremlin would pull its troops out of occupied territories and end the war once and for all, Gen. Ryder said.

“A so-called ceasefire brings neither freedom nor security to people living in daily fear under Russian occupation,” Ms. Baerbock tweeted.

The inability of Russia and Ukraine to agree on even a temporary cease-fire further underscores just how difficult it will be to bring them together for real peace negotiations. While both sides have said they’re open to the concept of peace talks, they remain miles apart in their demands and preconditions.

In a Twitter post, Mykhailo Podolyak, a senior adviser to Ukrainian President Volodymyr Zelenskyy, accused Moscow of blatant “hypocrisy” by calling for a temporary truce in the midst of a lengthy campaign targeting cities and occupying Ukrainian land.

“Ukraine doesn’t attack foreign territory & doesn’t kill civilians. As [Russia] does,” Mr. Podolyak wrote. “Ukraine destroys only members of the occupation army on its territory. … [Russia] must leave the occupied territories — only then will it have a ‘temporary truce.’ Keep hypocrisy to yourself.”

Mr. Zelenskyy himself said in his nightly address to the nation that the cease-fire offer was a sign of how badly the war is going for Moscow.

“They now want to use Christmas as a cover, albeit briefly, to stop the advances of our boys in [eastern Ukraine] and bring equipment, ammunition and mobilized troops closer to our positions,” the Ukrainian leader claimed.

Indeed, Mr. Putin’s overture came just days after Russia launched one of its most aggressive air assaults thus far on Ukrainian civilian targets over the New Year’s weekend, part of Moscow’s plan to destroy energy and water infrastructure during the cold winter months. Even as Mr. Putin proposed the cease-fire, Russian attacks continued in Ukraine.

Kyrylo Tymoshenko, deputy head of the Ukrainian presidential office, said Thursday that at least five civilians have been killed and eight more wounded by Russian shelling over just the past 24 hours.

Recent heavy fighting in the eastern city of Bakhmut has left about 60% of the city in ruins, Ukrainian officials said Thursday, underscoring the scope of destruction caused by Mr. Putin’s forces.

Asked about the Russian proposal at a White House briefing on U.S. border security, Mr. Biden said he is “reluctant” to respond to anything Mr. Putin says, but suggested it was a sign of the difficulties Russia’s forces were facing on the ground.

“He was ready to bomb hospitals and nurseries and churches on [December 25] and New Year’s,” Mr. Biden told reporters. “I think he’s trying to find some oxygen.”

Mr. Biden’s aides said that the tempo of recent Russian attacks was incompatible with the idea of a cease-fire, even a temporary one.

“From our perspective, there is one word that best describes that, and it’s ‘cynical,’” State Department spokesperson Ned Price told reporters Thursday. “It’s cynical in large part because it comes just days after Moscow perpetrated these New Year’s Day attacks on Ukraine’s civilian infrastructure” throughout the country.

“We have little faith in the intentions behind this announcement,” Mr. Price said. “Our concern … is that the Russians would seek to use any temporary pause in fighting to rest, to refit, to regroup, and ultimately to re-attack.”

Mr. Putin has given no indication he’s willing to pull forces out of eastern Ukraine. As part of any peace deal, Russian officials have said they will insist Ukraine acknowledge Russia’s “annexation” of four eastern Ukrainian provinces.

Ukraine has rejected those conditions. Virtually no government on earth has accepted Russia’s annexation claims.

Kyiv also insists that Russian officials be held on war crimes charges and make financial restitution for the damage they’ve caused in Ukraine.

Several rounds of peace talks early in the fighting produced no agreement or cease-fire.

Before the cease-fire was ordered, NATO Secretary-General Jens Stoltenberg was telling reporters Thursday he detected no change in Moscow’s stance on Ukraine, insisting that the Kremlin “wants a Europe where they can control a neighboring country.”

“We have no indications that President Putin has changed his plans, his goals for Ukraine,” Mr. Stoltenberg said in Oslo, the Associated Press reported.

— Staff writer Mike Glenn contributed to this report, which was based in part on wire service accounts.