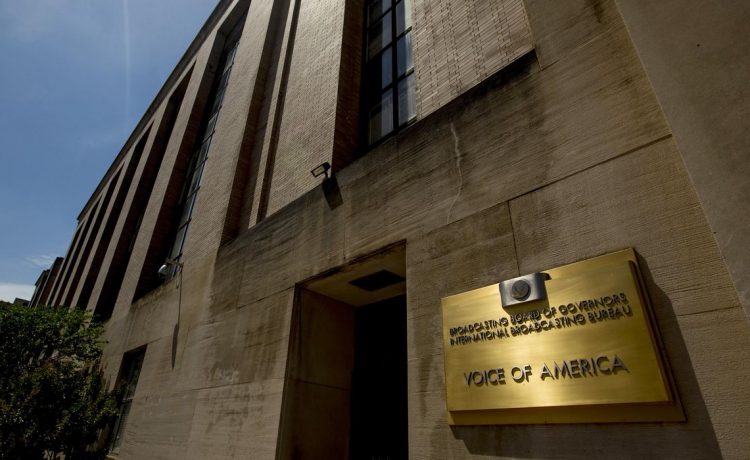 The Voice of America is canceling two Chinese-language programs focused on the standoff between China and Taiwan in a move critics say signals a softening of the broadcaster’s coverage of communist China.

The cancellations involving Taiwanese-American broadcasters were announced recently in an internal message to employees of the U.S. government-owned international news operation known as VOA.

VOA spokeswoman Anna Morris confirmed the program changes, but downplayed the notion that they represent a curtailing of China coverage, saying instead they are part of a larger effort by VOA’s Mandarin language service to shift from traditional television to digital platforms.

She said that later this month VOA Mandarin will also transition its “Eye on America” television program to web and social media.

The goal of the shifts is to “counter disinformation from China in a more timely and nimble way,” Ms. Morris added, asserting that VOA has “significantly strengthened” its coverage of Taiwan and China.

“We have increased our on-the-ground presence in Taiwan from two to eight journalists,” she said. “We are putting more emphasis on the web and social media, where Chinese and Taiwanese viewers can access content on demand, more easily than they could over linear broadcast.”

VOA has said similar shifts were behind its decision in 2011 to cancel shortwave broadcasts into China during the administration of former President Obama. While the shifts included a push to broaden digital content projection, they drew criticism from some for limiting who in China could listen to VOA programs.

The broadcaster has also come under fire in the past from Republicans in Congress for programming that was viewed as too conciliatory toward China, and for promoting content that avoided controversial subjects.

A person familiar with the internal workings of both VOA and the U.S. Agency for Global Media (USAGM) which oversees all American government broadcasting internationally said both of the VOA programs slated for cancellation have a sharp focus on Taiwan.

The shows were hosted or produced by Taiwanese-Americans, including VOA veterans considered among the most seasoned and experienced in presenting Taiwanese affairs, the person said on condition of not being named in this article.

“What they are doing is taking off cutting edge programs that will produce broadcasts that are less offensive to China,” the person said.

The explanation from VOA that it is shifting from television to digital raises questions about the motive for ending the programs, the person added, noting that the same programs could be produced for digital platforms.

A VOA source said the broadcaster also recently hired a number of Chinese nationals as contractors, raising concerns the Chinese Communist Party will step up efforts to plant covert agents with the mission of trying to influence VOA broadcasts in ways favorable to Beijing.

The source noted that VOA’s Mandarin service has been producing some broadcasts that are very critical of China.

News that two programs are being canceled comes amid another controversy for U.S. government broadcasting.

President Biden has nominated former VOA Director Amanda Bennett to be the chief executive officer for USAGM, which directs six broadcasters including VOA and Radio Free Asia, with a budget for this year of $840 million.

Ms. Bennett came under fire in 2018 for her role in abruptly cutting short a live ongoing VOA Mandarin service interview with Chinese dissident Guo Wengui under pressure from China.

The Chinese government had threatened to block the accreditation of VOA’s Beijing bureau chief unless the interview was halted, VOA sources disclosed at the time.

VOA later fired the chief of its Mandarin service along with several other employees over the interview.

Some Senate Republicans are expected to oppose the nomination of Ms. Bennett, who was VOA director from 2016 to 2020 and who resigned in protest of Senate-confirmed Trump administration USAGM executive Michael Pack.

Mr. Pack, a conservative filmmaker, replaced all chiefs of the various government-funded broadcasters overseen by the agency before he was fired by Mr. Biden in January 2021.

The current interim chief executive of the USAGM is Kelu Chao.

The blog USAGM Watch stated in a post last month that the VOA and other broadcasters need better leadership.

“We hear from our former Voice of America (VOA) colleagues who are political refugees from communist China and the fanatical regime in Iran that they dread the possible return of recent VOA director Amanda Bennett as their new media agency boss,” the blog post stated.

“During her tenure, these Voice of America broadcasters were deeply traumatized in their lowest-employee-morale federal government workplace when five VOA China Branch editors, reporters, and producers — the VOA Mandarin Five — were suspended, and some were fired for what they say was bold journalism in exposing Beijing’s influence operations in the U.S. by interviewing Chinese whistleblower businessman Guo Wengui.”

Ms. Morris, the VOA spokeswoman, said the changes now being made by the broadcaster are “consistent with others we’ve made that are strengthening VOA’s coverage of China’s activities and their impact.”

Former VOA White House and foreign correspondent Daniel Robinson said he is skeptical of the explanation for the program cancellations against a backdrop of questionable USAGM management decisions since the Biden administration fired all Trump appointees very early on in Mr. Biden’s tenure.

“It seems far more than coincidental that these changes are occurring now, with U.S.-PRC tensions high over Taiwan, and in the wake of the Pelosi and other [congressional delegation] visits to Taipei,” Mr. Robinson said. “Something must be going on and I would wager that there would have been comms/consultations between the White House and USAGM.”