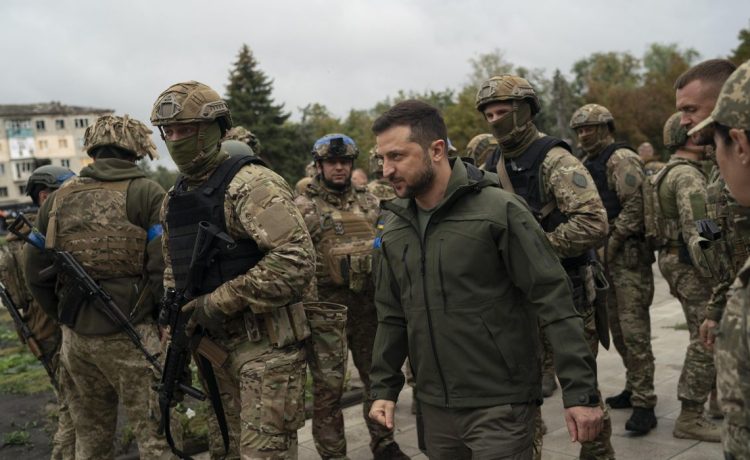 Ukrainian President Volodymyr Zelenskyy is traveling to Washington perhaps as soon as Wednesday for talks with Biden administration officials and an address to Congress on the state of the 10-month war with Russia, according to multiple news reports.

Mr. Zelenskyy has shot to global fame as the face of Ukraine’s unexpectedly dogged resistance to the Russian invasion, remaining in Kyiv even as Russian forces neared the capital early in the war and issuing nightly calls of defiance to the Kremlin. He spent part of Tuesday on a surprise visit to Ukrainian forces’ front lines in Bahkmut, the eastern Ukrainian town that is now the focus of some of the fiercest fighting of the war.

He can expect a rapturous welcome in Washington if the trip — which was not officially confirmed by the Ukrainian government — comes off. It would be the Ukrainian leader’s first trip outside the country since the fighting began and would likely require a major security effort to ensure his safe passage. His government has repeatedly pressed the U.S. and its allies for more military aid to fight off the Russian forces.

News of the trip was first reported by Punchbowl News on Twitter. One sign the trip was a go came when Democratic House Speaker Nancy Pelosi Tuesday evening sent out a terse letter requesting all members to be in the chamber Wednesday night for a session with “a very special focus on democracy.”

The U.S. has committed about $20 billion in security assistance to Ukraine since the invasion on Feb. 24, although there is concern President Biden will have to work harder to secure funding for Kyiv in the future with Republicans poised to take control of the House in January.

The visit would come just two days after Russian President Vladimir Putin made a rare, high-profile trip of his own, traveling to Belarus and sparking new talk that Belarus may soon join the fighting against Ukraine.

Mr. Zelenskyy’s government has expressed fears of a new attack from the north, but there are no signs to date that the government of Belarus strongman President Alexander Lukashenko is being dragged deeper into the conflict, U.S. military officials say.

“We don’t have any information that would suggest there is any type of imminent or pending cross-border activity from Belarus into Ukraine,” Brig. Gen. Patrick Ryder, a Defense Department spokesman, told reporters.

“Belarus and Russia have a standing relationship. The visit [between Mr. Putin and Mr. Lukashenko] in and of itself wasn’t that unusual,” Gen. Ryder added. “We’ll continue to keep a close eye on it.”

Analysts say Mr. Lukashenko likely deflected the Russian president’s attempt to coerce him into taking a more active role supporting Russia’s troubled war. Mr. Lukashenko said Russia recently installed the S-400 anti-aircraft and Iskander missile systems, which he says is needed for Belarus to contend with its own threats from the West and NATO.

“Lukashenko uses the rhetoric of defending Belarusian borders against the West and NATO in an effort to avoid participating in the Russian invasion of Ukraine,” according to a report from the Institute for the Study of War (ISW) think tank.

To join Mr. Putin’s “disastrous” invasion of Ukraine, the Belarusian leader would likely be forced to adjust his rhetoric to create a plausible explanation to his own people why he suddenly turned away from a fictitious NATO invasion threat that he manufactured, the ISW concluded.

While bracing for a possible Russian-Belarusan strike from the north, Ukrainian Foreign Minister Dmitro Kuleba told reporters in Kyiv Tuesday it was unclear what the two leaders actually agreed to.

“”The Putin and Lukashenko meeting is another dance they have performed,” Mr. Kuleba said, acccording to the Kyiv Independent. “According to the available information, no critical decisions were made at this meeting. Whatever happens, we are ready for any scenario.”

Mr. Zelenskyy’s reported visit to Washington would come as Mr. Putin has scheduled a Wednesday meeting with senior defense officials to discuss the war in Ukraine and the Kremliln’s military objectives for the coming year. In a rare admission, he told top representatives of Russia’s security services Tuesday that things were not all going to plan in the rump sections of Ukraine still in Russian hands.

“The situation in the Donetsk and Luhansk People’s Republics, in the Kherson and Zaporizhzhia regions is extremely difficult,” Mr. Putin said, according to official Russian press reports.
With its failures to achieve any success on the battlefield, Russia has adopted a strategy of firing hundreds of missiles and drones at critical civilian targets in Ukraine. It has resulted in frequent power outages for much of the country even as temperatures have dropped.