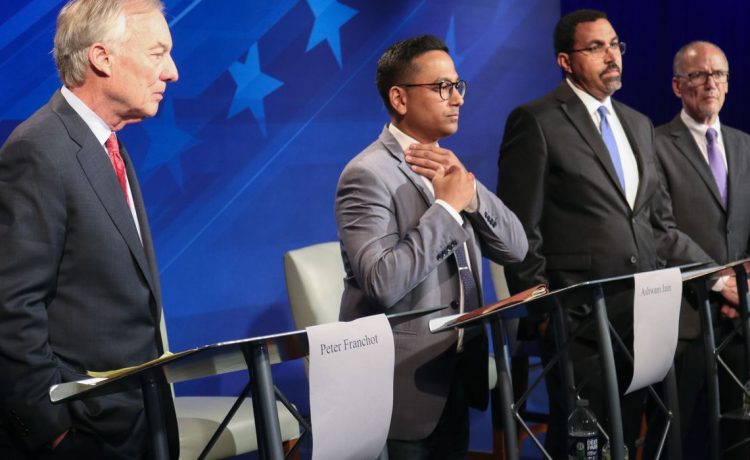 TAKOMA PARK, Md. — Peter Franchot kicked off Election Day on Tuesday by greeting volunteers, poll workers and voters as part of his final 12-stop push for the Democratic nomination for governor.

Mr. Franchot, the state comptroller, is looking to play the role of a dark horse in a Democratic race where much of the focus has been on the battle between Tom Perez — a former U.S. labor secretary and former Democratic Party chair endorsed by House Speaker Nancy Pelosi — and Wes Moore, a former non-profit CEO and best-selling author who was endorsed by Oprah Winfrey.

Democrats in solidly blue Maryland are fighting to regain control of the governor’s mansion after eight years of GOP leadership under Gov. Larry Hogan, who is term-limited and cannot run again.

Whoever emerges with the Democratic nomination is expected to quickly become the frontrunner in the general election.

The race for the GOP nomination pits Kathy Schultz, a former Hogan cabinet secretary, against state Del. Dan Cox, who has the endorsement of former President Donald Trump.

There is a good chance the winner of one, if not both, of the nomination races will not be known for several days because election officials will not start counting mail-in ballots until Thursday. And there are more than 200,000 mail-in ballots and more were arriving Tuesday.

For the candidates, it could be a case of hurry up and wait.

Mr. Franchot said it is “a confusing situation” that speaks to the need for the sort of government reforms he plans to implement as governor.

“The state board of elections and local board of elections problem with counting the mail-in ballots is just unacceptable, and people lose their trust and confidence in government regardless of the explanation when they see this kind of train wreck of inability to tabulate the voters that have been cast,” he told The Washington Times.

He worried that the delay would spur fears of shenanigans in the ballot tabulation.

“It is unacceptable because it feeds conspiratorial mistrust in government,” he said, “but it also challenges the trust and confidence of ordinary voters in the state who say, ‘Why can’t the state get its act together?’”

Mr. Hogan’s shadow has loomed large over both races. He has won praise from both sides of the aisle for his willingness to criticize Mr. Trump and for governing as a moderate in one of America’s most liberal states.

His approach frustrated hardline conservatives and hardcore liberals, prompting some of the candidates to run hard to the left and hard to the right in this year’s primary contest.

Describing himself as a “happy warrior” and an “outsider looking in,” Mr. Franchot told The times that the stakes of the gubernatorial race are “enormous.” He said his fiscally moderate, socially liberal brand is a good fit for the moment.

“Unfortunately we are heading into a very volatile, uncertain, economy and we already have a tremendous amount of suffering going on in the state and we need to be very careful about protecting the economic property we have and once we get through the recession rebuilding a lot of our small businesses across the state,” he said.

Mr. Perez, meanwhile, urged people to get out to vote.

Mr. Moore framed the race as a clear choice.

“Will we settle for the broken politics and policies of the past, or will we move forward together and build a state where we leave no one behind?” he said. “I ask for your vote. We can’t miss this moment.”

Voters in Maryland also were voting in primaries for the state legislature, U.S. House and U.S. Senate. The marquee race, though, was the gubernatorial race.

Voter turnout appeared to be low in several polling places on Tuesday, including at a community recreation center in Silver Spring where the number of campaign volunteers easily outnumbered voters.

The occasional voter that did show up found themselves bombarded with last-second pleas for support.

Evoya McKamey, a retired post office worker, said she cast her support for Mr. Perez, citing the civil rights work he did in the Obama administration.

“That pulled my attention to him,” Ms. McKamey said. “I’m confident he will be something different.”

The governor’s race in Maryland is one of the few potential bright spots for Democrats in an election cycle that is shaping up to be good for Republicans.

Political forecasters give Democrats the edge in the race.

Polls have shown both races have been fluid, and that a lot of voters were still making up their minds heading into Election Day.