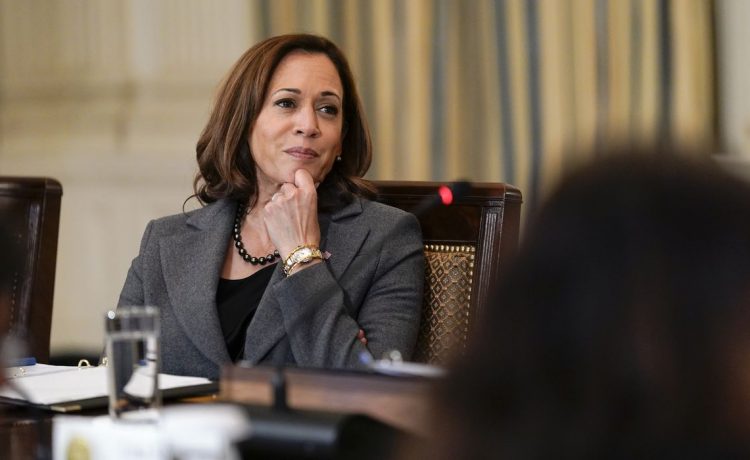 For Ms. Harris, the abortion issue offers what should be a safe foothold as her party eyes her as a fall-back option if President Biden does not run in 2024.

Ms. Harris on Tuesday sat next to President Biden at the second meeting of a task force forged to address the Supreme Court ruling that overturned Roe v. Wade and the national right to abortion. Yet the vice president spoke first, setting the tone as the host of the meeting.

“The Dobbs decision created a health care crisis in America,” Ms. Harris, seated at the center of a long table, told the task force. “We believe, and I certainly believe, that a woman should have the freedom to make decisions about her own body. The government should not be making those decisions for her.”

Ms. Harris singled out two swing states — Arizona and Wisconsin — for reimposing bans that stretch back to the 19th century in the wake of the court’s decision.

Mr. Biden said he ordered Education Secretary Miguel Cardona to take a look at ways to ensure access to contraception and information about birth control on college campuses, as some schools clamp down.

“Folks, what century are we in?” Mr. Biden said, before thanking Mr. Harris for her leadership on the task force.

Mr. Biden gave Ms. Harris a long to-do list during his first term, turning her into a perpetual czar of thorny problems.

Yet GOP critics lambasted her for failing to visit the southern border despite being tasked with addressing the illegal immigration crisis, and Democrats made little progress on their legislative ideas to protect voting rights.

Trips designed to bolster her foreign policy credentials haven’t gone smoothly, either. A recent tour of East Asia was marred by Ms. Harris accidentally touting the U.S. alliance “with the Republic of North Korea” during her visit to the demilitarized zone dividing the Korean Peninsula.

“She has just not caught fire. She has not latched onto an issue that allows her to show her best side,” said Ross Baker, a politics professor at Rutgers University.

Democrats are hoping abortion will be the issue that boosts Ms. Harris’s stock. She is serving as the first female vice president in U.S. history while over a dozen states impose strict restrictions on abortion, making her an obvious figure to take on the debate.

This weekend, she will travel to Austin, Texas, to meet with reproductive rights advocates ahead of a reception for Texas Democrats.

“She’s found her groove,” Donna Brazile, a former Democratic National Committee chairwoman, told CNN last month. “She has really been able to help the White House communicate its message on choice, on freedom and on equality — and that matters in a close election.”

Forecasters say Republicans will likely retake the House in this year’s mid-terms, but not by as many seats as initially thought, and may struggle to recapture the evenly divided Senate, in which Ms. Harris serves as a tie-breaker for Democrats.

Democrats see the Supreme Court’s abortion ruling as a key rallying point before the November contests. They hope Democrats concerned about abortion restrictions in GOP-led states, or the prospect of a national ban, will eat into the “red wave” that was anticipated earlier this year.

“The Supreme Court opened up a political debate that many Republicans would just as soon avoid, but unfortunately for them, the extreme elements within their party keep on adding fuel to the fire. For the vice president not to be engaged makes no sense,” said Jim Manley, a Democratic strategist and former spokesman for the late Senate Democratic leader Harry Reid of Nevada.

Democrats are seizing, in particular, on a plan by Sen. Lindsey Graham, South Carolina Republican, that would ban abortion nationwide after 15 weeks, though some in the GOP have distanced themselves from the idea after saying the topic would be up to the states.

It’s a strategy that could appeal to women voters and young people who are vital to Democrats’ fortunes in any election year, though it’s not without risks.

A Monmouth University poll this week found economic issues are a bigger factor for midterm voters than concerns about abortion rights or democracy. Independents, in particular, are focused on rising prices even though Democrats are zeroing in on things like abortion access.

Only 31% of U.S. adults approved of President Biden’s handling of abortion, the pollsters said, indicating Ms. Harris has work to do.

The administration is prodding Congress to codify the broad right to abortion that was overturned by the Supreme Court about 100 days ago. In the meantime, the Biden administration is taking executive action where it can.

Ms. Harris’ focus on the issue can be seen as a personal reset for Ms. Harris, who was hounded by low approval ratings early in her tenure and faced reports about dissatisfaction among her staff and high-level departure from her office.

Ms. Harris’s 2020 presidential bid started with promise but quickly fizzled. Still, she is floated as a potential 2024 alternative if Mr. Biden decides not to run, given her position as the No. 2 in the administration.

“Kamala won’t be the last woman to be vice president — or president,” Mr. Biden told guests at a Jewish New Year event last week in the White House East Room.

Some analysts say she still needs to prove she is the heir apparent.

“Harris is in a situation that has been faced by other vice-presidents, which is visibility without real power. Perhaps had she been longer in the Senate she might have made friendships that she could draw on to give Biden a lift on close votes,” Mr. Baker said.

Ms. Harris’s approval rating dove to around 30% in November 2021 and April of this year, according to averages compiled by FiveThirtyEight. Things have improved a bit recently, with her average close to 38%, though around half the country still disapproves of her performance.

“If Biden and Harris expect pro-abortion extremism to save them from their dismal job approval, they are mistaken,” said Mallory Carroll, the vice president of communications at Susan B. Anthony Pro-Life America.

She pointed to a Trafalgar Group poll that found majorities in every age group would prefer a federal bill that limits abortion after 15 weeks — with exceptions for rape and incest and allowing for state-level restrictions —  while a minority backs a Democratic plan that would allow abortion without limits.

“When Americans understand the reality of the Democratic Party’s radical agenda, they reject it,” Ms. Carroll said.