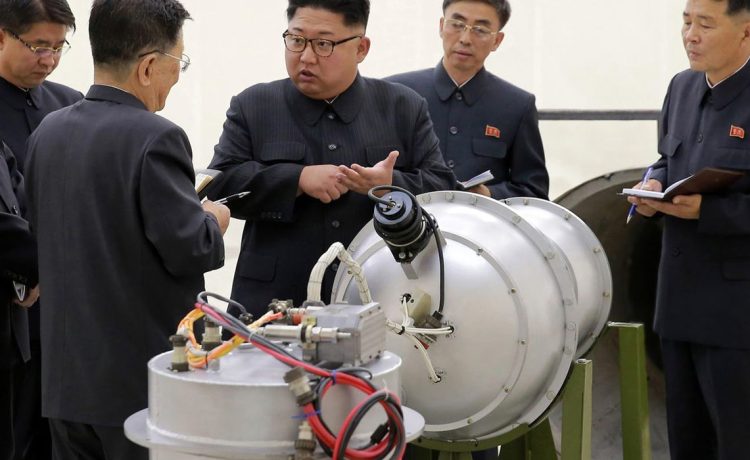 It’s the shoe that all of East Asia is still waiting to drop.

U.S. intelligence warned months ago that a region-rattling seventh North Korea nuclear detonation test could be imminent, but such a test has yet to occur and North Korea watchers say the reason is tied to Pyongyang’s complex relationship with the Communist Party-ruled government in neighboring China.

While the Biden administration is pushing for Beijing to convince North Korean leader Kim Jong-un not to go forward with a test, analysts say the strategy is unlikely to work because Mr. Kim is determined to use a test to prove his regime — despite its heavy economic reliance on Beijing — is not controlled by China.

The situation is causing deep unease among the U.S. and its allies in Northeast Asia, where a North Korean nuclear test, the first since 2017, could dangerously destabilize the region that’s already on edge over geopolitical tension emanating from Russia’s 9-month-old war in Ukraine and the shaky state of U.S. relations with China. Pyongyang has engaged in an accelerated schedule of ballistic and cruise missile tests since the start of the year, but has refrained from testing a new nuclear device.

The question of why Mr. Kim has waited is a source of speculation in Washington, where U.S. intelligence warned in May that preparations for an underground detonation were detected at Punggye-ri, the site where all six of the North’s previous nuclear tests occurred from 2006 to 2017.

Analysts say Mr. Kim likely calculated that China — North Korea’s main ally and economic backer — would be angered if the North tested just before or during the late-October Chinese Party Congress, as a test could trigger a security crisis that distracted from the congress.

But the reasoning behind the Kim regime’s decision to continue delaying during the month since Chinese President Xi Jinping secured an unprecedented third term in power at the congress is more elusive.

“They probably did not want to have a nuclear test right after the Chinese had their party congress because it would be too obvious that they were waiting for the Chinese Party Congress to be over,” said Yun Sun, who heads the China program at the Stimson Center in Washington.

“North Korea follows the ‘juche’ ideology of self-reliance, so they don’t want it to appear that they were subject to the Chinese determination for when they can or cannot have a test,” she said. “But we all know they were holding off their nuke test until after the party congress because the Chinese would not like it.”

Whether Beijing privately pressured the Kim regime or the regime made the determination on its own is a subject of debate among national security and intelligence officials. Some analysts contend the U.S. intelligence may have erred in assessing that a nuclear test was imminent.

“The U.S. and South Korean governments have announced since March that North Korea had completed all preparations for a nuclear test which could be ‘imminent,’” said Bruce Klingner, a former CIA Korea deputy division chief.

“That usually means a nuclear device has been emplaced and the tunnel packed with rubble to prevent venting of radioactive gases. Nuclear experts emphasize that a nuclear device would not remain in a tunnel for an extended period,” Mr. Klingner, a senior fellow with the Heritage Foundation, told The Times.

“Since the predicted test has not occurred during the subsequent months, the tunnel must not be packed and the nuclear test is not as imminent as previously indicated,” he said. “As has often been the case with North Korea, when the regime doesn’t do what experts predict, speculation arises as to the reasons or intended signals rather than admitting that the original assessment was incorrect.”

He added that “satellite imagery should discern when North Korea is packing the tunnel which will provide a more accurate indicator that a nuclear test is truly imminent.”

Such imagery has not been made public thus far, and anticipation of an imminent nuclear test was a central issue looming over President Biden’s meeting with Mr. Xi on the sidelines of the Group of 20 leaders summit in Indonesia earlier this month.

Mr. Biden told reporters after the meeting that he had told the Chinese president that Beijing has “an obligation” to try and convince North Korea not to proceed with a new nuclear test, asserting the U.S. will respond to such a test with moves to “defend ourselves and our allies South Korea and Japan, and that…we’d be more up in the face of China.”

But Mr. Biden also said he is uncertain “that China can control North Korea.”

The nature of the relationship between the intensely closed regimes in North Korea and China is vexing for the U.S. intelligence community, where some officials argue Mr. Kim is highly wary of angering his primary ally and much larger neighbor.

“For North Korea, what China thinks and does is actually more important than what we do in some ways,” CIA Director of Analysis Linda Weissgold told an audience this month at George Mason University.

At the same time, she said, “North Korea doesn’t like to be ignored and they will find ways to make sure we’re paying attention.”

CIA Director of Operations David Marlowe, who appeared on stage with Ms. Weissgold during the rare public event, offered the following when asked about the recent flurry of ballistic missiles tests by the North Korean regime: “I just think they’re a petulant child having a tantrum.”

He added that North Korea is “the most closed society on the planet, and even more so with the Covid lockdown.”

But others question whether the Biden administration is prepared for the geopolitical and security ramifications of a new nuclear test by the North.

Scrambling for a response

High-level U.S., South Korean and Japanese diplomats declared after meeting in Tokyo in late October that such a test will be met with an “unparalleled” response. But the administration has not clarified what the response may entail.

Following North Korea’s 2017 nuclear test, then-President Trump ordered three U.S. aircraft carriers — the USS Ronald Reagan, Theodore Roosevelt and Nimitz — to waters off the Korean Peninsula as a show of force to the Kim regime. But the confrontation veered off in an unexpected direction when Mr. Trump and Mr. Kim held a series of unprecedented but ultimately unsuccessful personal meetings that failed to produce a denuclearization agreement.

Allison Hooker, who helped shape U.S. policy toward North Korea in both the Obama and Trump administrations, last serving as an adviser to former President Trump and a senior National Security Council director for Asia, has said she hopes the Biden administration has a plan in place to back up its threats.

“I hope there really is something there because, what I’m concerned about is North Korea will test that, if they aren’t convinced that there is any action behind those words, they will continue to push the boundaries to see what really is there,” Ms. Hooker told “The Washington Brief,” a virtual panel event series hosted monthly by The Washington Times Foundation.

“The regime’s main goal through the decades has been recognition as a nuclear weapons state,” she told the panel in early November. “That’s what they’ve been advancing toward even since the mid-1990s, and they feel unencumbered now to advance toward this goal.”

The pace of North Korean missile testing has quickened during the years since Mr. Trump’s attempts at direct denuclearization diplomacy broke down in 2018. The regime has test-launched more than 40 ballistic missiles over the 12 months — a higher number than in any year since Mr. Kim took control of the regime more than a decade ago.

Following the most recent test on Nov. 18 of a Hwasong-17 intercontinental ballistic missile (ICBM), North Korean state media quoted Mr. Kim as vowing that his regime will not hesitate to use nuclear weapons if it faces nuclear threats from the U.S. and its allies. Mr. Kim sent another signal of his determination by being photographed bringing his wife and young daughter to watch the test with him, which Western analysts said was a sign North Korea was determined to keep its nuclear programs at least through another generation of Kims.

Mr. Kim’s influential sister Kim Yo Jong followed that with a warning that the United States will face “a more fatal security crisis” if it pushes too hard on the international community to condemn the Nov. 18 ICBM test.

The statement came hours after U.S. Ambassador Linda Thomas-Greenfield had told an emergency meeting of the U.N. Security Council that the U.S. will circulate a proposed presidential statement condemning North Korea’s banned missile launches and other destabilizing activities.

China and Russia, both of which hold veto power as permanent members of the Security Council, notably opposed any new pressure and sanctions on North Korea during the meeting — a development that suggests Beijing is less than motivated at the moment to exert whatever leverage it has to dissuade the Kim regime from carrying out a nuclear test.

“The real question is does China have the will to use any leverage it may have to try to prevent a seventh nuclear test, even if the effort to stop such a test won’t be successful?” said Ms. Yun at the Stimson Center.

“It’s a matter of China’s position,” she said. “Even if they try to prevent North Korea and they’re not successful, the world will still give them credit for trying. But if they don’t try, that says something about China’s position.”

“I don’t see China even willing to do that,” Ms. Yun added. “So that says something about their lack of will rather than their lack of leverage.”