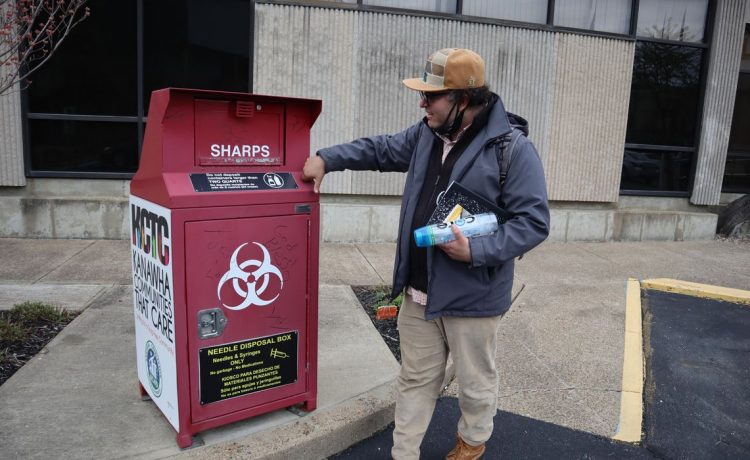 CHARLESTON, W.Va. — Dr. Frank Annie sees desperation in his hospital, where 30- and 40-year-olds come in with organ failure after injecting opioids with dirty needles. Joe Solomon finds it in the faces of those who line up in the church gyms and parking lots where he passes out overdose reversal drugs. Sheena Griffith encounters it on the streets she navigates with a car packed with HIV test kits and disinfectant for sanitizing syringes.

Annie is a Republican, Solomon a Democrat and Griffith an independent. All three are running for city council in the capital city of battle-scarred West Virginia, where the devastating toll of the opioid crisis transcends party politics.

“There’s so much unchecked pain, and it’s exhausting,” said Griffith, a recovery coach who’s battled substance use herself. “If we are a God-fearing state, a God-fearing country, where is God in the city of Charleston?”

More than a year after the Centers for Disease Control and Prevention declared Charleston the scene of the country’s “most concerning HIV outbreak” due to IV drug use, the three candidates say not enough has changed. And with millions of dollars from legal settlements with opioid manufacturers and pharmacies on the way specifically for treatment and recovery, they also feel the urgency of getting things right locally, where it matters most.

But people are divided, even if not on party lines. Against CDC guidance, state and local officials voted last year to criminalize programs that give people who inject drugs clean syringes to prevent the spread of HIV and hepatitis C. A proposal for a low-barrier shelter using COVID-19 relief money that would allow residents experiencing homelessness to receive substance use disorder treatment – initially endorsed by the city’s Democratic mayor – was tabled after people complained about the potential impact on nearby schools and businesses.

Charleston, which leans more liberal than the rest of West Virginia, did invest several million dollars in COVID relief funds to support a women’s shelter, a program that helps people get access to permanent housing and a food truck run by a local soup kitchen, but most of the money has gone to economic development initiatives.

Annie said the city is more focused on trying to rebrand and rebuild after the decline of the coal industry and the pain of the opioid epidemic, and has yet to truly address the underlying issues, including the needs of people who have long been exploited.

“We’re going through a very uncomfortable transitional era in West Virginia, basically for the soul of West Virginia,” said the research scientist specializing in cardiovascular health at Charleston Area Medical Center Memorial Hospital. “This level of pain and mistrust is nothing new. The question is, what we do about it now. Do we ignore it continuously, or do we try and be proactive and trust science finally?”

Solomon, a trained social worker, co-runs the nonprofit Solutions Oriented Addiction Response. He said members of his organization felt a sense of urgency in 2020 when they began setting up tents in church parking lots and handing out sterile syringes.

Syringe access programs are CDC-recommended and scientifically proven methods to prevent disease transmission. At SOAR’s health fairs – located in the part of Charleston with the highest percentage of emergency overdose calls – they conducted HIV testing and distributed naloxone, an overdose reversal drug. They also helped connect people with recovery resources.

But some people in the city were wary. They complained about needle litter, and said the program let people who use drugs keep using. They said the health fairs were introducing new challenges, such as homelessness and mental health issues, to residential neighborhoods.

Jennifer Pharr, a fellow Democrat who is running in the same race as Solomon for one of six at-large seats, said SOAR didn’t spend enough time getting community buy-in and explaining what it was doing before it started handing out needles. It didn’t help that the majority-white-run organization also set up health fairs in the Charleston neighborhood with the highest concentration of Black residents, said Pharr, who is Black.

Pharr, who lost her brother to an overdose, said the issue is personal to a lot of people and she understands their fear.

“You really need to go and knock on the neighbors’ doors and let them know what you’re doing,” she said. “There’s always going to be a collateral circumstance that happens from any good intention.”

State lawmakers responded to the situation by passing new regulations requiring syringe providers to be licensed and needle recipients to show a state ID – something many unhoused people lack – and bring back each needle after use.

The city council followed with an ordinance making it a misdemeanor criminal offense to run an exchange program violating the restrictions, adding fines of $500 to $1,000 per offense.

SOAR shut down its syringe exchange; new HIV cases continued to be reported.

Traveling around the city for three days with a backpack, eating at soup kitchens and sleeping under bridges and in parking lots this past summer, Solomon interviewed residents about the changes they’d like to see. He said many people “just need basic dignity and basic services,” something the city has a rare opportunity to provide.

Annie said he wishes every city official could spend time in his hospital intensive care unit.

“Sometimes it feels like they live in a very different reality than what’s really going on, or they choose not to acknowledge it,” he said.

As a Republican, he’s tried to stress the financial burden of caring for people when addiction goes unaddressed. From 2008 to 2015, Annie’s hospital lost over $13 million treating patients suffering from infective endocarditis, a life-threatening heart inflammation that’s relatively rare outside IV drug users. Many of them are uninsured and have to remain in hospital beds for weeks at a time.

He wants the city and the hospital system to join forces on a harm reduction program – something hospital leadership previously expressed interest in. He said the debate on the legislation restricting syringe exchanges was rife with “misconceptions” and “antiquated notions” about harm reduction and syringe services.

He said it frustrates him when he hears people say more data is needed on HIV and other opioid-related issues in the city, since he’s been the one collecting it.

Griffith, who works at the same hospital as Annie, sees the way people live once they leave. Driving around in her Nissan Maxima, she searches for people in tent encampments, in abandoned houses, in alleyways and offers them food, blankets and support.

“Every day I go out, and I try to help someone save someone, say something that’s going to change their mind and save their life and make them want to be better,” she said. “And every day that I do that, I’m drowning, because it is such a repetitive thing.”

Griffith, now in recovery after years of struggling with substance use and homelessness, said she’d probably be dead if it weren’t for a program that offered clean syringes. When she lost everything, it was a worker she’d met at the syringe exchange who helped her get treatment.

She said people who try to address the problem by criminalizing addiction simply don’t understand it.

“They don’t know about sleeping on the street and wondering where you are going to eat that night,” she said. “Let people who have lived a real life, who come from the streets, try to change things. Our city is dying of drug addiction, so let people who care about what our city is dying from fix the problem.”