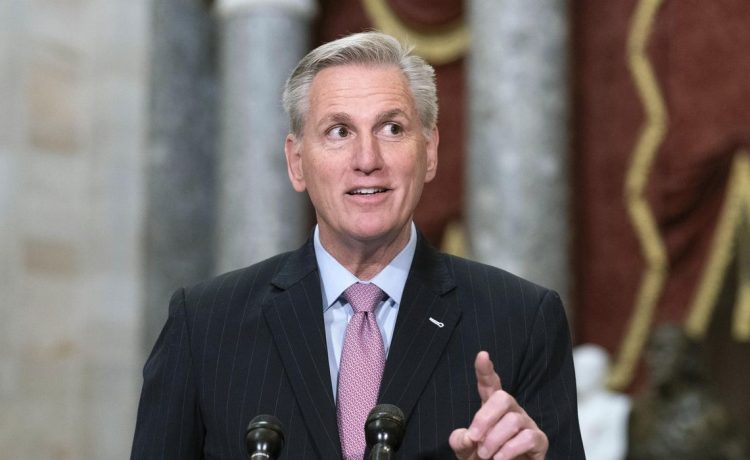 The White House on Tuesday accused House Speaker Kevin McCarthy of failing to own up to the full list of backroom deals with Republican holdouts during his whirlwind bid for the speakership.

White House Deputy Press Secretary Andrew Bates raised fears that the “secret agreements” between Mr. McCarthy and roughly 20 of “the most MAGA members” in the conference could “impact the lives of every American.”

“An unprecedented tax hike on the middle class and a national abortion ban are just a glimpse of the secret, backroom deals Speaker McCarthy made with extreme MAGA members to end this month’s chaotic elections and claim the gavel,” Mr. Bates said. “The American people have a right to know — now — which is why we are calling on him to make every single one of them public immediately.”

Mr. McCarthy, California Republican, won the speakership this month after 15 ballots that spanned days of tense negotiations with a group of ultra-conservative holdouts.

In order to finally clinch victory, Mr. McCarthy made a series of concessions, including a house rules package that will give House members more power to eject him as speaker and a commitment to adopting a fiscal 2024 resolution that balances the federal budget within the decade.

Democrats, and some Republicans, have accused the speaker of keeping other deals close to the vest.

Rep. Nancy Mace, South Carolina Republican, told reporters last week that there are still “some questions that I think many of us have about what side deals may or may not have been made, what promises are made, what handshakes are made.”

Mr. Bates said Tuesday, “The few agreements we know about would fundamentally reshape our economy in a devastating way for working families and criminalize women for making their own health care decisions. They’re also planning to plunge the economy into chaos and take millions of American jobs and 401(k) plans hostage unless they can cut Medicare.”

He added, “What other hidden bargains did Speaker McCarthy make behind closed doors with the most extreme, ultra MAGA members of the House Republican conference?”

President Biden has largely steered clear of direct attacks against Mr. McCarthy and has pledged to reach across the aisle as he rounds the second half of his administration under a divided Congress.

Others have been less diplomatic.

Sidestepping the customary message of congratulations for his House counterpart, the New York Democrat warned that Mr. McCarthy‘s concessions to Republican “extremists” to secure the top spot “could turn into a nightmare for the American people.”

“To get the votes, he surrendered to demands of a fringe element of the Republican party,” Mr. Schumer said. “Kevin McCarthy‘s concessions to the extremists in his party make it far more likely that the MAGA Republican-controlled House will cause a government shutdown or a default with devastating consequences to our country.”

Mr. Bates launched Tuesday’s offensive against Republicans as the White House continues to strain under increasing calls for transparency regarding Mr. Biden’s mishandling of classified documents.

The White House confirmed last week that classified government documents dating back to Mr. Biden’s time as vice president in the Obama White House were discovered at a Washington office building that he used when he was an honorary professor at the University of Pennsylvania.

The documents were discovered on Nov. 2, just six days before the midterm elections. The matter became public only when it was uncovered by CBS News after the midterms.

A second batch of classified documents was later found in Mr. Biden’s Wilmington, Delaware, garage by White House aides. Mr. Biden’s staff notified the Justice Department that it had discovered the second batch on Dec. 20.

The White House has disclosed further findings of classified documents at Mr. Biden’s residence in a series of statements in recent days.

House Republicans have pledged probes into the matter and raised alarm over the White House’s failure to disclose Mr. Biden’s mishandling of the material soon after it was identified.